Round 14: In Soviet France, Eggs Eat You! 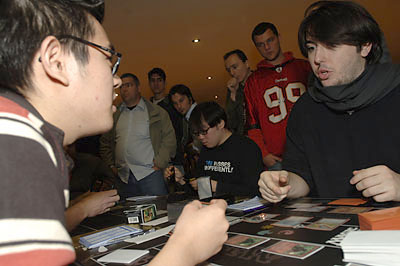 Tiago Chan and Jonathan Rispal growl at each other across the red zone.

players were coming into this round on X-2. The talk was Jonathan's apparently insane deck, a Second Sunrise combination deck created by his fellow team member Sylvain Lauriol. Randy Buehler has been watching the deck in action and called it "probably the best deck in the format," and it was up to Jonathan to prove that claim this round.

"I had a chance if I went first," sighed Tiago, while Jonathan led off with Lotus Bloom, Archeological Dig and Mossfire Egg. Conjurer's Bauble on turn two was certainly more comboish than the beatdown combo Tiago brought to the table with double Kird Ape off a Stomping Gound. Savannah Lions joined the fray, but the Portuguese player didn't look happy as he watched Jonathan search for a card with Cunning Wish.

"You play a deck that no one knows and you have all the cards in French," Tiago complained when Jonathan presented his French Spoils of the Vault. The French player was on twelve life, played Reshape sacrificing a Seat of the Synod to get a second Lotus Bloom into play, and attempted to go off.

One Lotus made three blue mana, and Chromatic Star and Conjurer's Bauble drew their cards. Chromatic Sphere came down, drew a card, and another one. Another Reshape on Lotus Bloom went for a third Lotus Bloom, and with his remaining and filtered mana, Jonathan brought out Second Sunrise. Tiago read the card but could not stop it, and the many little artifacts including three Lotus Blooms came back into play on Jonathan's side. With four cantrip Baubles, Stars and Spheres, the French player drew some cards, used Cunning Wish for Reclaim and returned Second Sunrise to his hand.

Another Reshape enabled him to get another Lotus Bloom, with all four of them now being in his graveyard and being brought back by Second Sunrise. Tiago was relegated to an uninvolved observer as Jonathan cycled through Eggs and Spheres, using glass beads to represent his mana by putting them on the appropriate mana symbol printed on the play area. Orim's Chant from Jonathan prepared the final assault. In response, Tiago reduced Jonathan's life total to 7 with Lightning Helix and Lava Dart, but it didn't matter: Jonathan revealed Pyrite Spellbomb, finally having found a win condition.

His Portuguese opponent made him go through the motions, wanting to see the kill playing out before him. Another Sunrise brought back ten cantrip artifacts and the four Blooms, and Tolarian Winds (a singleton in the deck, just like the Orim's Chant) refilled Jonathan's hand. With Conjurer's Bauble providing second, third and fourth Sunrises, Tiago had seen enough and packed his puny creatures in. 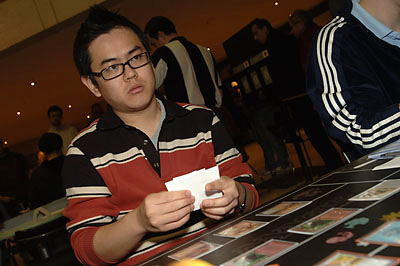 Tiago seemed slightly miffed to have been out cold in Game 1. The Top 8 hopeful didn't like his creatures being marginalized by the combo deck. "This is my fifth feature match in this tournament," Tiago told Jonathan, "but it is the only one where I am just featured because I am your dummy!" And yes, hope was low for the aggro player. His deck could only try to be faster than the combo deck, but the average kill turn of the Boros deck is significantly lower than that of a combo deck, especially since Jonathan again had turn one Lotus Bloom against Tiago's Savannah Lions.

In Vintage or Legacy, Tiago could just have pulled out Null Rod and Jonathan's deck would have dropped dead. But in this Extended format, Tiago had to rely on speed. Isamaru, Hound of Konda joined the first turn Savannah Lions, and Firebolt brought Jonathan to twelve. The combo player turned a Chromatic Sphere into a second Lotus Bloom, with one counter still left on the first one. When Jonathan passed the turn, Tiago knew that he had one, at most two shots at the French player, because with two Blooms and an Egg in play, Jonathan would certainly try to go off.

The Hound and Lions chased Jonathan's life total down to 8, and Tiago was trying to find a way to deal the remaining damage soon. Flooded Strand for Temple Garden gave him the mana to drop Pyrostatic Pillar, the classic anti-combo measure from the red decks. That would make the combo turn for Jonathan that much harder, so what outs could he present? Being at 6 life meant playing just three cheap spells, and he would need more than that to win.

Cephalid Coliseum, though, was still free to put down. Jonathan thought deep. He sacrificed his two Loti and played Second Sunrise for both Loti and an Egg, going down to 4 life. Engineered Explosives from Jonathan came down with two counters on it and provided the out that Tiago feared, destroying the Pillar. Coliseum drew three cards for the French player, and from that point Tiago could only look on... but no, wait! Jonathan had forgotten to discard three. The nearby judge intervened, asked Jonathan which cards he drew from a Chromatic Sphere he had sacrificed earlier. He ascertained it was a Pyrite Spellbomb, handed Jonathan the requisite warning and made him discard three.

Tiago didn't like just sitting there, and asked Jonathan if he had a win in hand because he would just concede. Jonathan answered: "No, no, you can still win, I have no Second Sunrise." And true enough, one activation of Conjurer's Bauble later, Jonathan packed up his cards, drawing nothing, out of mana, and dead on the board.

Tiago did not expect that win, having already resigned himself to his self-proclaimed role as Jonathan's dummy. He brought back in two Lava Dart, taking out two Silver Knights in the process in the hope of burning Jonathan out. 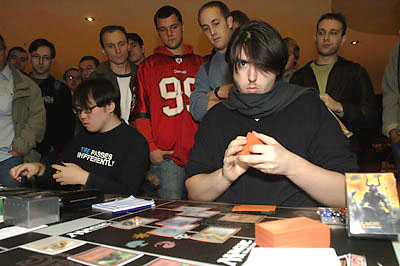 Welcome to my lair, Mr. Chan…

Tiago's initial hand contained land, two Savannah Lions, and two Molten Rain. After some thought, he decided to keep, but Jonathan spoiled his hopes by making his third first-turn Lotus Bloom in a row, followed by Pyrite Spellbomb. Instead of killing the Lions Tiago made, Jonathan decided to draw with the Spellbomb, and put down an Egg and Chromatic Sphere - but he didn't have the mana for both. As Tiago was about to take his turn, Jonathan noticed and returned the Sphere to his hand with an apology. Tiago let it slide, and so did the judge right behind him.

Tiago made Pyrostatic Pillar on his second turn, making Jonathan take two damage from his now legitimately played Chromatic Sphere. The French combo pilot was still at a comfortable 16. Tiago was sitting up alertly in his chair, now smelling a real chance to get into this game with his Molten Rains raining down on Jonathan's lands. Tiago targeted Jonathan's Ghost Quarter, maybe hoping to deal two damage, but of course Jonathan made Tiago trade his R/W dual for a basic land, and with its target gone, the damage from Molten Rain never happened.

Tiago (on 10 life) took Jonathan to 8 with a pair of Savannah Lions, destroyed one of his Islands with the other Molten Rain and detracted 2 more points from Jonathan's life total when Jonathan played Cunning Wish. Jonathan went for Angel's Grace and played it, negating the Pillar's effect for one turn. But it was the turn that he would have to win from a board position of two Islands, a Lotus Bloom and a Chromatic Sphere. Sacrificing Lotus and playing Reshape turned the Sphere into another Lotus, and Second Sunrise came and brought back two Loti, Chromatic Sphere and a Darkwater Egg.

A second Reshape pulled out Lotus Bloom #3, but Jonathan would need another Second Sunrise. Egg followed on Egg, and Mystical Teachings sought out the Second Sunrise that Jonathan needed. The judge had to clarify on Jonathan's mana and the French player did not seem entirely comfortable with keeping track of so many things at once. Even though he used the printed mana symbols on the play area, both the judge and Tiago kept a hawkeye watch on Jonathan as he cycled through Eggs and Spheres to find a third Second Sunrise.

When Jonathan Reshaped for another Lotus and played Mystical Teachings, the following Second Sunrise brought four Loti and many Eggs into play. Now it was really just going through the motions for the French player. The already familiar loop of Mystical Teachings and Second Sunrise happened and all that Jonathan needed was to find a win condition. He had his Baubles to return Sunrises and Teachings, and nothing was stopping him even though he had to hurry up to meet the clock.

Then, Jonathan accidentally knocked the top card of his deck to the ground, and the judge decided on putting it back in and reshuffling the deck, including a Second Sunrise that had been put on the bottom with Conjurer's Bauble. Jonathan cashed in a second warning and a reprimand from the judge to play slower and more precisely, but Tiago still seemed unhappy.

The Portuguese pro still had a shot. He made Jonathan go through the motions instead of conceding. The match could still go to time, and Jonathan could still make mistakes. Finally, Jonathan had drawn his entire deck and could start to recycle Pyrite Spellbomb. At that point, Tiago graciously extended the hand and accepted defeat.

After the match, Jonathan apologized to Tiago for the mistakes and explained why: "I have only ten matches with the deck."