Round 14: Stephan Meyer vs. Stefan Jedlicka 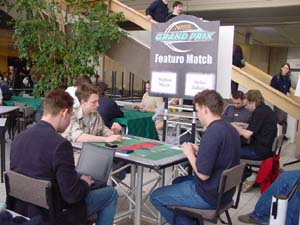 After a deck check, Stephan Meyer got a game loss because he forgot to de-sideboard a card from the last round.

Meyer chose to play first, both players kept their hands. His green/red deck managed a turn 2 Wellwisher, but no face down card on turn 3, which Jedlicka's red/blue deck didn't miss. Jed's secret agent turned out to be Skirk Commando, who killed Meyer's freshly cast Wirewood Channeler once he went through. Meyer's Wall of Mulch held the ground for some time, while Jedlicka went to the air with Airdrop Condor and Sage Aven.

Hundroog hit the table turn 7, but lost his use as a blocker, as Jedlicka played Frenetic Raptor next turn. Meyer's plan was to race and he cast a hasted Macetail Hystrodon, which promptly went to the red zone with his beast brother, putting Jedlicka at 12. Essence Fracture managed some tempo advantage for Jedlicka, who swung with his army, trading a Skirk Commando for a Wellwisher while Wall of Mulch blocked the 6/6 beast.

Hundroog came back to the board, still unable to block and Meyer took 9. A morph was played in the second main phase, which turned out to be echo tracer, ready to bounce Hundroog and block the recast Macetail Hystrodon. A second Wall of Mulch was Meyer's last defense line, but Echo Tracer's twin was waiting in Jedlicka's hand to bounce the wall and let the Red/Blue rush come to an end.