"It's absolutely insane. There have been like two or three Slovakian or Czech players playing for Top 8 in every event from the last year."
-Martin Juza

In Juza's words, Stanislav Cifka is "running so hot this tournament". Despite accusations that his drafting can be "erratic", Cifka managed a perfect 6-0 over the Draft rounds of the tournament. As for Modern, this Slovakian chess Grandmaster has picked an ideally matched deck, Second Sunrise/Eggs/Second Breakfast. Whichever name floats your boat. Cifka has steered his way through turn after intricate turn on a way to a dominating undefeated record in the Swiss here in Seattle.

His opponent this round is Bruce Pai, from Chinese Taipei. Pai has had almost as successful a run here at Pro Tour Return to Ravnica. He has had only one loss and one draw so far in this tournament. Now it is up to him to take his Jund deck up against the only remaining undefeated player and knock him from his pedestal. 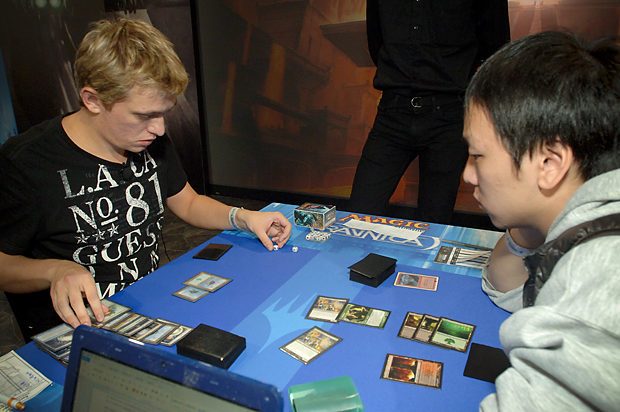 Stanislav is looking to keep serving up beats with Second Breakfast, his brutal and undefeated Second Sunrise deck. His opponent, Bruce Pai, is hoping to finally crack his opponent's winning streak.

Both players opened with a mulligan in the first game. On the draw, Cifka began setting up for his ultimate turn with a Lotus Bloom and a Chromatic Sphere on his first turn. Pai started with a Dark Confidant on his second turn, revealing a Lightning Bolt on the first upkeep he lived through. He got to attack for two, dropping Cifka to 18. After combat, Pai made a second Confidant, shortening both players' clocks.

Cifka's Bloom ticked down to one counter left. He played and sacrificed a Misty Rainforest to fetch an Island before playing an Elsewhere Flask. Next turn, his Lotus Bloom would come off suspend and he would have his first crack at his combo. Pai revealed a pair of lands for his Confidants before attacking for 4, dropping Cifka to 10. After combat, he played a Tarmogoyf and then passed the turn to Cifka, anxiously awaiting the Slovakian's big turn.

The Bloom hit the table. Cifka began his combo. First, he used a Ghost Quarter to kill his own Island, placing two lands into the graveyard to increase his mana when they came back from the graveyard. He sacrificed his Chromatic Sphere for mana and used Reshape to sacrifice his Elsewhere Flask for a Lotus Bloom, which he also sacrificed for mana. He then played a second Ghost Quarter and replaced one more of his Islands. With that done, and his graveyard full for the initial burst, he cast Second Sunrise, returning the four lands and all of the artifacts to play. He once again began replacing his own lands with Ghost Quarter, fetching a Plains and an Island. He used another Reshape to turn the Elsewhere Flask into a Lotus Bloom. At this point, he began to sacrifice all of his artifacts for mana, eventually hitting six white and one blue mana before casting a second Second Sunrise. 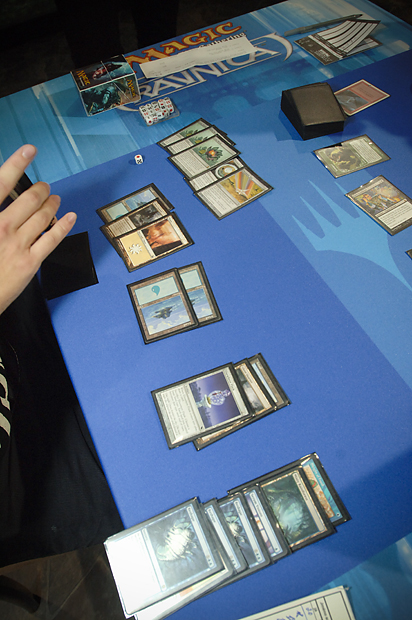 Once again, Cifka flooded the table with the permanents he had himself sacrificed. This is the general engine for the deck. Each iteration increases his mana and thins his deck. Eventually, he will find a Conjurer's Bauble and Pyrite Spellbomb and will have thinned out his deck to the point that he is able to ensure that every card in his library is either the Bauble, Spellbomb, or a Second Sunrise. Then, he can simply use the Spellbomb to hit Pai for two, return it with Second Sunrise until he has no more left to cast, and then recycle Sunrise with his Conjurer's Bauble. Lather, rinse, repeat.

Sure enough, over the remainder of the five minute turn, Cifka set about making this come to fruition. When he finally got the Bauble and Spellbomb in play, he was already down to only five cards left in his deck. The simple use of his Chromatic artifacts to draw the rest allowed him to begin to cycle through the combo. It only took one iteration for Pai to concede the first game to Cifka.

Every deck in Modern has a method of dealing with graveyard recursion, either before or after sideboarding. Pai's Jund deck is no different. Likely running Jund Charm as a method to remove the graveyard, it is likely that more than one copy of the Charm and perhaps a Relic of Progenitus or two sneak in from the sideboard. It isn't like Cifka is incredibly deterred by that, however. In Round 12, Cifka responded to a Jund Charm cast by none other than Players Championship winner Yuuya Watanabe by using a second Second Sunrise in response to the Charm to return all of the cards to play before letting the Jund Charm resolve. The Slovakian and Czech players running Second Sunrise today all know that the Jund decks are likely running the Charm, and they are prepared and playing around it.

Pai chose to go first, this time keeping his initial hand. Cifka had a Leyline of Sanctity to protect himself before the game began, ensuring that he would be safe from the player-targeted effects from Pai's deck. Again, Cifka began setting up his big turn on the very first one, using a Sleight of Hand to search up a Lotus Bloom, immediately suspending it. Pai's open was a little more aggressive than the last, this time using a Tarmogoyf to beat down instead of the Dark Confidant. A Kitchen Finks added two points of meaningless life, but three power of meaningful attacker to the table. Cifka continued digging, using a Serum Visions to sift before adding a Chromatic Star and a Conjurer's Bauble to his side before Reshaping for a Lotus Bloom and passing the turn. 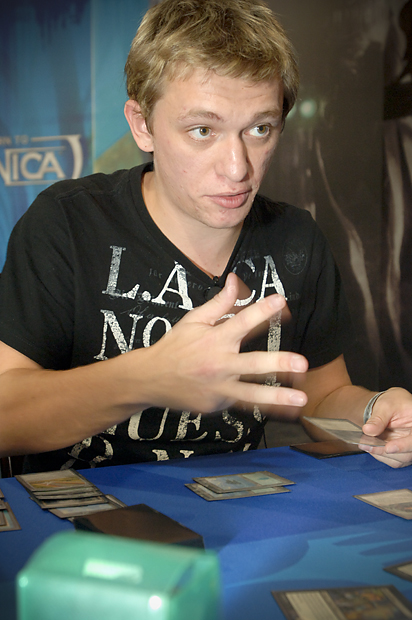 Cifka's combos have been crushing opponents all weekend.

Pai found a perfect Bloodbraid Elf, but his cascaded Blightning was nullified by the Leyline. Rather than cast it, he simply put it on the bottom of his library. Still, the three power of haste was enough to knock Cifka down to 9 life. Unfortunately, Cifka's Bloom was coming off suspend next turn, thus he was likely to begin the process of going off, especially since Pai was tapped out. He began by sacrificing his artifacts, drawing cards and generating a small excess of mana before he cast Second Sunrise, returning two Chromatic Spheres, two Lotus Blooms, a Conjuor's Bauble, and two Chromatic Stars to play. When he used Reshape to fetch out a third Lotus Bloom, his combo became as elementary as it had the last game. Artifacts came and went, Second Sunrises and Faith's Rewards were cast. Pai picked up his cards and considered conceding for quite some time. Watching the look on his face, you can tell how agonizingly boring it is to be the player on the other side of someone going off with Second Sunrise.

Sunrise is like the thousand cuts. It takes forever, but it's even more inevitable than the Storm deck is. Once the Sunrise player starts going off, ninety percent of the time, you are going to die.

Fortunately for Pai, Cifka was feeling merciful today, killing him about fifteen minutes earlier than he could have with a Grapeshot. Pai looked dejected yet relieved, ready to leave the feature match area after that staggering defeat.