Round 14: Surface to Air Missiles

By by Blake Rasmussen 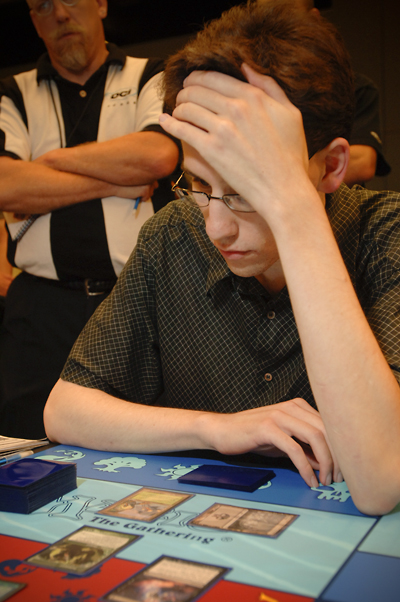 Sam Black, with Black-Green Elves, thinks hard.This was it. Sam vs. Sam for all the marbles, the whole enchilada, shebang, and nine yards. With both players at 30 points and unable to draw in, it was win and in. Both players briefly discussed the merits of drawing and trusting to their tiebreakers, but eventually opted for the do-or-die Round 14. It was the new classic matchup of Sam Black's Black-Green Elves against Sam Stein's Faeries.

Stein checked his hand first, and kept after considerable, um, consideration. Black kept his as well.

Black started with Treetop Village to Stein's two foily Islands. An unimposing 0/1 Tarmogoyf resolved to start, well, not doing much of anything...

...Until Black laid Thoughtseize on the table, that is. This prompted a Vendilion Clique from Stein, revealing lands, Slaughter Pact, and Profane Command. Stein chose to take the Command. Then it was Black's turn to peek at his opponent's hand, which revealed Cryptic Command, Rune Snag, Bitterblossom, Terror, and Mistbind Clique, all of which were unplayable (save the Rune Snag) with only two Islands and a Mutavault. Nameless Inversion cleared out the Clique in play and made Tarmogoyf, which was recently a 0/1, rather testy.

Terror, however, put Goyf to bed. Stein attacked with Mutavault only to watch it fall to Slaughter Pact.

Stein played draw-go, prompting Black to play "mother may I" with an animated Treetop Villiage. Cyrptic Command bounced the Treetop to set Black back a turn.

Another turn of draw-go from Sam... er... Stein paved the way for a second Cryptic Command to counter Chameleon Colossus.

Draw-go once more prompted a Thoughtseize from Black, which met the wrong end of a Spellstutter Sprite (that would be the counterspell end).

Stein finally entered the red zone with a Pendelhaven-backed sprite, which then was championed on Black's upkeep to make way for Mistbind Clique and the Mana Short Kids.

Stein really started rolling when he championed the Mistbind Clique with a second, which brought back the 1/1. One turn and one attack later it was on to Game 2.

With the stakes as high as they were, both players sideboarded and shuffled up in relative silence. For Black, he had one game to keep his shot at the top eight, for Stein he was one game away from a return ticket to the McCormick Place Convention Center on Sunday.

Both players kept their opening hands.

Black led with a Boreal Druid off of a Pendelhaven, and Stein countered with his own one-drop, Ancestral Vision. 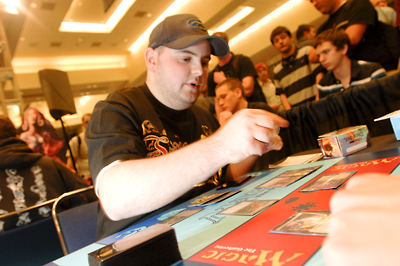 Sam Stein flies high with Faeries.Black had the requisite Imperious Perfect on turn two, but Stein had the Terror. Black, naturally, summoned a second Perfect and swung for 2.

Thoughtseize from Stein revealed Kitchen Finks, Squall Line, and a Wren's Run Vanquisher. Stein considered his options carefully before eventually dropping the Kitchen Finks, a notoriously tough creature for Faeries to handle, into the graveyard. Awkwardly, there was no third land for Stein to follow up, a hiccup that would cost him.

When the top of his library revealed yet another land, Black had his own semi-awkward moment, paying the full five to summon his Vanquisher.

Stein played draw, miss a land drop, go again. Even though Vision was one turn from ticking in, Stein still found himself facing eight power with only 14 life and three mana to play with.

Make that 12, as Thoughtseize took out Squall Line and left Black completely empty-handed.

Chameleon Colossus off the top, however, prompted the quick concession. There isn't much Faeries can do against an army on only three mana, no matter how many cards they've drawn.

Though a Top 8 berth was on the line, both players remained calm and collected, even as Stein bemoaned his hand and his fate from Game 2.

On the play this time, Stein was visibly upset about his hand, but opted to keep anyway.

Black liked his cards as well... all eight of them. Two sleeves had stuck together, forcing him to mulligan anyway. The sticky mistake proved costly as the six card hand was far from acceptable and was quickly sent back.

"This isn't the way to do this," said Stein.

"Yeah, I'm pretty sure if I only draw the top seven cards of my library, I win that game," said Black.

Carefully unsticking his cards one more time, Black finally found a hand he could keep.

Stein led with two Ancestral Visions on turns one and two, while Black had Llanowar Elves into Wren's Run Vanquisher and Treetop Villiage, for a pretty strong five-card start.

Stein, aware that his card advantage should eventually pull him through, Thoughtseized away a Squall line, leaving only a Forest and a Nameless Inversion in Black's quickly dwindling hand.

Still, Black pressed his early board presence, attacking for seven with the Treetop Villiage, Vanquisher and Llanowar Elf.

Draw-go from Stein was met by a somewhat hesitant attack from Black, who knew that he couldn't afford to wait for both Ancestral Visions to resolve. Stein, trading damage for time, sacrificed his Faerie Conclave to trade with Llanowar Elves. Black simply replaced it with another from the top of his deck.

Stein played a main-phase Vendillion Clique to dodge the Nameless Inversion, sending it to the bottom of the library, and ended with a Mutavault. 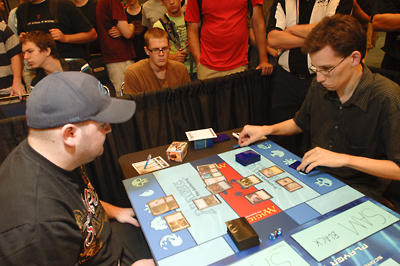 Sam vs. Sam for all the marbles.On his turn, Black started doing the math on his fingers and eventually chose to play an Imperious Perfect and send in Llanowar Elves and Wren's Run Vanquisher against the Vendilion Clique. With Stein at 5, he traded the Clique for the Llanowar Elves and fell to one.

Hope, however, came in the form of his second Ancestral Vision, sending Stein deep into the tank. Eventually, he chose to pass the turn and discard a now useless Thoughtseize.

Then, 1 life away from the Top 8, it was Black's turn to take his time doing the math. He knew that every turn he gave Faeries was a turn Cryptic Command could turn it around. Eventually, Black simply declared his attack phase, choosing to leave Treetop Villiage un-animated. With no Cryptic in sight, Black swung with his Imperious Perfect and Vanquisher. An animated Mutavault blocked to trade with the Perfect, and Cryptic Command bounced the Vanquisher, which was subsequently re-played. Stein escaped the pivotal turn, but at the loss of one land. In the Faeries vs. Elves match, bottlenecking on mana could prove costly. Not to mention that sitting at only 1 life, Thoughtseize and Bitterblossom had become dead draws.

During Black's upkeep, Mistbind Clique went to tap him down and, hopefully, buy another turn. In response, Black floated four (which could have been funneled into Treetop Village if needed) and went to his draw step. Once there he was greeted by... Squall Line off the top, for the win.

"It was completely correct to float the mana, since I had Treetop," said Black. "And in all fairness, I play three Slaughter Pacts too, so I had a total of seven outs there."

And, just like that, Sam Black was on to the Top 8 of the 2008 U.S. National Championships.