Round 14: Teruya Kakumae vs. Akihiro Takakuwa 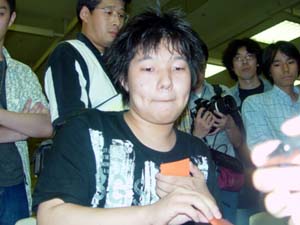 Takakuwa is a Limited specialist out of Tokyo, whose draft skills are highly acclaimed. In fact, he will be teaming with Koichiro Maki and Akira Asahara at the next team Pro Tour, which should speak volumes about how well respected his talents are. A win here would guarantee him a spot in the Top 8, while a win will only put Kakumae in contention via tiebreakers.

Kakumae mana burned on his first turn (for Pulse of the Forge), and played a Talisman on turn two. Takakuwa's Ravenous Rats caused Kakumae to lose a Great Furnace, and Kakuwae took more damage from his Talisman. He untapped, activated his Blinkmoth Nexus, and attacked for one. Takakuwa swung back with his Rats, and Kakumae burned once more. After another Rats attack, Kakumae cast Pulse of the Forge on end step, getting it back. He then took two more burn to go down to nine, while Takakuwa was at fourteen due to painlands. A Rat attack brought Kakume down to seven, and Takakuwa played Siege Gang Commander. The Pulse brought Takakuwa down to nine, and Pyroclasm cleared the board. A Blinkmoth attack put Takakuwa at eight, where a double Pulse shot did the rest. 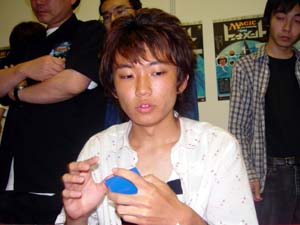 Takakuwa mulliganed his opening hand. Both players had Talismans, and Kakumae used Molten Rain to destroy Takakuwa's forest. On the following turn he played Solemn Simulacrum, and Takukawa's morph creature (Nantuko Vigilante) was killed by Electrostatic Bolt. The Simulacrum attacked for two, and Takakuwa played Ravenous Rats, then drew cards off it thanks to Skullclamp. Kakumae surprisingly decided to Shatter a Talisman instead of Skullclamp, and Takakuwa played Siege Gang Commander. It blocked the Simulacrum, and after damage went on the stack, Kakumae sacrificed it to Shrapnel Blast, bringing Takakuwa down to nine. Takakuwa cycled through his Goblin tokens with Skullclamp, and played Ravenous Rats, causing Kakumae to discard a Great Furnace. On end step, Kakumae had another Shrapnel Blast to bring Takakuwa down to four, but this left him with no cards in hand. Pulse of the Forge was waiting on top of the library, and when Kakumae cast it, the crowd around the table reacted with a tone that describes "How lucky!" no mater what language you speak.