Round 14: On the Threshold

This is a pretty important round for each of these players. For Roel, a win here will be enough to make him Level 3 in the Pro Players Club—secure with another year's invites on tour. For Raphael, it is something much bigger; a win would mean Level 6 as well as keeping him on course for what could be an incredible run. If he wins the entire tournament, he could snatch the Player of the Year title. The season following Levy's induction into the Hall of Fame has without doubt been the most successful of his Magic career to date. 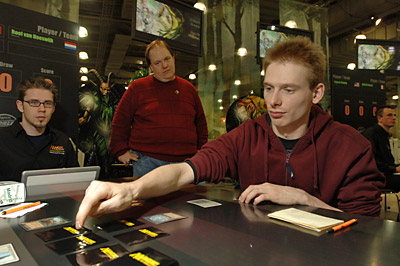 Roel van Heeswijk forces a random discard. Levy won the coin flip, and led off with a fetchland into Nimble Mongoose, flying the flag of the Threshold deck with his very first play. Roel began with a Dark Ritual into Hymn to Tourach, knocking out Force of Will and Swords to Plowshares. Levy had the ideal engine to recover from losing a few cards in the form of Dark Confidant, but this was taken out by Dark Ritual and Vindicate from Roel, who had taken mana burn from his Dark Rituals two turns in a row.

Levy had a second Nimble Mongoose, but each was trumped by a Tarmogoyf from van Heeswijk, and a Wasteland that left Levy without access to black mana. Raph did manage to get to threshold the following turn, but in the face of Tarmogoyf, and the Dark Confidant that joined it, pushing through damage was getting a touch tricky.

The answer of choice from Levy was Engineered Explosives for two. It didn't hang around long enough to get blown up though, as Vindicate dealt with the pesky artifact before it could kill Tarmogoyf, pumping it further.

In terms of board position, the game was a study in inaction. Neither player committed to an attack, and while Roel was getting more cards in hand from Bob, it was coming at a price. The onus was on him to go on the offensive, and to do so he played out Nantuko Shade and a second copy of Dark Confidant. The Shade got to rumble in for damage, and Roel had Hypnotic Specter to join it for the following turn. Dark Ritual allowed for a second Specter, leaving Roel's board big enough that he would be pretty terrifying on attacks.

"Nice collection there," remarked Levy with a chuckle as he watched Roel drop to 7 on his upkeep from pair of Dark Confidants charging Roel for the privilege of all those extra cards.

Roel rumbled in with one Specter, Tarmogoyf, the Shade and Bob, forcing Raph to block with his pair of Mongeese to survive. The following turn, without defences, but with a whole pile of land, Levy was forced to scoop it up.

Given his opportunity, Levy played out Counterbalance. It didn't manage to get Roel's Dark Confidant, but was soon made a lot better by a Sensei's Divining Top. Between fectchlands, Thoughtseize, and Bob, Roel was doing quite a number on his own life total, and he got his beat on with Bob in the hopes of leveling the scores a little—though with a Nimble Mongoose swinging back, and more of a life buffer, it was a race Levy looked likely to win, in spite of the fact that he wasn't working to play any more threats.

Roel had to look on as Levy now replayed his Top, and a Tarmogoyf to join it. On his turn he went to 6 off Bob, before playing Vindicate targeting Tarmogoyf. Counterbalance couldn't stop that one, and while Roel did win himself a warning by getting all confused by the Counterbalance trigger, and treating it as a clash, he did kill the green monster.

With a Ponder, Levy managed to achieve threshold, turning his Nimble Mongoose into a 3/3. On the attacks, Roel dropped to 3, and Levy looked to drop the hammer blow, with a Dark Confidant as backup beats. Bob never got a chance to back up his buddy Tarmogoyf, as he got hit by Vindicate. Seeing as the first Vindicate worked, Counterbalance got hit by one too.

Nothing could stop the Nimble Mongoose, though, who got through just enough to level up the game. 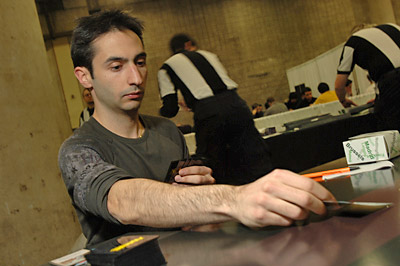 Raphael Levy fights hard, on the cusp of Level 6 On the play for the first time, Roel led with Thoughtseize, seeing Polluted Delta, Underground Sea, Dark Confidant, Daze, Brainstorm, and two copies of Threads of Disloyalty. One of the Threads got hit by the sorcery, while Roel, who had used a fetchland on his opener, started the game on 17 life before Levy had even taken a turn.

Raph drew, and played the Nimble Mongoose that had been waiting for him on top of his deck. While van Heeswijk had no action, Levy was quick to follow up with Dark Confidant, swinging all the way.

Roel tried a Smother on Bob, but Daze stopped that plan. It took the second Smother to do it, and a Wasteland on Underground Sea left Raph with just a Nimble Mongoose, who attacked Roel down to 15.

By the time that Roel had a Dark Confidant, he was being attacked down to 9 by a 3/3 Nimble Mongoose, and Raph had a Sensei's Divining Top on the board. He played a Tarmogoyf, but found a Force of Will awaiting him, leaving just one card in Raph's hand. The second Tarmogoyf stuck. Unfortunately for Roel, there was one from Levy to match, and the deciding damage source in the game became van Heeswijk's own Dark Confidant.

Roel added a Nantuko Husk to his side of the board, but looked nervous as he shuffled his hand on Levy's turn. He couldn't afford much more damage from Bob, and with blockers, it was unclear if he could force through enough damage in time.

Dark Confidant revealed Swords to Plowshares, dropping Roel to 4, but offering him a way of gaining some life, and time, should he need to, by removing one of his own creatures. A Vindicate targeted Levy's Tarmogoyf, and forced Raph to activate his Divining Top to play Daze. Roel paid the mana, and the monster died. Another Wasteland again left Raph with just that Mongoose. Tarmogoyf attacked Raph to 10, and Roel passed.

When Levy rumbled in with his Nimble Mongoose, van Heeswijk was quick to let his Dark Confidant die to it. Without blockers, he was able to attack back and just secure the win.