Tom van de LogtIn the last round of Grand Prix Lisbon, the esteemed World Champion faced off against Pro Tour regular Daniele Canavesi, in the battle for Top 8.

In this match-up, Tom's viciously metagamed Red Deck faced off against Canavesi's three Deuce deck, that he has piloted for two seasons straight, with only minor modifications.

Canavesi won the dice roll and chose to play first.

Daniele opened with a Savannah and a Granger Guildmage, which Tom promptly Firebolted. Canavesi then made a Skyshroud Elite, which was also Firebolted.

Daniele decided to make a creature that was more difficult to kill, so made a River Boa with one green free to regenerate. Tom made a Chimeric Idol to block the River Boa, but Daniele had a Seal of Cleansing and attacked Tom down to eighteen.

Tom untapped and said "Go", hoping Daniele would play another land and tap his Wasteland, meaning Tom could Price of Progress for ten. That's exactly what happened as Daniele activated his Village to attack for five before making a Mogg Fanatic.

Tom untapped from his Price of Progress and cast Incinerate, Incinerate and Fireblast to finish him off.

Daniele chose to go first, and opened with a Treetop Village. Tom opened with a Barbarian Ring and made a Jackal Pup. Canavesi then unleashed his sideboard technology, a second turn Sanctimony. Tom attacked Daniele down to eighteen, before making a second Pup. Daniele answered with a River boa which Tom Incinerated before attacking Daniele down to fifteen, almost in Price range. 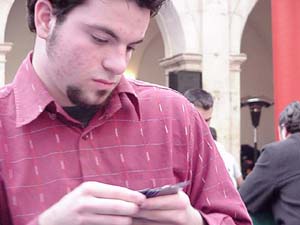 Daniele Canavesi Daniele then made a Call of the Herd token, and passed the turn. Tom then cast Volcanic Hammer on the Elephant before attacking Daniele down to twelve. Daniele cast a Land Grant on his turn, looking for a Taiga to help him kill one of those Pesky Pups, which he looked to achieve with a Mogg Fanatic and a Cursed Scroll. Tom Seal of Fired the Fanatic, then attacked for two with his remaining Pup. Tom then played a Wasteland and made a Chimeric Idol, giving Daniele two life, back up to twelve.

When Tom next attacked with his Pup, Daniele had an Incinerate ready, and dealt with the Pup. At this point Daniele was at twelve, and Tom is at eleven. Tom used the Wasteland on Danielle's Treetop Village, and both players did nothing for a turn.

Daniele played a Wasteland and played his Call of the Herd from the Graveyard, and on the next turn made a second Sanctimony. Tom made a Chimeric Idol, then Fireblasted the Elephant leaving Daniele, with only his two Sanctimonies to save him. Daniele Wastelanded Tom's Barbarian Ring to deny his mana, but Tom had a back up, on the top of his deck.

Tom then attacked with the Chimeric Idol, and Daniele then activated the Cursed Scroll to take Tom down to eight. Tom incinerated Daniele down to 12 (from 13), and then attacked with the Idol down to nine. Tom went down to five at end of turn, as Daniele successfully scrolled him naming Taiga. Daniele untapped and played a land, walking straight into Tom's Price of Progress, which was enough to Seal the deal, when backed by an attack from the Idol, or sooner if he had realized he could put the life gain from Sanctimony on the stack.