Round 14: Tommi Hovi vs. Eric Froehlich 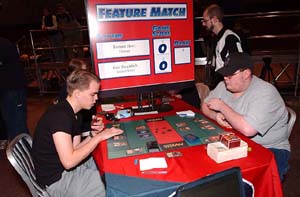 After New Orleans wrapped up, the buzz was that no one would ever beat Kai's five Pro Tour victories. While it may take some time to happen, two players with two Pro Tour championships played in the final round of Pro Tour San Diego for a shot at the Top 8: Dirk Baberowski and Tommi Hovi. The only thing between Hovi and yet another Top 8, and a shot at a third Pro Tour title is Eric Froehlich. His name may be unfamiliar to most players, but he does have a record of solid finishes. He came in 14th at Pro Tour Los Angeles last year, Top 8 of Grand Prix Columbus, and Top 8 of Pro Tour New York in September. He's looking to build on his reputation with his first Top 8, but has to get through a two-time Pro Tour champ first.

Froehlich mulliganed his opening hand, and Hovi cast Chatter of the Squirrel on turn one. Wild Mongrel was summoned by Froehlich on turn two, and Froehlich joked, "Can I draw one more card to make up for that mulligan? That would make my hand significantly better." Werebear was cast by Froehlich, but was burned away with Engulfing Flames. Froehlich's Mongrel and Hovi's two squirrels exchanged blows, while Hovi missed his fourth land drop and played Ember Beast. Froehlich was also slightly mana screwed, missing his fifth land drop. 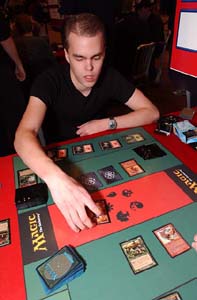 Hovi drew a fourth land and summoned Nantuko Disciple, which was burned away with Firebolt, and Froehlich brought out Barbarian Lunatic. Thermal Blast on Wild Mongrel occurred on the following turn, and Froehlich discarded Refresh and Frenetic Ogre to keep it alive. This allowed Hovi's squirrels to attack for another two points of damage. Froehlich bashed with the Barbarian and left the Mongrel on the defensive. Hovi went all out, attacking with his two squirrels and the Beast. A squirrel died in combat to the Mongrel, but four points of damage came through. Hovi then applied more pressure by summoning Rabid Elephant.

This left Hovi with the convenience of having a very hard to kill attacker, so he was able to keep his other creatures on defense while Rabid Elephant acted as a victory condition. A second Chatter brought his squirrel count up to three. Ember Beast and Rabid Elephant attacked together, and the Barbarian blocked and killed the Beast. Hovi's Halberdier traded with another Lunatic, and a second Halberdier came out, only to die to Firebolt. At this point, Froehlich had only one card in hand, and a Wild Mongrel was his only creature. Thermal Blast finished the job.

Froehlich started shuffling and told Hovi "I hate this game. So much." Hovi told Froehlich, "If I lose this match, I hope you win the whole tournament." Froehlich joked around, asking "We can just save some time and go to Game 3."

Froehlich then turned to me and said "How bad is it when we're discussing the matchup before we start and I tell him I think are decks are pretty even...and then he laughs at me?"

This game started off with a mirrored board: mountain, forest and Werebear on both sides. Hovi accelerated into a turn three Halberdier, while Froehlich played his fifth mana source and had nothing. Hovi then summoned Leaf Dancer and powered it up with Reckless Charge. It went into combat along with Halberdier, but Froehlich had Moment's Peace. He then untapped, and played one of his trump cards: Kamahl, Pit Fighter. The Halberdier and Leaf Dancer attacked and were not blocked, while Kamahl shot down Werebear in the attack step. Hovi was stuck at three lands, and obviously did not have an answer to Kamahl in hand that he could play.

Froehlich untapped and attacked with Werebear, and summoned Dwarven Grunt, declaring "Double clock! I definitely have some bad cards in my deck." Kamahl shot down Halberdier, and Hovi bought a little time with Chatter. Regardless, Froehlich turned the game from "favorable" to "excessively obscene" by playing Overrun, and attacking for the win. Hovi showed his hand containing Shower of Coals, and was obviously annoyed that he could not draw into a fifth mana source. 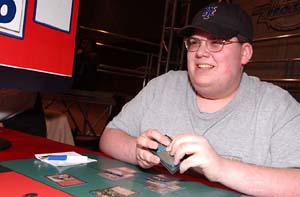 Hovi opened with Chatter on turns one and two, while Froehlich two-dropped a Werebear. Flame Burst took down Werebear, and Froehlich brought the board to a mirror by playing and flashing back Chatter. Hovi sent in his squirrel army, and Froehlich blocked and traded with one. Hovi said go, missing his four land drop. He seemed at least amused by the situation, as he leaned forward and smiled. Froehlich continued to build with Ember Beast, and Froehlich was visibly excited to have the game within his grasp. The squirrel and Beast attacked. Hovi blocked squirrel for squirrel, and both players cast Refresh. However, Froehlich responded to Hovi's Refresh with Flame Burst.

Hovi drew for the next three turns and still couldn't find a third land, and was eventually finished off. Still, he was all smiles for a guy who just got mana screwed out of the Top 8. He told Froehlich "Good job", and said so in a completely genuine tone with no tone of sarcasm. This was a great show of class on Hovi's part. He took getting mana screwed of the Top 8 very well, but he probably doesn't mind as much since he's been there before. Eric Froehlich however, is headed for his first Pro Tour Sunday.