Round 14: Tricks and Traps

nearing the end of the road now. Both of these players are in spitting distance of the Top 8. Wins here and in the last round will place one competitor squarely in Sunday territory. Before dreams of Day Three glory, these two Japanese masters needed to duel. 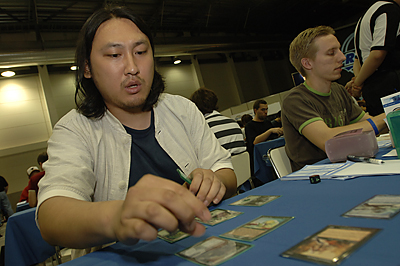 Things started about as badly as they could for Kitamaya, as he mulliganed to a back-breaking four cards on the play. Despite the turn-zero Fugue, Kitamaya actually put up a fight with sequential morphs (Soul Collector and Fortune Thief). Unfortunately for Kitamaya, Kenji's draw was excellent. Looter il-Kor, Crookclaw Transmuter, and Stromcloud Djinn put Kenji squarely in the driver's seat. Too soon, Kitamaya was forced to rely on his Ali From Cairo clone, praying his opponent's black-blue deck couldn't find an answer to a 0/1 red creature. After Kitamaya tapped out to play Pardic Dragon, Kenji killed Kitamaya in style, with Ixidron giving him a morph-swarm kill. Whatever does the job!

Kenji suffered a reversal of fortune this game, as he was the one forced to take a trip to mulligan-town. Kitamaya felt good with his initial seven, again leading with a face-down Soul Collector. Kenji started his own beat squad, with a turn two-Coral Trickster going into Looter il-Kor going into a morph. Kitamaya was stuck on his original three lands this game, but boldly chose not to cast Strangling Soot on the unblockable Looter. Kenji improved his hand and made another morph. A Subterranean Shambler off the top mocked Kitamaya, as he still needed a fourth land to do much of anything. Again the Looter came in. Kenji made a Stormcloud Djinn, which did taste a Soot. Kitamaya finally found his fourth land, managing to cast the Shambler and wipe the board of Kenji's blue creatures. 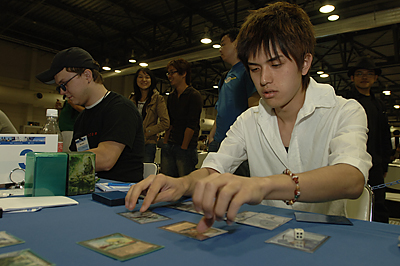 Things slowed down for a bit after that, as each player developed his position. When Tsumura-san had his sixth land, his first morph came in. Unblocked, it turned into a one-shot 6 points of damage from Slipstream Serpent. Kitamaya took further damage when he aimed an Orcish Cannonade at Kenji's other face-down, only to see it transform into Fathom Seer. This play earned Kenji major card advantage with a direct damage kicker. Following that beating, Kitamaya could only delay the inevitable. Finally, after a flurry of removal spells from both sides and with Kitamaya at very low life, Kenji made his grand play. A Pit Keeper brought back the dead Coral Trickster. The Merfolk was cast face down and immediately turned up to suppress Kitamaya's lone defender. With no blockers, Kenji's creatures swarmed in for the kill.

If Kenji Tsumura wins his final round, he will lock himself into the Top 8 and play on Sunday for Pro Tour - Kobe.