Round 14: Tuomo Nieminen (Finland) vs. Frank Karsten (The Netherlands) 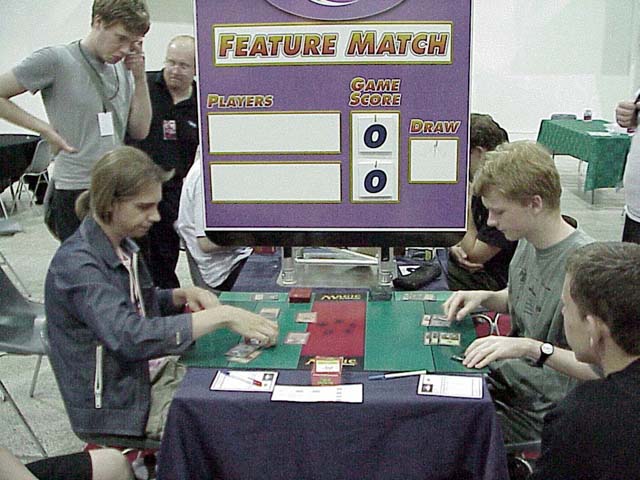 You can imagine how hard it is to play thirteen rounds of solid Magic only to find everything resting in your final match. Frank walked up to the table still with a mathematical chance of making the magic Top 8. He knows that feeling very well: he finished in the worst possible spot last year, the cursed ninth.

Tuomo Nieminen is a very good Finnish player that stormed through the Masters Gateway in Barcelona before succumbing to Superman itself - Ben Rubin - in a two and a half hour long marathon that I had the opportunity to cover.

Apparently I was more nervous than them since I had to change laptops twice, due to low battery, and despite the precious help of all-around nice guy Roel Dols had to settle down for good old pen and paper for this round.

Tuomo played first and opened up with a Tundra Kavu followed by a Bloodfire Dwarf. Karsten first play came a bit later but was much scarier: Mirrorwood Treefolk, also known as the Big Headache.

He followed that up with a Kavu Climber. While those two looked like an impressive tandem Tuomo was not about to let them roam free: they were the perfect targets for a devastating Dead Ringers.

Karsten didn't have any more creatures to play so for a while Nieminen became the sole owner and ruler of the Red Zone. He gleefully (well as gleefully as the quiet Finn can) dropped a Blue Battlemage and started swinging. The Dutchman finally found a creature, although it wasn't really scary, in the shape of a Thornscape Familiar and also drop a Necra Sanctuary.

Still, Tuomo was not about to let him back into the game. He blew up a Bloodfire Dwarf to get rid of the Familiar, sending everyone else into the undefended Red Zone and dropping a 3/3 Goham Djinn.

Frank knew he had to deal with that and he took the opportunity. The Finnish player was tapped out so Karsten killed his own Sanctuary with a kicked Orim's Thunder to take out the Djinn before it could be regenerated. What he couldn't do was find a decent blocker. His next attempt was a pitiful Quirion Explorer.

The incoming horde ignored the measly speed bump, leaving Karsten at four, and Tuomo even added a Nightscape Familiar and a second Tundra Kavu to the mix. Frank struggled out of the mana flood for a brief moment playing a Razorfoot and an Aurora Griffin.

Smelling the blood on the water an Annihilate killed the Razorfoot making way for a devastating swing. Karsten drew, shrugged and conceded.

As they shuffled up for game two they explained the situation at stake in this match to some of the spectators.

Tuomo: "I'm playing for something like twelve or thirteen. He might just make it with the win."
Frank: "It is tough but I might. I would probably just finish in ninth like last year. Well, first I have to win."

They finished sideboarding and the maddening shuffling and Frank kicked things of with his trademark line "Have fun". Tuomo opened with a third turn Tundra Kavu as an introduction for a Lava Zombie. Well, at least that was the plan but Frank had a stack trick using Consume Strength to get rid of the Kavu and bounced the Zombie back. 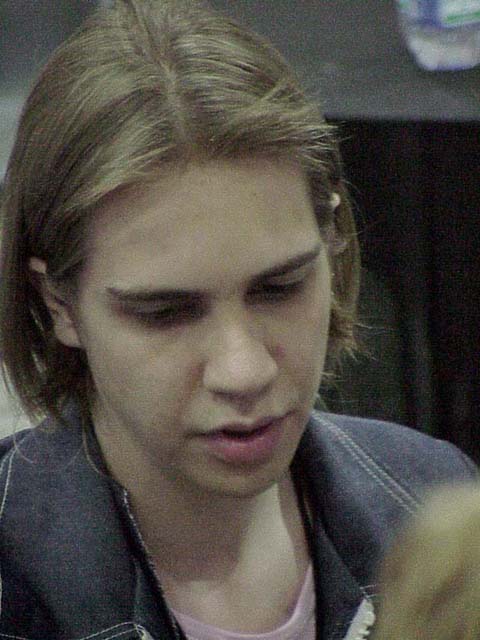 He then dropped a Mirrorwood Treefolk and watched an Urborg Skeleton allow the pump Zombie to stay in play. The Treefolk was unimpressed by that and sauntered into the Red Zone.

The Zombie didn't get a lot of chances to attack. In a few turns Karsten locked him up with a Manacles of Decay. Tuomo played out a live blocker for the Mirrorwood Treefolk, a 2/3 Emblazoned Golem.

With no Red Mana available to activate his Treefolk Karsten was forced to sit back. Tuomo didn't give him time to find Red mana: he Annihilated the Mirrorwood Treefolk. Again the Finnish had free reign to attack, especially with a fresh Goham Djinn.

That was exactly what everyone thought, but Frank had very different ideas. He used the white half of an Order/Chaos to get rid of the Golem on a permanent basis and played a second Mirrorwood Treefolk.

On the next turn he ripped Tuomo's hand apart with a kicked Hypnotic Cloud (grabbing Dead Ringers and a Stormscape Battlemage). Nieminen did what good players do best: he just topdecked a Bloodfire Kavu.

He played it hoping to finish Karsten blocking duo of Treefolk and Kavu Climber. When he decided to use it in combat it led to a rules doubt that involved a couple of judges. When the mix up got cleared Frank saved his Climber with a Gaea's Might. That attack Tuomo dropped Karsten to nine while being at eight.

Frank played a Helionaut and a Razorfoot Griffin and started hitting Tuomo back with them while locking up the ground. The flyers kept nibbling away while the Finnish player silently got desperate.

To make matter worst Frank Karsten went into little kid mode playing out a behemoth we all know as Draco, drawing a lot of amusing comments from the crowd.

That obviously sealed the game as Tuomo couldn't handle any of the three flyers.

With just fifteen minutes left they smoked through the shuffling and got the decisive game underway. At the start they looked very happy with their hands but it soon became apparent that they were in big trouble.

Tuomo played two Mountains and Karsten matched him with two Plains before they laughingly went into discard mode. Tuomo was the first one to break out of that mantra with a third mountain that allowed him to play out his Tundra Kavu and a Bloodfire Dwarf.

That spelled trouble for the Dutch. He dropped a Manacles of Decay in the Kavu trying to slow the Finnish down but the next creature was even bigger: a 4/3 Mire Kavu. Frank finally drew a Forest and played out a Mirrorwood Treefolk. 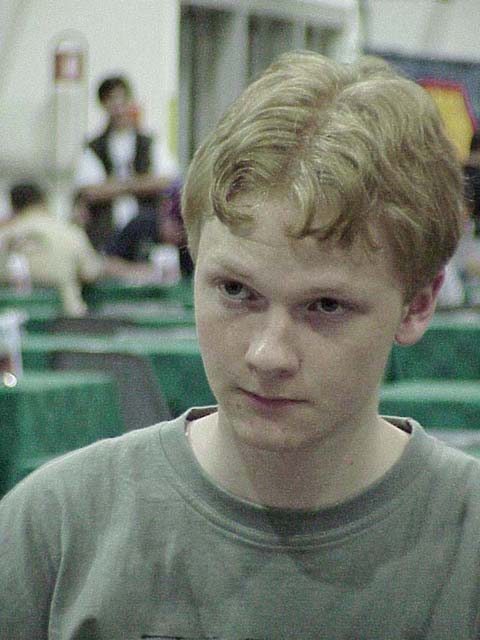 As usual the silent Tuomo was ready for it, this time with an Annihilate. It seems Karsten is really in to Mirrorwood Treefolk because he immediately dropped another one.

The Red horde didn't even blink and everyone attacked bringing Karsten down to fourteen. If there is really no rest for the wicked Frank Karsten must be a really bad person because the cruel Nieminen poured creature after creature into the Red Zone. Frank struggled to keep up but Tuomo even had an unkicked Jilt for his late Penumbra Kavu.

In the end he was locked into deck slamming mode but to no avail. He used a Primal Growth and passed the turn pretending to have a Tangle but nothing could stop the Finnish crowd. Frank smiled and extended his hand.