By by Marc Calderaro

As always with these bubbles matches, the only pre-game chatter is that of tiebreakers and intentional draws. Tim Aten and Carl Dillahay have both come this far, and neither wants to end up ninth. They do some in-head counting, and then present their decks. 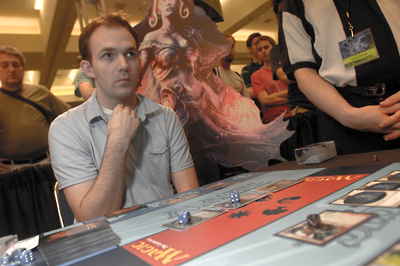 Carl Dillahay has made it here all the way from the Grinders.Dual Figure of Destinies started the round, though Tim Aten, going first, used a Plains while Carl Dillahay tapped a Mountain. Tim thought long and hard before laying a Windbrisk Heights revealing – Land, Land, Sunlance, Knight of Meadowgrain. He chose to put the Knight in the hiding spot, and the Figure went 2/2 and got in there. Its newfound stature was short-lived; Tarfire (one of Dillahay's 18 burn spells) took it out leaving Dillahay's Figure of Destiny as the new Avatar in town. Grove of the Burnwillows kept Aten's life a little higher, and after summoning a Knight of Meadowgrain and a third Figure, Aten passed the turn up a point (18-19).

A 4/4 Figure attacked into Aten's Meadowgrain and Dillahay followed with a Tarmgoyf powered out, in part, by a new Mutavault. With Aten's Spectral Precession, the board became a 2/2 Figure and 3 1/1 Fliers against a 3/4 Tarmogoyf and a 4/4 Figure. Who knew aggro powers and toughnesses would be so complex? Dillahay swung in with all three creatures (counting the Mutavault), and Aten paused only for a second before taking it all, making the totals 16-10 in Dillahay's favor. But could the free Knight coming out help Aten Lifegain back on track? Evidently it did, as did the other one cast from his hand. It was 11-10 when Dillahay drew for his turn, and he held a Mountain, two Rift Bolt, Flame Javelin and a Shard Volley in his grip. The 4/5 ‘Goyf was chumped by a Knight (bringing Aten to 12), then both Rift Bolts entered the RFG zone with one time counter.

The beauty of aggro-on-aggro matchups is the intense red-zone calculations that just don't seem too happen that often with control. When Aten turned everything (including a Mutavault) sideways, Dillahay went into the thinktank for close to a full minute before simply putting his 4/4 Destiny Figure in front of the ‘vault. Aten flashed a Thisteldown Duo, but Shard Volley made short work of it. It appeared the burn spells gave Dillahay a severe edge in the matchup.

With all this gaining and losing, Dillahay ended at 4, and after the Rift Bolts unsuspended, Aten went into single digits himself, but a significantly higher: 9. Dillahay was just about there, summoning a Kavu Predator and holding his Flame Javelin, but since his third land was a Grove of the Burnwillows, Aten gaine one, remaining alive. Tricky, tricky.

Aten attacked Dillahay down to one with his flyers, and Dillahay's draw step offered little recompence. He sighed, scooped, and quickly sideboarded in three Firespouts.

Aten painstakingly sided out a fair amount of cards, including a Stalwart for his anti-aggro package. Aven Riftwatcher and Sunlance were among the bunch.

After presenting their decks, the two were ready for another go.

Tarmogoyf, Keldon Marauders, Firespout and Incinerate were good enough for Dillahay, though Aten went to Mulligan Hills before keeping his six.

Marauders matched against Meadowgrain Knight, but a freshly drawn Tarfire cleared the way for Keldon to deal the full five. Dillahay followed with a Kavu Predator. Aten tapped out for his Spectral Precession, but at 15 life, and a Predator/Burnwillows combo in play, Aten was on the backfoot, and Dillahay's Tarmgoyf just added insult to injury. But Aten's hand held a Thistledown Liege, Aven Riftwatcher, Knight of Meadowgrain and a Wizened Cenn. The Riftwatcher should win back precious time. Or so Aten thought. 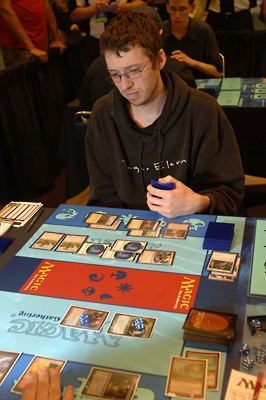 Tim Aten does not seem happy about Carl Dillahay's Firespout.Remember the ace in the hole in Dillahay's opening hand? Yeah, me too. I believe Aten summed it up the best: "Your deck has Firespouts in it?! Jeez, what did I do to deserve this?" It didn't even take a draw step for Aten to scoop them up. An ever-growing Kavu Predator and an over-three-toughness ‘Goyf were just too threatening. Tim needed to side some Mana Tithes for that powerhouse.

So it all comes down to this.

Aten had the big advantage of going first, but would he find the answer to an impending Firespout? He kept his opening: Stalwart, 2x Meadowgrain, Mana Tithe. Hopefully he'd be able to Tithe the Firespout that Dillahay's opening hand did in fact contain.

Aten's Stalwart weathered a Tarfire thanks to the Rustic Clachan, (Dillahay waited in hopes of blowing out the inevitable Wizened Cenn turn two, but Aten was smarter than that) and Aten followed Dillahay's Keldon Marauders with the Wizened Cenn Dillahay was waiting for. It was quickly 14-16 in Aten's favor. Dillahay saw the opening for a game-altering Firespout, but he didn't read the Mana Tithe and walked right into it. When the Marauders bit the dusk, it was Aten's Cenn, Stalwart and a new Meadowgrain left standing with Dillahay's board surprisingly lonely. Dillahay filtered some mana and Tarfired and Incinerateed a couple guys, but the 3/3 Stalwart and a Mutavault were able to get in next turn, knocking Dillahay to a precarious three life.

Does he have a save? Passing the turn with three mana up says, well, it says "Maybe." Aten sent in the two Kithkin (a Kithkin and a faux-Kithkin to be precise) and Dillahay reprised his last turn with another chorus of Incinerates and Tarfires ("That was supposed to be your face," Dillahay taunted).

The underdog, grinder-winning Dillahay gained a surge of strength when he refilled the board with a Predator (sans Burnwillows) and a Figure of Destiny, then matched Aten's Wizened Cenn with a 5/6 Tarmogoyf. But could he get in the 15 damage before Aten could deal the final 3? Dillahay did have three cards in his hand, and did his darndest to finish Aten off. He started the damage party with an attack that dropped Aten to 11. After his draw, Aten only shrugged and shipped the turn back.

When all three beaters came ran in Aten's direction, Aten hoped his now Reinforced Cenn could take out the Predator and keep him in the game. But the unblocked damage just brought him too low. Dillahay just flashed two burn spells and that was all she wrote.

18 burn spells and 20 creatures was just the right mix to get grinder-worn Carl Dillahay into the Top 8.