asashi Oiso and his opponent each came into this round fighting for Top 8 here in Yokohama. Oiso has been away from the game for a little while to concentrate on his schooling but has experience of the Sunday spotlight already. His opponent, José Luis Echeverria Paredes of Chile, is the only one from his country here this weekend and is pushing for his first final day. 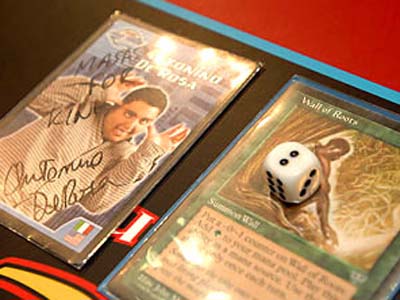 Antonino cracks jokes at feature matches he isn't even there for.

Oiso had the first plays of the match, having won the roll, in spite of a mulligan. A Wall of Roots enabled Search for Tomorrow to be suspended and then accelerated a Call of the Herd, which created a 3/3 Elephant token, represented by an Antonino De Rosa Pro Player card proudly declaring "Masashi for King."

Beyond some Prismatic Lenses, José's first play was a Shadowmage Infiltrator, which was soon hit by Disintegrate, such that Jonny Magic couldn't slow the Japanese beatdown. Teferi did succeed in killing off the elephant, but it was soon replaced by Spectral Force—a creature far too big for Teferi to be able to trouble.

The 8/8 rumbled over to take José down to 9, and a Search for Tomorrow further built up Masashi's mana base and allowed for a flashed back Call of the Herd. Antonino was back, and he sat in third place for being the biggest creature on the board.

At the end of turn, Mystical Teachings found the Chilean a Snapback, which would likely deal with another Elephant. In fact, Tendrils of Corruption was the spell to deal with the pachyderm and take José back up to 13.

Meanwhile, Teferi was beating up Masashi with those clubs of his. Three sets of swings had Oiso down to 11—an amount that he almost hoped to be able to meet back in a single swing from Spectral Force and an Assembly-Worker token from Urza's Factory. The Force was hit by Snapback, and then by Dismal Failure, allowing José to stay ahead in the damage race though.

The following turn, when Oiso tried for Bogardan Hellkite, he again met countermagic, this time in the form of Cancel. Still more Teferi raged in. At the end of an uneventful turn for Masashi, José went with Mystical Teachings to find Body Double, who had been given flash thanks to the blue legend who had been both slicing and dicing all game.

When Teferi attacked again, he was blocked by Wall of Roots, which used its remaining counter to power out another Assembly Worker. This rather paled in comparison to Body Double, which became a Bogardan Hellkite and destroyed Oiso's board—and eventually Oiso himself.

For Game 2, Oiso was very much in control of the tempo of things, with a turn-two Prismatic Lens accelerating a Mwonvuli Acid Moss on his opponent's Island, which in turn allowed for a Spectral Force the turn after. Damnation (accelerated by a storage land) put paid to this first threat, but Oiso was quick to reload with Harmonize, then a Wall of Roots. 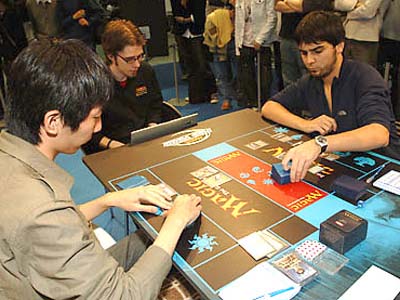 José had a Plague Sliver, looking to take the beatdown path, but was trumped by Spectral Force. This was considerably more of a clock on the board, especially with the new Juzam's help from pain and simply being a black permanent. Serrated Arrows further complicated things for the Chilean player, who played a land and passed his turn. He took the full 8 from Spectral Force but won back 5 of it with a Tendrils of Corruption to kill Wall of Roots.

When Plague Sliver cracked back, it did so as just a 4/4 thanks to Serrated Arrows, and Oiso took his first beats of the game. Spectral Force then repaid the favour, by a factor of two, before Masashi played a Wall of Roots.

At the end of turn José used Mystical Teachings in order to find Snapback, before immediately playing it to bounce the 8/8 trampler, holding it off for a turn. Plague Sliver couldn't get past Wall of Roots, and Avalanche Riders from Masashi both destroyed an island and served as another attacker. Oiso was hesitant to replay his Spectral Force, perhaps sensing a counterspell from his opponent. José did have one play for Oiso's turn, in the form of Tendrils of Corruption. This won back a lot of tempo in the game, killing the irksome Wall of Roots, allowing Plague Sliver to attack, and gaining 5 more life. Plague Sliver attacking forced another Serrated Arrows activation, which in turn made playing a morph that much safer.

Finally, on Masashi's turn, he tried for his Spectral Force, only to run into a Cancel. The tide of the game seemed to be turning. José attacked Masashi to 8, and was on just 5 himself thanks to Plague Sliver damage. In a tight race, Oiso tried to pull ahead with Harmonize, but passed without a play. When José tried for Teferi, Masashi responded with Bogardan Hellkite, for the final 5 points.

For the final game, José wished his opponent luck and kept his opening 7. Oiso was not so fortunate, and had to mulligan once. José was on the play for the first time in the match and led with a quick Shadowmage Infiltrator, who got to beat in unimpeded. Oiso's first play was Mwonvuli Acid Moss on one of his opponent's Islands, leaving the Chilean with Island, Dreadship Reef and Terramorphic Expanse. Between the Acid-Moss and Search for Tomorrow, Oiso quickly got up to six lands in play but was well behind on cards in hand as Jonny Magic drew José many extra cards and Think Twice did the same. 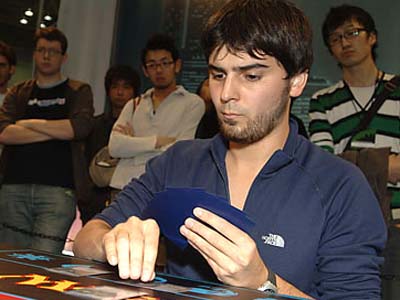 The Acid-Moss plan continued. Cards in hand could be of limited use while José's mana was restricted, and this is what Oiso endeavoured to do, though he faced an uphill battle in the face of extra mana producers such as Prismatic Lens coming from the Chilean.

Eventually Oiso used Disintegrate to kill Shadowmage Infiltrator, but was stopped from reloading with Harmonize by a Cancel. Another Acid-Moss hit another Cancel. Each player would soon have to move on to different spells, as they were starting to run out of copies of the ones they had been playing in the early game.

José went with Plague Sliver. For Oiso it was Avalanche Riders, who again attacked José's blue sources. Plague Sliver simply attacked Masashi, and did a good job of it, keeping José well ahead in the damage race. It was joined by a morph. Masashi simply passed his turn, with José using Mystical Teachings in his end step to find Snapback.

When José attacked and flipped up Brine Elemental, that was enough to end the game.