These two are kickin’ it old school. Helmut Summersberger is eligible for the 2008 Magic Hall of Fame, which means his professional debut was in 1999. Similarly, 2007 Hall of Fame inductee Zvi Mowshowtiz’s first (non-Junior) Pro Tour was Los Angeles in 1998. 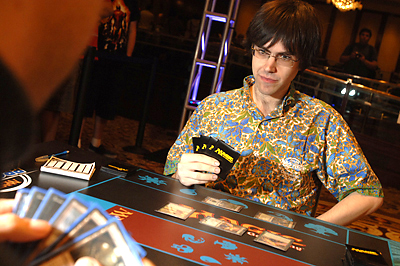 The gaze of Hall of Famer Zvi Mowshowitz is intense to say the least.Zvi received a mid die roll phone call from a friend. “I’m in the feature match area. I’ll call you back, okay?” Hopefully whoever it was knew what that meant.

The call may have been lucky, as Zvi won the roll and kept the first hand his midrange red-green deck offered, while Summersberger sent his Faeries back in search of higher-quality sprites. He kept his six reluctantly.

A Forest from Zvi was trumped by Secluded Glen revealing Bitterblossom to suspend Ancestral Vision. Summersberger’s mulligan was looking to be just what the doctor ordered.

“Long day,” Zvi quipped as he played a second Forest and a timely Llanowar Elves. “I’m just bitter. Well, not as bitter as you, I guess.”

The referenced Bitterblossom came into play with the help of River of Tears and the action was back on Zvi, who played a Fire-Lit Thicket and Magus of the Moon before getting a free point in with his Llanowar Elves.

“Mountain,” deadpanned Summersberger, placing a River of Tears on the table.

“Mountain it is,” Zvi replied. Magus of the Moon came across the red zone, taking Summersberger to 16. A Forest gave Zvi enough mana to drop his first Deus of Calamity, sending the turn back to his opponent with a goodbye wave and grin.

A second token knocked Summersberger to15, but his deck wasn’t cooperating, and he was forced to let Zvi’s army prepare for battle.

Mowshowitz played a Mountain before attacking with Magus of the Moon, Deus of Calamity, and the Llanowar Elves. One token blocked the Elf, and the other blocked Deus. A Tarfire on the token meant the Deus was loose, and it trampled in for the full 6. The 2 damage from the Magus meant Helmut was on 7 and down a Secluded Glen.

No answer came from Summersberger’s deck, and he scooped up his few permanents.

“You’re playing first, right?” Zvi asked. When his opponent laughed, he followed with, “Just making sure.”

Summersberger laughed as he looked at his first seven.

“There’s something missing from that hand,” Zvi guessed before Helmut showed 2 Mutavaults and a Pendelhaven before shuffling them back in.

Summersberger kept his six-card hand and led with a Mutavault, while Zvi’s turn was a Forest and Birds of Paradise.

A Swamp helped send the man-land across for some early damage, and Zvi answered back with a Treetop Village, a second Birds of Paradise and a Llanowar Elves.

A second Mutavault for Summersberger turned on the first, sending it across for 2 more. “More good beats!” Zvi said, happy that his opponent was not developing his board. He threw down the second Deus of the match before giving the go-ahead with a smirk.

“I didn’t like his chances, to be honest,” Zvi shrugged as his opponent passed the turn without attacking.

Magus of the Moon was met by an opposing shrug. Llanowar Elves poked Summersberger down to 19. 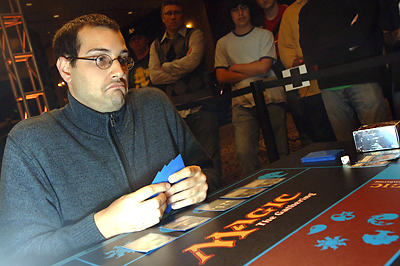 Helmut Summersberger shrugs and soldiers on.A third Mutavault was all Summersberger could muster. Magus number two arrived for Zvi, and both players shrugged. The first Magus and the Llanowar Elves came across, but Terror killed the 2/2.

Helmut’s turn was again unimpressive: Swamp, go. Zvi played a Karplusan Forest (Karplusan Mountain for now) before attacking with his Magus and Llanowar Elves. A Countryside Crusher ended the turn.

With no Damnation sitting on top of his library, Helmut offered the hand.