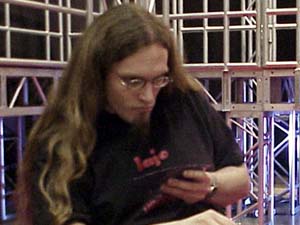 only two rounds left to go for all but eight players, both Gabriel and Hans were fighting for the chance to play on Sunday. Gabriel only needed one win over the final rounds while Hans needed them both--and could still miss on his tiebreakers.

Gabriel was piloting the TwelvePost deck that he designed while Hans was running Atog Affinity.

Hans kept his hand and so did Gabriel. Hans led off with Vault of the Whispers and Disciple of the Vault. Gabriel played a Forest and Oxidized the land--he took one from the Disciple.

Hans attacked for one the hard way with the Disciple and then played another Vault and a Skullclamp. Gabriel played a second forest and passed the turn. He fell to seventeen on the next attack. Hans played an unimprinted Mox and a Seat of the Synod to power out Thoughtcast. He then equipped his Disciple and drew two more.

Gabriel played a Stalking Stones and cast Viridian Shaman. Hans went to put his Skullclamp in the graveyard but Nassif told him to hold on. He chose to kill a Seat of the Synod instead. Hans untapped and played another Disciple and a Seat of the Synod. He promptly traded in the critter for two more cards.

"Bam," announced Nassif as his Shaman banged in for two points of damage. He followed it with a Solemn Simulacrum. Hoeh played a Great Furnace and cast a one mana Somber Hoverguard.

Gabriel bashed for four and played a Mindslaver on his turn. Hoeh sacrificed his Mox to Shrapnel Blast his foe EOT. Hoeh was holding another Shrapnel Blast and did not want to have Gabriel deciding where any of them would be aimed.

He played a Glimmervoid on his next turn and cast a Pyrite Spellbomb. He shot Gabriel down to ten with it and attacked him to seven. Gabriel fell to two when he sacrificed his Skullclamp to Shrapnel Blast the Frenchman.

Gabriel attacked for four and activated Mindslaver. He got to see a hand of three artifact lands and a Skullclamp. Gabriel/Hans played the Skullclamp and considered equipping the Hoverguard to run it into his Blinkmoth. He could not bring himself to give Hans two cards and merely attacked the Hoverguard into his land. Gabriel no extra mana available after activating the Blinkmoth and could not pump the Blinkmoth to a 2/2. He had not realized this immediately and was embarrassed by his misplay.

He had no answer for the flier on his next turn and lost the game much to his chagrin.

Hoeh breathed a sigh of relief at his unexpected good fortune, "You are playing Type 1?"

"You can do that with Mishra. This one needs another mana. Don't worry you don't need this match win as much as I do anyway."

"That was pretty bad. You had complete control and all the information."

Gabriel flashed his sly smile that did not completely jibe with his response, "I will feel really bad if I end up winning this match."

Nassif's first turn Forest allowed him to smoke a Skullclamp from Hoeh EOT. He could not take out the indestructible Darksteel Citadel. He used Sylvan Scrying to fetch a Cloudpost and passed the turn. Hoeh played a Disciple of the Vault off of a Glimmervoid. Gabriel played his Cloudpost and sent it back to Hoeh and took one from an onrushing Disciple. Hoeh cast Thirst for Knowledge in his main phase and could not decide what to discard. Nassif urged him on, "There has to be one worst artifact, it can't be that close."

Gabriel was startled when Hoeh pitched Echoing Ruin and another Thirst for Knowledge. He used an Oxidize EOT to smoke Seat of the Synod and played a Solemn Simulacrum on his own turn.

Hoeh played a Skullclamp and spent two to Thoughtcast. Gabriel had no play and passed the turn with six mana and the Simulacrum. Hoeh had a Furnace and paid two for a Hoverguard and two more for a second one. At the end of Hoeh's turn Gabriel Oxidized the Skullclamp and fell to seventeen from the Disciple.

He played another copy of Jens Thoren's invitational card and attacked for two with the first. He fell to eleven on the attack from the two fliers and Hoeh played a second Disciple with four artifacts in play. He all but sealed the game when he dropped an Atog.

Gabriel was not ready to give in just yet though and calmly played a land and flipped up a Tooth and Nail with the mana to entwine it. He fetched and put into play Leonin Abunas and Platinum Angel. Hoeh looked crestfallen while the French spectators cheered on their hero. Gabriel attacked with both of the 2/2s and Hoeh ate one with his Tog and fell to sixteen.

Hoeh played a Skullclamp and equipped one of his fliers and attacked with it. Gabriel had no blocks. Hoeh moved the Clamp to his Disciple and drew two cards. He played a Frogmite and equipped it. It was fed to the Atog for two more cards and Gabriel fell to two. He moved the clamp to his other flier and passed the turn.

Nassif played a Viridian Shaman and aimed it at the Skullclamp. Hoeh sacrificed it and Gabriel went to one. He checked to make sure it was safe to send in his Angel and attacked. Hoeh had no play but Gabriel had to laugh as he played and activated his Mindslaver on his next turn, "Your turn."

Hoeh sacrificed all of his lands EOT and allowed Nassif to take his turn. His hand after the draw was Aether Spellbomb, Disciple, Chrome Mox and Glimmervoid. He played the Mox imprinting the Disciple. He used the Mox to play Aether Spellbomb. He ran the Hoverguard and Disciple into his own creatures. He bounced the other Hoverguard and ate the Mox. He left Hoeh with only an Atog on the board and a Hoverguard in hand.

Gabriel showed him the other Mindslaver in hand and they moved onto Game 3 with less than fifteen minutes in the round.

Hoeh led off with a Disciple while Nassif played a Cloudpost. Hoeh imprinted a Shrapnel Blast on a Chrome Mox and cast Thirst for Knowledge pitching a Frogmite. Gabriel had another Cloudpost and a Scrying in hand but had to Oxidize the Seat of the Synod.

Hoeh tapped out to cast Thoughtcast off of a Glimmervoid and attacked for one. Nassif played the second Locus and still had the mana to Shaman Hoeh's Vault of Whispers. Hoeh had no play on his turn. With one mana floating from a Cloudpost, Nassif searched out another one with his Sylvan Scrying. He mana burned for one and played the Locus.

Hoeh had an Atog and put it into play. Nassif played an Oblivion Stone but Hoeh was ready with Annul. Hoeh cast another Thirst for Knowledge on his own turn and his hand was almost at full capacity. Nassif was agonizing over his Game 1 misplay and fearful of losing or drawing this one.

Hoeh played a Vault of the Whispers and two Frogmites. He attacked with Atog and Nassif could not put his Shaman in the way fast enough. He had another Oblivion Stone and played and activated it. He used another Sylvan Scrying to find a Blinkmoth Nexus and passed the turn.

Hoeh dug for answers with Thoughtcast but had no play. With time about to be called Nassif played a Tooth and Nail for a Darksteel Colossus and a Viridian Shaman to take out one of Hoeh's lands. Hoeh used Shrapnel Blast to throw the targeted land at Nassif who fell to seven. 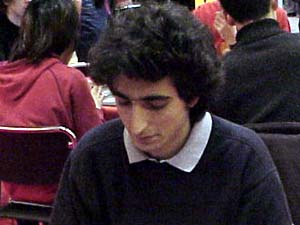 Time was called and Hoeh looked two cards deeper with another Thoughtcast. Nassif took the second of five turns and cast another Tooth and Nail with entwine. He put a Leonin Abunas and Platinum Angel into play and attacked for thirteen.

Hoeh was determined and cast Thirst for Knowledge but there was nothing for him to find and he conceded. Nassif was embarrassed, "I don't deserve to have won this match."