just one more round to go, both players come into this match looking for one win to get them into the coveted Top 8. For Osyp (11-2-1) a win here should lock him in for a Sunday appearance. For Ben (11-3) to make it takes a little more help, probably needing a win here plus at least a draw in the final round. Either way, there's an enormous amount on the line.

With that much at stake, this one didn't open the way Ben was hoping as he mulliganned both his first hand and then also his six-card start. At five cards he found a keeper, playing Tomb of Urami and Plagued Rusalka. 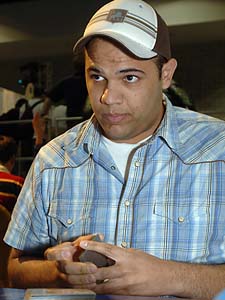 Osyp joked about the unusual cards Ben's innovative deck was sporting, then asked him a question: "So you know what I'm playing?"

Ben did what he could with his draw, which this game was precious little. He got stuck on two land and two little beaters while Osyp accelerated right to a Meloku. Ben winced, and Osyp pounced. "You're not going to like the next play either."

Osyp drew his card, then revealed that it was a Pyroclasm.

"Off the top, that's why they call him Osyp."

Osyp chuckled at that one, relaxed in the way you can only be relaxed playing for Top 8 with Meloku in play against a crippled opponent. "Is that why?"

Ben pulled up his next draw and quickly sent it off to Game 2.

During an extensive shuffling session, Osyp charmed the crowd with his banter and 19- year-old Ben Goodman effortlessly fired off a series of ancient Pro Tour references, giving as good as he got against one of the best. This time Ben shuffled his deck in piles of 8, after drawing comments before Game 1 for shuffling in piles of seven, which Osyp said looked like too much work. At piles of 8, Osyp pointed out that he was too old for something like that. "Come on, I'm 38." [He's not, of course.]

Eventually it was time for the opening hands, but Ben quickly sent his opener back. Looking surprisingly accepting with something like Top 8 on the line, he just smiled a bit. "It happens." This time he got to keep his hand of six.

This time it was Dark Confidant for Ben on turn two. Osyp had the Pyroclasm, but no red mana until his Izzet Signet was online. Dark Confidant revealed an Eiganjo Castle, which joined the table along with a Kami of Ancient Law, both of which went down in a fiery mess to the now-available Pyroclasm. Ben's follow-up was a second Kami of the Ancient Law, which Osyp pretended to be concerned about, joking that clearly it would have been another Confidant that would have been the more serious issue.

Osyp played the third piece of the Urzatron on turn four, and casually dropped out a Keiga, the Tide Star, looking very pleased with himself.

But then Ben played a Pillory of the Sleepless on it, which drew chuckles from the crowd. Osyp joked "nice draft deck!" 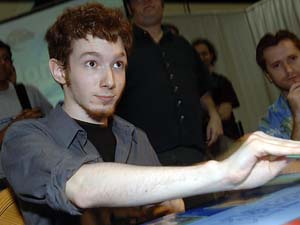 Ben excitedly starting untapping his permanents, but Osyp stopped him.

"I may do something about that spell, it's still on the stack."

Remand sent it back to hand and Osyp swung in for 5. Pillory came back down, but this time it stuck to the Dragon. Osyp pointed an Electrolyze at the Kami, asking if he'd like to sac it in response so Osyp wouldn't get the card off Electrolyze, gesturing toward the only enchantment on the table (Pillory). Ben declined with a laugh.

"What is this, your first day on the tour, kid? You got to sac that!"

Ben came back at lightning speed. "No, It's my second day on the Pro Tour." Ben held up two fingers too, just in case Osyp couldn't count, being so old and all.

Next on the draft table all-star's train was Thief of Hope. Osyp could only shake his head.

"What is that? Thief of Hope? Really?"

"You're not going to counter a Thief of Hope are you?"

But, he did end up using a Mana Leak to send the spirit to the graveyard. At this point the game stalled as both players went to the top of their decks looking for action to put the game away. Osyp had a second copy of Keiga in hand, but couldn't stop drawing more 'tron lands to go with it. Another Kami of Ancient Law came down, and then Osyp found his action.

Sitting on a monstrous 18 mana, Osyp started excitedly flipping the Blaze with the other cards in his hand. But then he stopped.

He thought a bit more, then decided to go for it, pointing an 18-mana Blaze at Ben's face. Ready for it, Ben dumped four cards on the table immediately. "Pitch these two cards to these two Shining Shoals, you take 8."

Osyp shook his head with a smile and suddenly both players were at four and five. Just like that we were at the end game. Ben untapped, drew his card, and sent the Kami in to drop Osyp to a precarious two - all the more precarious because Ben had a very threatening Tomb of Urami in play as well.

Osyp paused to gather his topdecking chi, and… ripped an Electrolyze. At this point he spent a long time thinking. (No, longer than that.) Whether he was fearing Shining Shoal number three, playing mind games that would make Mark Justice proud (or wince), or just trying to figure some other way out, Osyp spent several minutes on this one. Thinking done, he pointed Electrolyze at the Kami, which allowed him to rip a game-saving Meloku. Next he cast Keiga number two, stopping the Pillory bleeding. Finally, he dropped out Meloku with enough mana to make a blocker for the potential demon token.

Ben took it surprisingly well. "Did you draw the Meloku off the Electrolyze?"

Ben barely glanced at his next card, and offered the hand. Michael Flores jumped over to compliment Osyp. "Nice Electrolyze!"

"Oh man. I didn't tell him! I told him 'I didn't remember' because I didn't want him to know I topdecked the Meloku."

Ben smiled ruefully. "It's OK, I won't go to my mom and cry. Luck happens. How do you think I'm here?" 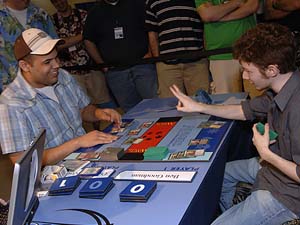 The youngster corrects Osyp…that's TWO days on the Pro Tour

At this point, Osyp began a serious celebration for making Top 8, the kind that comes with a dance and everything. "Two years! That's a long time! I am good!" Hearing the commotion, Randy came over to interview him, starting with "So, how do you feel?"

When it was all over, Randy also interviewed Ben, complimenting him on how well he'd played the verbal game with one of the game's masters.

Quick as a whip and with a smile to match, Ben had the answer: "I feel like Osyp is a luck sack."

That got a huge laugh, and Ben made it clear he was still in great spirits. "I think there's still a chance I could make Top 8, and even if not I can still make Top 16, which is a bunch of money and invites. I'm still happy."

It was a great match, both on and off the playmat. If Ben's deck continues to be as good as it looks this weekend, there will be a lot of other happy players as well, as such Limited stars as Thief of Hope, Strands of Undeath, and Pillory of the Sleepless get their moment in the tournament sun. See? Aaron told you Shining Shoal was good!