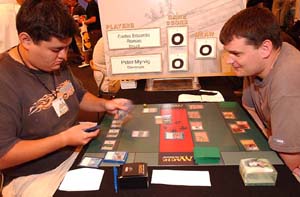 The cream is certainly rising to the top as we near the end of the individual swiss rounds. With just four rounds of play remaining, former World Champion Carlos Romao had to face Pro Tour – Houston Top 8er Peter Myrvig. Romao was with the much-hyped Mind's Desire, and Myrvig was with its nemesis Sligh.

Myrvig won the die roll, something that always makes a Goblin player smile, and led off with Raging Goblin. Romao played a Flooded Strand and accepted more beats before getting an island. Myrvig added a Goblin Piledriver. Romao played his second island and considered the Snap in his hand, but then played Sapphire Medallion. Myrvig made him pay with a second Raging Goblin, dropping Romao to just ten life. Wasteland and Seal of Fire further complicated Romao's plans.

He drew his card and sighed. He looked at a hand of Brainstorm, Snap, Mind's Desire, Sapphire Medallion, Cunning Wish, Merchant Scroll and Ancient Tomb. He thought hard before playing his Brainstorm. It turned up another Brainstorm, Flooded Strand, and Accumulated Knowledge. The Knowledge and Tomb headed back on top of his library. He played the Strand and fetched out an island. Myrvig looked thoroughly bored, but it was probably just the oppressive heat getting to him. The table was thronged with spectators. 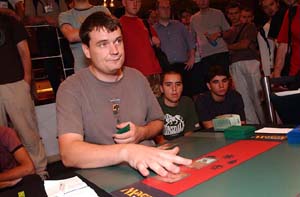 Romao deliberately tapped an island and laid Snap on the table, getting rid of one of the Raging Goblins. Then he Merchant Scrolled, and then Brainstormed in response, getting another Snap and looking at Ancient Tomb and Sapphire Medallion before putting them back. His Scroll got him a Frantic Search and he passed it back to Myrvig with one island up.

Myrvig tapped three and played Goblin Warchief, then thought and added his Raging Goblin and swung in. Romao Snapped the Warchief then Wished for a Stifle for the Piledriver's Ability. He fell to six. His back was against the wall. He untapped and drew. Accumulated Knowledge was waiting for him. He cast it for a blue and drew a Frantic search! With the City of Traitors in his hand, he was able to Search away two lands and play a Mind's Desire for three.

The cards came down: Intuition, Ancient Tomb, Mind's Desire. It was a coup. Romao Intuitioned three islands out of his deck and Desired for five more. This time, the spells were Intuition, Cloud of Faeries, Frantic Search and two lands. The second Intuition got him Accumulated Knowledges, and he Searched up another Search while ditching two lands. The Fairies gave him some extra mana, and he drew four and then Searched again. Two more Fairies gave him still more mana, and then he Merchant Scrolled up a Meditate. Cunning Wish got Turnabout, and he Meditated, Brainstormed, and finally had enough spells cast to fetch Brain Freeze and put all of Myrvig's library in the graveyard.

Myrvig untapped and looked at his hand: Lackey and Lava Dart. With one more Dart milled away and the Seal on board he could deal five, one short of killing Romao. The kicker? His deck was supposed to have a third Dart in it, but he couldn't find it the night before.

Myrvig had to send back his first two hands, staying on a grip of three mountains, Siege-Gang Commander and Mogg Flunkies. Far from excellent. Romao only had to go down to six. While Myrvig got his Flunkies into play, Romao Brainstormed and fetched an island with Flooded Strand, then Merchant Scrolled up a Frantic Search. Myrvig's Goblin Lackey was late to the party. Romao Brainstormed again to get another fetchland.

Finally Myrvig was free to swing, and a Raging Goblin made sure his Flunkies would get to attack. Romao did not use his Chain of Vapor, and was punished when Siege-Gang Commander entered play. Worse, Myrvig had a Wasteland to frustrate any potential Cities of Traitors. Romao played an Ancient Tomb and used his Chain of Vapor to send the Commander home. Unfortunately, his life total was dwindling. Myrvig Wasted the Tomb and swung in, bringing Romao low. Unable to deal with the horde of monsters, Romao succumbed. 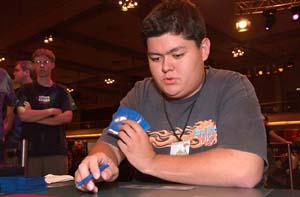 Just nine minutes remained for the decisive third game, which was good news for Myrvig's goblins. Better still, Romao mulliganed and Myrvig had a Lackey on the first turn. On the fourth turn Romao was facing some serious pain from a horde across the table. Lucky for him Mind's Desire can do some ridiculous things.

He started out with a small burst of spells, netting mana from Cloud of Faeries and Frantic Search. A couple spells later he was busting out a Mind's Desire for five. He didn't get the degenerate second Mind's Desire, but he did have a Frantic Search and a Snap, as well as a Brainstorm. He drew into a second Mind's Desire and fired it off, this time for twelve. The first card was Turnabout, signaling the end was very probably near, but then came the Tendrils of Agony, and it was over.