Round 15:
The Cascade Shopping Network

With around 30% of the field playing Jund, it's safe to say there's been a few Jund mirror matches played out this weekend. Anyone who was playing competitive Magic when Jund was a Standard deck knows what an intensive battle of resources it can be. It's quite likely that it might come down to which player is better at cascading.

Matthew Costa and Willy Edel have been playing near each other enough this weekend that they know what each other is playing, and they know what they're going to be in for. Both players are 11-3 with two rounds to go, so a loss for either of them would mean watching the Top 8 play without them tomorrow.

Matthew Costa and Willy Edel get settled in for a rousing game of cascade chronicles in this Jund mirror match.

After a mulligan to six, Costa was the first to attack. Removal spells flew left and right, but Edel was stuck on three land, and his life total was falling one bite at a time while Costa's was not. Things got serious for Edel when he was forced to take down a 6/7 Tarmogoyf with a Lightning Bolt and a Dismember, paying the back-alley bargain price of 4 life and a single mana, putting him at a low, low 3 life.

Edel finally found his fourth land and used it to buy the hot, new Bloodbraid Elf from Alara Reborn Inc! Bloodbraid Elf is a 3/2 Elf with haste, but call now and you'll get a free...

[bad voiceover]: "Dark Confidant! This wheeler and dealer comes with all of the advantages of a regular 2/1 creature, but will also tell you additional dreadful secrets every turn, at the low, low cost of sizeable chunks of your life!"

This looked dicey for Edel from his delicate position on 3 life, but Costa felt that letting the Confidant live would be even more dangerous, and attacked in, letting Edel trade his team for the last of Costa's.

Edel's Bloodbraid Elf comes with plenty of free goodies. Unfortunately, his life total was on a limited time offer.

With the board now clear, Edel was able to start attacking back with his Raging Ravine. He followed it up with a Kitchen Finks to bring him up to 5 life. Costa found a Terminate to take out the Ravine, and a Bloodbraid Elf was waiting on top of his deck, bringing with it a...

[bad voiceover]: "Kitchen Finks! Kitchen Finks is the ultimate in kitchen accessories with a lifetime replacement guarantee. If your Finks dies, we'll replace it, free of charge! (new product may appear smaller)"

Once again, creatures traded with creatures and removal spells flew from side to side, until the dust cleared and Costa was left with a Deathrite Shaman. Edel was unable to find a removal spell as the Shaman got stuck into the instants and sorceries in his graveyard, and they were soon off to game 2.

Edel began slowly again in game 2, playing a pair of Treetop Villages, while Costa's turn one Deathrite Shaman let him cast both a Tarmogoyf and a Thoughtseize on his second turn, discarding Edel's Batterskull. Edel took out the 'Goyf with an Abrupt Decay, and had to discard a Dark Confidant when Costa summoned Liliana of the Veil a turn later. Not to matter, Edel's fourth turn was the new 3/2 hasty Bloodbraid Elf from Alara Reborn Inc! Place your order now and you'll receive a free...

Edel's team started menacing Costa and his planeswalker, while he could only manage a second Deathrite Shaman. Costa's back was against the wall, until he found a 6/7 Tarmogoyf. Edel shrugged and attacked into it with his Bloodbraid Elf. Costa wondered what could possibly go wrong, and Edel showed him, it slices! it dices! From the creators of Bloodbraid Elf, Alara Reborn Inc, it's Bituminous Blast! But wait, there's more! If you buy now, not only does your Bituminous Blast deal 4 damage to target creature, but it comes with a bonus...

[bad voiceover]: "Kitchen Finks! The loveable Ouphe with the most charming smile, how can you ever stay mad at them?"

Costa summoned a Bloodbraid Elf of his own, today only, with a...

[bad voiceover]: "Dark Confidant! He'll tell you everything and more (please read fine print to see if Dark Confidant is right for you, and consult your health professional if life loss persists)." 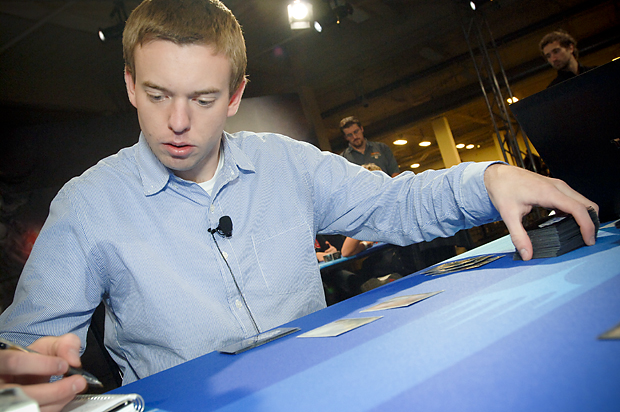 Costa had the cards, but he didn't have the time or life total to enjoy any expensive spells that his Dark Confidant could cough up.

Unfortunately for Costa, the life loss did persist, and he was forced to reach for his sideboard, where his health professional was assumed to be hiding.

After using Terminate on Costa's opening Tarmogoyf, Edel tapped out for a Thrun, the Last Troll. Costa had missed his third land drop the turn before, but tore a fetch land off the top, allowing him to summon Liliana of the Veil to take care of the Troll, before he could post anything inflammatory on Costa's life total pad, which was already a little tender, thanks to Costa's typical Modern mana base.

Edel bounced right back with a Bloodbraid Elf, brought to you by Alara Reborn Inc! The purveyors of fine multi-colored cards. If you call within the next 10 minutes, you'll get a complimentary...

Ignoring Liliana, Edel attacked Costa down to 11. Still low on land, Costa was in trouble. Edel was on 21 life and attacking, while Costa was frantically throwing removal spells at Edel's team.

Edel's Raging Ravine dropped Costa to a dangerously low 4 life, but a last minute Thragtusk brought him back up to 9. Edel summoned Dark Confidant, and Costa a Bloodbraid Elf! With a limited time offer available only to readers of Pro Tour Return to Ravnica coverage, a handy dandy...

[bad voiceover]: "Inquisition of Kozilek! The premier answer to your opponent's low-cost in-hand spells, such as oh, I see, Edel has no cards in hand."

Edel's Confidant found a second one, dropping him to 18. Costa played another Inquisition of Kozilek, and found Edel had drawn and was holding back a third Dark Confidant. He then Abrupt Decay'd one of the two in play. Edel's remaining Confidant flipped over an Abrupt Decay, and then another Bloodbraid Elf! we're just giving these away this weekend to our loyal readers, and yes! there's more, a free...

[bad voiceover]: "Kitchen Finks! Yes, they really do keep coming back this often."

The Bloodbraid Elves traded, leaving Costa with Thragtusk to Edel's Confidant and Finks. Costa traded his Village for the first half of the Finks, and summoned a Deathrite Shaman. Edel again plucked his Bituminous Blast off the top, and...

[bad voiceover]: "Really? We're still going to do this? Fine. It was a Tarmogoyf."

The Thragtusk bit the dust, and the resulting 3/3 Beast Token could not withstand Edel's monstrous 'Goyf, and Edel finally took the grindiest of grind-out matches to almost assure himself a spot in the Top 8.