Round 15:
Crawling Past the Finish Line

With a Top 8 berth on the line, it was the lowly Woodlot Crawler that allowed Makihito Mihara to hold off Hall of Famer Brian Kibler and his menagerie of green animals by the slimmest of margins.

"I was one damage short," Kibler said after the game, recounting a turn he could have attacked a large Lotleth Troll into Blood Baron of Vizkopa. "I had Abrupt Decay, and if you would have blocked him, you would have been at 1."

Instead, thanks to the early game brick wall that was the protection from green Woodlot Crawler, Mihara was able to survive long enough in Game 2 and Game 3 to resolve multiple Blood Baron of Vizkopas and ride the Orzhovian vampires to a come-from-behind victory. 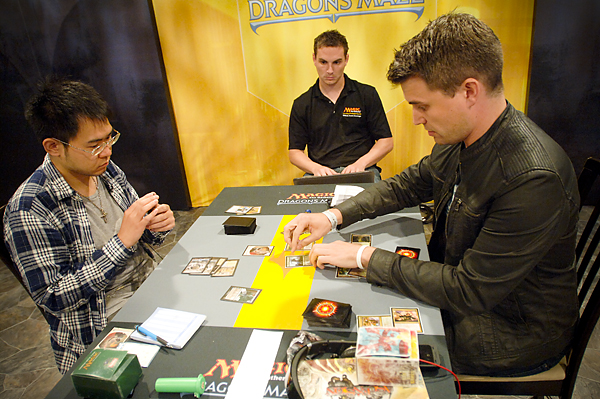 With both players at 11-3 with only two rounds left, the match was something of a win-and-in for Mihara, who had the best tiebreakers of the players on 33 points. Kibler's breakers were significantly worse, but he still needed this match for a Top 8.

The final match came down to Kibler going all in on a Lotleth Troll, using Varolz, the Scar-Striped's ability to make his Troll first a 9/9, then an 11/11 to get damage through a Blood Baron of Vizkopa. On one turn, Kibler could have attacked with his Golgari maze runner and giant Troll and if Mihara blocks Varolz—which by no means was guaranteed—Kibler could have cast Abrupt Decay on his own creature to prevent lifelink and win the game.

However, as it stood, even that sequence of events wouldn't do the trick. Instead, Mihara was able to use his Blood Baron and a Sphinx's Revelation for five to pull out of the hole he was in and land another Blood Baron and a Woodlot Crawler for good measure. 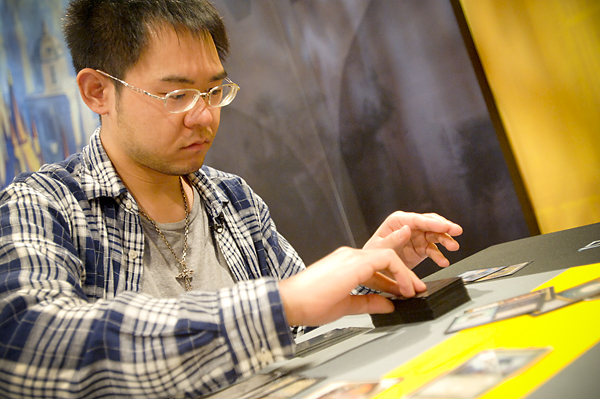 Mihara's Woodlot Crawlers bought him a ton of turns against Kibler's creatures, giving him enough time to win on the back of Blood Baron of Vizkopa.

Woodlot Crawler did a lot of the early work, and looked to be the difference between Kibler's fast, almost casual, win in Game 1. On the play for the first game, Kibler played Cartel Aristocrat into Dreg Mangler and just ran Mihara down. Even a fifth turn Blood Baron of Vizkopa wasn't enough when Kibler sacrificed the Mangler to give the Aristocrat protection from White, followed by scavenging to hit for the final five points.

Kibler looked like he was going to win the second game as well, but even after Mihara missed his fourth land for a turn, Woodlot Crawler was able to slow Kibler's attack to, well, a crawl, long enough for Ætherling to get in two giant attacks for the win. Kibler, unfortunately for him, fell two points short.

This isn't the first time these two longtime players have battled, and it wasn't even the biggest stakes the two veterans have fought over. 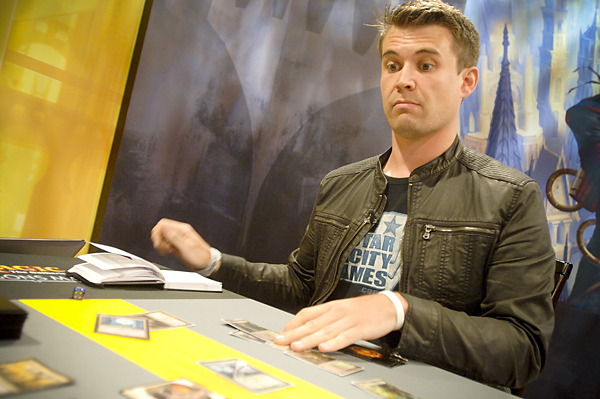 Hall of Famer Kibler tried to push ahead, and had an opportunity to close the game, but ultimate succumbed to Mihara's monsters.

"It was payback for Sendai," Kibler said, referring to Grand Prix Sendai in 2010, where Mihara fell to Kibler in the finals.

Match notes: Mihara's last Pro Tour Top 8 was at Hollywood in 2008, where he finished seventh. He does, however, have one Grand Prix Top 8 every year since that match with Kibler in Sendai in 2010. A Top 8 gives Mihara at least 279 lifetime Professional Points, up to 289 points if he wins. A Top 8 also guarantees Mihara Platinum for next season, giving him at least 46 points. A win in the final round would give Kibler a Top 16 finish and 59 Pro Points for the season.