into this final round of the day, Olivier Ruel is playing for Top 8 … yet again. He sat down in the top pod knowing that he was behind the rest of the players in the draft, and needed to win out to make it. So he proceeded to do exactly what Olivier Ruel does. He won a bunch. Now there is one last obstacle to yet another Top 8 for Olivier; Mr Shuhei Nakamura. If you are looking for an easy matchup for the final round of a Pro Tour, then this Japanese Pro is not a great choice. With Sunday appearances in Columbus and Worlds, Nakamura has shown himself, like so many of his countrymen, to be a force to be reckoned with at Magic: The Gathering.

"If I win out from here, I'm level 6 for 2007," commented a remarkably calm Olivier. He is used to this sort of position, and is clearly loving all the benefits of Level 6 status. That he could get there on the second stop of the tour just marks what a great season he is having.

Ruel kept his opening seven while Nakamura had to mulligan. The first play of the game was an Orzhov Signet from Nakamura, which got hit by a Repeal from Olivier. The Frenchman then followed up with a Master of Impediments and passed. 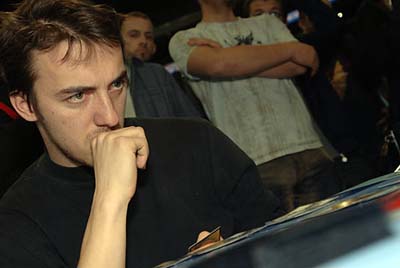 Shuhei ramped up to a Helium Squirter, but with just the one monster on the board, he was on the back foot against the Master of Impediments and the Cytoplast Root-Kin that joined it.

Not to be outdone on the rare count, Cerulean Sphinx came out for Shuhei. Olivier's response was a Vedalken Plotter to throw Nakamura off double black mana (in return for an Island) and a Terraformer, each with a counter from the Root-Kin.

Minister of Impediments proved a worthy adversary for Cerulean Sphinx, tapping him down and allowing only a 3-point swing from Nakamura in the air. Shuhei played a Pillory of the Sleepless on Cytoplast Root-Kin and passed.

With the Pillory down, Olivier was likely looking to fill the board with creatures to graft onto in order to stem any pain, and stared with an Enigma Eidolon. He then swung for five and passed. Olivier took three in the air, and Shuhei made Petrahydrox.

On his turn, Olivier used Master of Impediments to bounce Petrahydrox, and played Silhana Starfletcher to take the final counter from Cytoplast Root-Kin. The Petrahydrox came back, and brought with it a friend in the form of Ostiary Thrull, who Olivier rather didn't like the look of. At the end of the turn a Douse in Gloom took down the thrull to maintain French tapper superiority for the game.

The game at this point became draw-go for Olivier, who was rather on the back foot against the powerful monsters on the other side of the board. With one card in hand, he didn't use Master of Impediments on Cerulean Sphinx. Did he intend to use the master to bounce Petrahydrox? Was there a Gaze of the Gorgon coming, or simply a big strike back from Ruel? The life totals were 14 to 7 in Olivier's favour, and he thought long and hard about how to block. Silhana Starfletcher blocked Petrahydrox, and Olivier chose to leave it at that. Carom saved Petrahydrox for Shuhei but he had no trick to stop Ruel's return on the alpha strike, and the swings back were enough for the win.

Both players kept for Game 2, and Olivier had the first play of the game, on the draw, with an Izzet Signet. A Centaur Safeguard came out from Nakamura, and Ruel answered with Simic Ragworm.

The Ragworm could only trade with Shuhei's Safeguard, and when Nakamura played a Benevolent Ancestor, it looked that he wouldn't be much good on the attack. The trade looked better and better for Ruel, so he took it, and followed up with a Silhana Starfletcher. This would be good at blocking a flying Helium Squirter for Nakamura, and was also Olivier's only black source. He used it the following turn to play Shambling Shell, who was joined by a Terraformer. Shuhei, meanwhile, was content to get a monopoly on the air force, with Freewind Equenaut.

With Benevolent Ancestor on the board, Olivier couldn't feasibly push through much damage, but was taking fair amounts in the swings back. He made a block on Helium Squirter with some help from Shambling Shell, but was forced to Repeal the 3/3 when Nakamura had a Carom to spoil Olivier's original plan. The Shell got dredged the following turn, and played with some help from Terraformer on the lands, but a Pillory from Nakamura cleared the air to allow for the Equenaut to attack. The Pillory didn't stay around for long, as Nullmage Shepherd came to town, with enough creatures around to be of use. One of those creatures was a fresh Centaur Safeguard, who might help bolster a dwindling Ruel life total. He was at just 9 following air assaults, and slumped in his chair slightly as an Hour of Reckoning wiped the board, including all Olivier's access to black mana.

Shuhei followed up from his wrath effect the following turn with Cerulean Sphinx. Olivier had Master of Impediments. Shuhei had Ostiary Thrull. For Olivier though, a Swamp came at just the right time, as he used Rise to get back a Vedalken plotter to steal Nakamura's only Swamp, while bouncing his black creature.
Each player looked to build their board - Nakamura with a Swamp, the Thrull and a Beacon Hawk, Ruel with a Moroii and a Thrive to improve his men. In what looked to become a topdecking war, Nakamura pulled out the big guns in the form of Ocular Halo. Olivier tried to race with his Moroii, but ultimately it was for nothing, and he scooped it up.

Shuhei pulled one back, and it would be the final game for all the marbles.

Olivier had what appeared to be a slightly tricky hand for the third game, as after playing two lands he simply windmill slammed the top card of his deck into play, and luckily for him, it was an Izzet Signet. 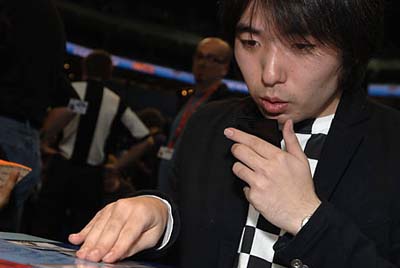 Nakamura struck back to win Game 2.

Nakamura struck back to win Game 2.

Slightly unluckily for him, his Silhana Starfletcher was quickly faced down by a Freewind Equenaut and Helium Squirter. Ruel had a Moroii to try to race or perhaps defend, but had those thoughts cruelly dashed by a Pillory of the Sleepless, which was a very big game from Nakamura, who continued to beat in with his flyers. Antoine had a Minister of Impediments to stop some of the beats, but there was little to halt the bleeding he was facing every upkeep.

Ruel went to 10 following another Squirter attack, and Nakamura followed up with Revenant Patriarch. He went to 8 in his upkeep, drew and started looking for an escape route from the whole world of trouble he was in. Shambling Shell and a Thrive to make Silhana Starfletcher a lethal-sized blocker meant that Shuhei's attack step was unspectacular, but his follow up play of Cerulean Sphinx was pretty good, and all the while Ruel was on a clock that looked unlikely to stop before Ruel did.

Shambling Shell ran at Nakamura, who was still on 20 and pondered what could be happening.

"Ninja!" pronounced Olivier with a smile. He got in 3 damage, then sacrificed the Shell to make Starfletcher bigger. Rise then saved Ruel from his own Moroii, and got the Shell back. On just 6 life though, he was still very much on the ropes.

Shuhei peeled the top card of his deck, and it was another Pillory for the Starfletcher, allowing the swing for the win.

Shuhei Nakamura wins 2-1, securing a spot in the Top 8!