Round 15: Dirk Baberowski vs. Armin Birner

Both players kept their starting hands. Armin, playing red/green, had a strong opening with Wellwisher and Timberwatch Elf. A third turn Wall of Deceit stopped the bleeding for some time, while Annex stole one of Armin's mountains. Would it only produce colorless mana, or may Dirk be able to use red mana, for a splashed removal or even an enchant creature? The blue/white mage went to the air with an Ascending Aven, while a Crested Craghorn got rid of the wall, meaning that dirk needed a new defense, which swiftly came with the aforementioned enchant creature: Lavamancer's Skills. "I've used it better in the past" said Dirk after playing it on a bird soldier to shoot the Crested Craghorn. 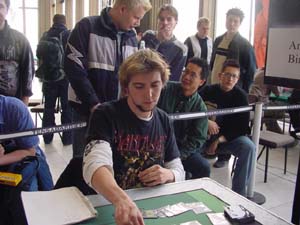 The skilled bird's life was over the next turn, when Armin played an explosion for 7 on it, putting a Bloodstoke Howler on bottom of his library. Mistform Dreamer and Keeneye Aven let the beating continue trough the air, while Symbiotic Wurm gave the elves some help. A morph, a Battlefield Medic and a Grassland Crusader joined the ranks of the blue/white mage's army in consecutive turns. Symbiotic Wurm went to the red zone, but died a horrible death to Grassland Crusader leaving the field with 4 insect tokens.

At the end of Dirk's next turn, Armin put an insect token into play at with vitality charm, and swung with 5 insects, which got all blocked. Tribal Unity? Of course. 4 soldiers went to the graveyard. The crowd sheered as their favorite came into play hit play next turn. The insects swung again, putting Dirk at 2 and Armin made a Krosan Groundshaker. Crowd Favorites stopped the Groundshaker, but every other of Armin's creatures charged, while he had played a face down creature before combat. Unable to block every creature, Dirk let 1 insect trough. If the face down creature was a Giant Growth effect or a direct damage, the game was over. Sure enough it was a Patron of the Wild. 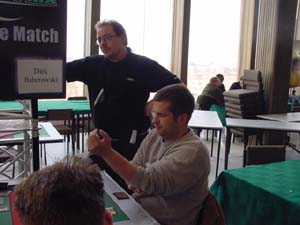 Dirk played first with a second turn Battlefield Medic and a third turn morph, while Armin cycled a Barkhide Mauler and had no third, nor fourth turn play, but a fifth turn Skirk Outrider. Dirk lost a morph to a Vitality Charmed Skirk Outrider and made a Grassland Crusader. Finally Symbiotic Beast hit play, and the tiny goblin grew to a 4/4 monster. Another Skirk Outrider and a Needleshot Gourna doubled Armin's forced, at the same time holding back the freshly cast Mistform Dreamer and Cloudreach Cavalry until Crowd Favorites hit the board, eventually tapping the Gourna and let the fliers trough for the next few turns.

But it was time for Armin to act, and after playing Stonewood Invoker and Barkhide Mauler, he swung with everything but his Needleshot Gourna, which got tapped. No big effect, Dirk lost a morph and Cavalry, Armin an Outrider and a Mauler. Dirk gave a dreamer the needed skills to kill an elf who could mutate into a 7/7 monster. Armin's Erratic Explosion, which revealed Timberwatch Elf, wasn't enough to get rid of the Dreamer, as Dirk could prevent 3 with Medic. Eventually he won trough the air.

Birner chose to start, while fortune wasn't on Baberowski's side, as he had to mulligan. Armin led the game with a Sparksmith, Timberwatch Elf and a Spitfire Handler.

" I can't beat this", said Dirk Baberowski as he packed his cards.