Round 15: Even the Pros Make Mistakes

into this round, there's a more on the line than "just" Worlds. Masashi Oiso is one of the front-runners in the Player of the Year race, and is the only leader also playing on a National team. And given that he's playing for Japan, that's likely to land a considerable number of extra points for his cause.

Standing in his way is Antoine Ruel. Antoine is also a potential winner in the race (albeit a very long shot), but would need a lot of things to go right to pull off first. However, you also have to take into account that his brother, Olivier, was at the top of the charts going into Worlds. With a lot on the line, there were plenty of eyes on this match between Magic superstars.

Just before they began, Olivier ran over and wished his brother luck. "You, good luck!" Then, pointing at his nemesis, "and you, boo!" Oiso smiled quietly and kept on shuffling.

Like many of the Japanese players, Oiso brought a blue-white Scepter deck splashing red, while the French player ran with blue-green madness with a splash of black, setting up a classic battle between heavy control and aggro-control. Ruel's deck will look to overpower his opponent through tempo and brute force, refueling cards along the way if the first wave isn't enough. Oiso just wants to stay alive, looking to make it to the very late game where his more pure control deck can dominate the resource war.

Like all battles of this type, the key is often in the first few turns as the aggro deck seeks to put the control player on his heels, and this one was no exception. Playing second, Ruel opened with Basking Rootwalla, but had his Wild Mongrel run into a Mana Leak. Mongrel No. 2 was also countered, but the extra mana meant a Pithing Needle on Scepter was able to slip into play.

Next turn a Mongrel made it into play, but Oiso was able to resolve Fact or Fiction. Oiso chose the small pile of Wrath of God plus a Mox, sending Cunning Wish, Island, and a Scepter to the graveyard. He wiped the board with Wrath, and Antoine had no creature for a follow-up, putting him dangerously behind if Oiso were able to keep drawing cards. A second Fact or Fiction from Oiso was countered on Ruel's turn, but that allowed Oiso to untap and resolve ForF No. 3, revealing five land. 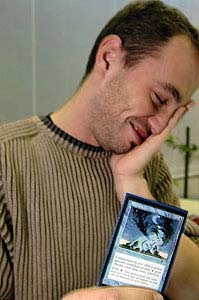 Antoine, you should know better!

Ruel's deck decided to put some offense out, giving him an Aquamoeba, which allowed a Circular Logic on Oiso's last business card of Sensei's Divining Top. Well, except for the fact that Oiso could just pay the mana to get through the Logic. Antoine looked embarrassed.

"I usually play 'Tog, I never have to check how many cards are in the graveyard!" Oiso smiled, but things weren't over yet when the Deep Analysis Ruel had begged his deck for showed up next turn. Between that and Oiso's Thirst for Knowledge off his Top, both players were back in business in this exciting and tense game.

Oiso got a facedown Exalted Angel into play, but Ruel powered out an Argothian Wurm off Careful Study, swinging in with the 'moeba again to drop his opponent to 9. Next Ruel had Careful Study No. 2, this time for the always saucy double Basking Rootwalla. Quiet Speculation was next, but Oiso stopped it with a Mana Leak.

Except that Ruel had three mana open, not the two Oiso had thought he had. This time it was Oiso's turn to look embarrassed. He, Ruel, and the crowd had a good laugh.

If that sounds sloppy for Pro-level play, it certainly is, but that's the kind of thing that can happen when you play at this level of competition for three days straight, and there are two more after this! I can tell you from experience that this much Magic is grueling, and playing it across different formats each day makes it tougher yet. Playing in a Pro Tour event is hard enough, but it takes a special breed to make it through an event like Worlds without committing significant mistakes. 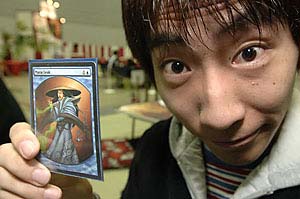 Don’t blame me, it has no text!

Both sides began racing, but the critical next turn saw Oiso avoid the deathblow by Wishing for Wing Shards, wiping out three of the four attacking creatures since Ruel had flashed-back a Deep Analysis, leaving Oiso enough life to make it through to another turn. He put it to good use, dropping Antoine to 3 with his Angel and using Cunning Wish No. 2 for an Urza's Rage to put it away.

Still joking about the countermagic misplays and, you know, how tough counting is, Antoine offered up a defense: "Hey, come on. I have jet lag. He doesn't!"

Antoine began peeling his cards one by one, declaring "keep" with a lopsided smile just four cards in, looking his opponent squarely in the eye. This one opened with an Overgrown Tomb for Ruel, followed by a Wild Mongrel. Oiso answered with a Scepter (Fire/Ice) that ran into a Putrefy.

At four mana Oiso ran out of lands but a Fact or Fiction put Wrath of God, Island and an Adarkar Wastes into his hand, sending an Exalted Angel and Sensei's Divining Top to his graveyard. Having the benefit of watching over Oiso's shoulder, I had the privilege of watching him orchestrate an outstanding game plan. With his opponent having just one blue mana in play and very little pressure, Oiso continued to develop his mana, waiting for the right moment to force through his key spells, taking hits from the Mongrel while he set up.

Unfortunately for Oiso, that black element of Ruel's deck continued to be a problem. This time it was Duress that showed up. Fact or Fiction fired in response, putting four land in hand and a Wrath in the 'yard, and eventually the following hand was revealed for Duress:

Fire/Ice, Scepter, Wish, Wrath, plus a bunch of mana.

Wish was sent packing, and Antoine passed the turn with UG open. Oiso led with Wrath of God, leaving up enough mana to make Antoine nervous, who counted it very carefully with a smile. Logic stopped the Wrath, and out came Scepter with Fire/Ice with 8 life in reserve. The next upkeep saw the MongrelIced, but Putrefy No. 2 nailed the stick.

This time Oiso led with a Top (possibly baiting, to get a second Wrath through, which he had drawn off the Ice), which resolved. He saw a Cunning Wish on top of his deck and left it there, but lost his Wrath to a Duress next turn. Ruel discarded a Deep Analysis to his Mongrel and flashed it back, then sent in with the Mongrel to drop his opponent to 5.

Oiso went for Wish end-of-turn but ran into another Logic. Desperate, he replayed the Top, fetched a land to shuffle away the dreck, and looked at the three fresh cards on top of his deck. He made a very impressive face, then revealed three copies of Counterspell, scooping up his cards as the Mongrel would be taking him out next turn.

This time it was Careful Study turn one, pitching Roar of the Wurm and Forest, followed by an Aquamoeba (Mana Leak), Mongrel (Mana Leak), and no third land. Duress was answered by Thirst for Knowledge, revealing the following hand:

Reviewing his own hand, Antoine took the Thirst for Knowledge, knowing this would likely come down to a battle of card advantage. Basking Rootwalla was added to the table, but fell to the Rage when it was pumped. At last Ruel found his third land, but things were looking grim next turn when a facedown card was put into play on Oiso's side of the table.

Another Duress revealed a very meaty hand of Counterspell, Mana Leak, Wrath, Fire/Ice. Antoine spent some time on this one and decided to take Counterspell. A new Rootwalla swung in and pumped up, but his opponent was at a luxurious 16, and that's before the Angel flipped and beat in to put Oiso at a commanding 20 life with a hand full of power.

Argothian Wurm was allowed to resolve since Oiso now had his opponent down to 7, saving his last counter for something more important. He used it on Deep Analysis, swung in, then tapped the Wurm, drawing a counterspell. Upkeep brought Putrefy on the Angel, and a Circular Logic forced it through Oiso's Counterspell.

Wrath of God cleared the board, but Quiet Speculation made an appearance, looking to even the resource war up. But there was a problem. Antoine went through his deck three times looking for something else, but evidently a single copy of Cabal Therapy was all he had left in there. Oiso drew a Top with his opponent on one final card. He found an Angel, plus a second Fire/Ice to finish off Antoine if needed, but the facedown Angel was all it took.

Watching anxiously from the rails, his brother Olivier joked about checking the morph, and said something French (but still unprintable) when the facedown card did turn out to be a legal morph card.