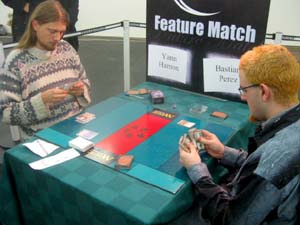 , it's the last round. These two have survived fourteen rounds of swiss at, or near, the top of the standings. Their reward? A do-or-die round. Winner reaches the Top 8. The loser joins the side-events.

We have been following Hamon's draft throughout the rounds. He is quite a veteran on a rampage lately. Bastien might not have the same curriculum but for the next fifty minutes it's all about the decks, and the skills. Not about CVs.

Things did not start well for Perez, who had to mulligan. Things started slowly with the first creature being a turn three Vulshok Berserker from Hamon. Perez answered with Lodestone Myr. Determined to get in on the "good rares" business as well Hamon dropped Arc Slogger.

Perez kept his Myr back and dropped Tel-Jilad Exile. Hamon thought long and hard about his situation and decided to go nuts. He used Slogger twice to kill the Myr and Terror to get rid of the Exile. Perez fell to seven

Tel-Jilad Chosen and Lightning Greaves was the best Perez could muster as far as replacements go. Since the Greaves couldn't protect the Chosen Hamon revealed Electrostatic Bolt to take the game.

Perez started with Lightning Greaves and Bottle Gnomes - not exactly the fastest of starts - while Hamon dropped Myrs and a nice target for Perez's incoming Rustspore Ram: Neurok Hoversail. The Myrs helped power out Clockwork Condor.

Copperhoof Vorrac was Perez's answer. Again Hamon thought long and hard but this time he had no cunning plan. At least not immediately. He passed the turn without attacking. Perez played Viridian Shaman killing the Condor and brought forth the beatingss.

Vorrac, Ram and Bottle Gnomes isn't much of an army, but the Vorrac alone gave Hamon a lot to think about. Both Myrs blocked the Vorrac and Hamon tapped out at the end of turn to kill the Vorrac. He took three mana burn and Bolted away the Shaman.

On his turn he played Goblin Replica, followed by Woebearer. This move was enough to keep Perez's gang at bay. Perez settled in for the long game with Frogmite and Sun Droplet, while Yann Hamon played Moriok Scavenger to return Clockwork Condor. With ground apparently locked, Hamon replayed his Condor. On the next turn he got a gasp from the crowd by revealing Nightmare Lash (with six Swamps in play).

Suddenly the Droplet was not enough. Not even close. Another Swamp and another swing and Bastien Perez dropped to a mere two (three after the Sun Droplet helped him out). He drew his card, thought about it then congratulated Yann Hamon on another Top 8 finish.