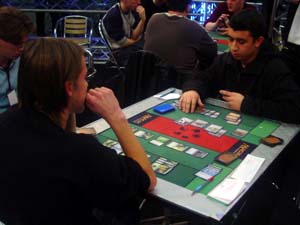 I started covering the match, Farid was already down a game and had Auriok Transfixer, Skyhunter Cub, and Hematite Golem in play. His opponent, Luis, had Tel-Jilad Chosen, Viridian Joiner, and a fourth turn Tel-Jilad Archers.

Farid played out an Auriok Steelshaper and a second Transfixer. Tel-Jilad Chosen attacked and traded with Transfixer, and then Luis played Mirror Golem and removed the Chosen. Farid cycled a Spellbomb and said go.

Mirror Golem attacked for three. Luis played Journey of Discovery and then made a Tel-Jilad Exile. Farid's draw step provided Spikeshot Goblin. Luis cycled AEther Spellbomb and attacked for another three. Farid could do nothing on his turn, and he continued to draw irrelevant cards as Mirror Golem bashed in turn after turn.

Finally, at three, Farid drew and looked impressed. He used Awe Strike to climb back up to six. On the first of his extra turns he ripped Leonin Sun Standard and all of a sudden was back in the game. His army at this point was impressive: Auriok Steelshaper, Hematite Golem, Leonin Skyhunter, Auriok Transfixer, Skyhunter Cub, and Spikeshot Goblin. He sent the entire team and pumped three times, dealing lethal damage out of nowhere. 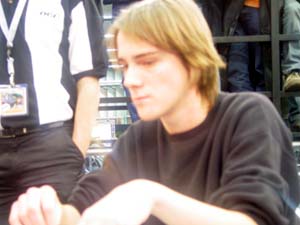 Farid, meanwhile, made Skyhunter Patrol and Skyhunter Cub. Luis searched two lands out of his deck with an entwined Journey of Discovery. Farid played Clockwork Vorrac. Luis made a Trolls of Tel-Jilad. Farid drew a card with his Spellbomb, then made Vulshok Gauntlets and attacked in the air with Skyhunter Patrol. Archers blocked and were regenerated with mana from the Joiner. Farid looked disgusted with his mistake.

Trolls attacked for five and Luis added Fangren Hunter. Farid could only move the Gauntlets and make a War Wagon. Luis chose not to attack on his turn, instead playing a second Trolls of Tel-Jilad. Vorrac grew to 6/6. Farid made a Lightning Greaves and put them on his Skyhunter Cub, but wasn't able to attack. Luis used a fresh AEther Spellbomb to return Skyhunter Patrol to Farid's hand, then attacked with both Trolls, the Archers, and the Fangren Hunter. Cub blocked Archers. Vorrac blocked a Trolls. Transfixer chumped the other Trolls. Net result: Farid took four and lost a Transfixer.

Farid sent with Vorrac and Skyhunter Cub and took Luis to thirteen after a regenerating Viridian Joiner absorbed some damage. Luis returned fire with both Trolls and Fangren Hunter, leaving the Archers back on defense this time. War Wagon chumped a Trolls, Skyhunter with Gauntlets blocked the other, Farid took four and fell to seven.

He untapped and lapsed into thought for what seemed like eternity. Finally, he played a second Vulshok Gauntlets, equipped both on Clockwork Vorrac, making a 13/9 with trample and confidently attacked with the team. Luis scooped in the face of the incoming lethal damage.

But wait…was it lethal? 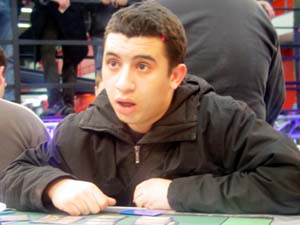 If he put both the Viridian Joiner and the Tel-Jilad Archers in front of the Vorrac, he would take seven points of trample, plus three from the Skyhunter Cub with Lightning Greaves, and two from the Skyhunter Patrol. Adding that up gives the number twelve, which was one less than his life total. Meaning, that he could have lived through the attack, and certainly could have attacked back for lethal damage.

Apparently he erroneously thought that the Clockwork Vorrac had six counters on it. Here's a good lesson: when you're playing for Top 8 of the Pro Tour, double check your math before you scoop.

Farid has now made his second Pro Tour Top 8, with his first being his win in San Diego.