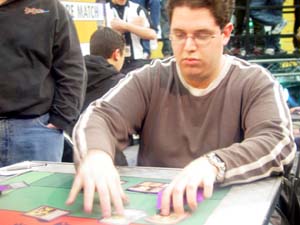 one of these two players will be playing under the Sunday spotlight should come as no surprise. Budde is only the best player ever, and Mike Turian is called one of the greatest Limited minds in history. The problem is, this is the last round, and only one of these players can earn the points necessary to make the Top 8. Two men enter, one man leaves. Bust a deal, face the wheel.

Budde was first on the board with Soldier Replica, while Turian Raised the Alarm and made a Wizard Replica. Soon he had Viridian Longbow shooting down Budde's men. Budde put the kaibosh on that and hoped to get his Vulshok Gauntlets working, but before he could do any real damage, Rustspore Ram took them down.

His next play was a mighty Pewter Golem, but Turian had Auriok Transfixer to keep it at bay. Then he played two Skyhunter Cubs, but couldn't attack. Krark-Clan Grunt was foiling him. Before Turian could rest, Budde ripped Vulshok Battlegear and started serving for six with his Cub. Turian pulled up a Longbow of his own and shot down some of Budde's men.

Then, disaster struck. Though Turian had been using his Transfixer to keep the Pewter Golem in check, the following exchange happened.

And then a moment later...

He didn't ask to take it back, though. He accepted his mistake. He had to throw away one of his Raise the Alarm tokens. Still the Cub sailed overhead. Thirteen. Seven. One. However, Budde was just barely ahead in the race. Turian dropped a Battlegear of his own and swung in, leaving Budde at three.

"It's not enough." He said, and untapped. Turian tapped the Pewter Golem with his Transfixer, leaving himself just a single white mana open. Budde started to attack, and then looked at Turian.

"You don't have Awe Strike maindeck, do you?" - Kai Budde

Still, he could do nothing but attack. If he had it, he had it. Turian flipped it over. Budde scooped.

"Did you draw the Awe Strike?" - Kai Budde

"No, I had it forever. I could've done it when I was on nineteen, but of course I had to set you up to wreck you with Awe Strike. It's like, when you're playing on modo and the guy is 1700, you think to yourself 'He can't possibly have Awe Strike' and he always does. It was like that. It was fun." - Mike Turian 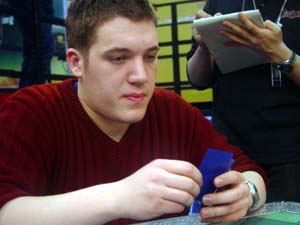 Game 2 was short and brutal. Budde had only played equipment by his third turn, but Turian had a Myr that powered out successive Vulshok Berserkers (he had four). When Budde failed to muster any defense, Turian was handed victory.