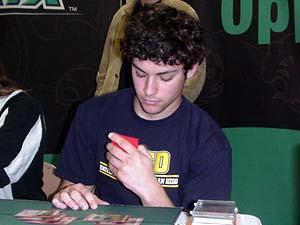 Matt Linde is a former U.S National Champion from Maryland. Along with Brock Parker and William Jensen, he is also the current holder of the Team Pro Tour title. Brian Gates is a resident of Las Vegas, and a relatively new Pro who attended the latest Pro Tour Boston, and the Rochester Pro Tour in Amsterdam. He had three byes coming into the event as a result of his rating. His play this weekend has probably cemented that rating, as he came into the match looking for his first Top 8 fiish. If Gates wins the match, it is probable that he will make the Top 8. If Linde wins, a lot of things have to go right for him in order to make it to the final draft, but he still had an outside shot at the Top 8.

"Have I ever lost when you've covered me?" Linde asked.

"Yeah… Marco," I replied, referring to his loss in the finals of Grand Prix: Atlanta.

Gates won the die roll, and both players kept their hands. An Iron Myr from Gates was answered by Cathodion from Linde, and they were off. Linde assembled a formidable force with Wizard Replica and a Frogmite, while Gates cast more groundpounders in Yotian Soldier and Tel-Jilad Wolf.

Linde cast a Quicksilver Behemoth and a second Frogmite before attacking, and swung with his team. The Wolf and the Frog traded, and the bodies started piling up, with Matt getting through for four. Karstoderm was countered by the Wizard Replica, as Linde made certain that Gates had no formidable blockers in his path. That didn't last long though, as the next turn Gates cast Rustmouth Ogre, only to see it bounced back to his hand by Aether Spellbomb at the end of the turn.

Gates's life dropped to seven on the subsequent attack, since he simply couldn't get any of his creatures to stay on the board. Rustmouth entered play again and actually stuck around for a turn before blocking a Cathodion and getting swept off the board by a ping from an oh-so-fresh Triskelion. Tanglewalker and Arcbound Stinger tried to staunch the flow of blood with a little help from both Predator's Strike and Echoing Courage, but in the end it was all for naught, as Linde kept casting kids and bringing the beats. 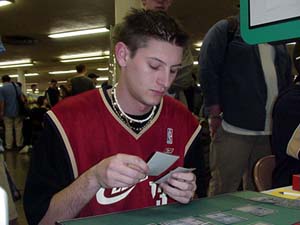 Gates had to Paris before finding an acceptable hand, while Linde drew three lands, Pyrite and Aether Spellbombs, Golem Skin Gauntlets, and an Arcbound Worker. Echoing Ruin made sure Gates had no acceleration before Linde dropped his entire hand on turn 3, and followed it up with a Cathodion. "Nice Constructed deck, Matt!" came from the crowd, as Linde moved forward with his ridiculous draw. Brian's deck clearly let him down, as he could find no removal to help him stabilize the board, and Matt's series of three-power creatures plus the spellbombs succeeded in rapidly ending Brian's chance to sit at the final table. Linde flipped over the top card in his deck after Brian extended the hand, revealing Broodstar, and proving that the best Affinity decks in Limited can look an awful lot like their Type Two counterparts.

Linde: My deck was insane. I had three Frogmites, a Broodstar, and a bunch of spellbombs. The Affinity cards just kept coming to me. I actually had a chance at four of the Blue spellbomb, if I wanted them. I'm sorry I had to beat a guy who probably would have made Top 8, but I still had a chance, so I had to play.