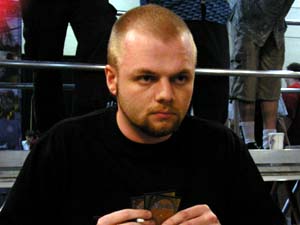 Herzog is getting to the point where he needs no introduction. In fact, he needs no more match points either, having already clinched a Top 8 berth. Why not concede to Rookie of the Year Masashi Oiso? Well, his good friends Anton Jonsson and Antoine Ruel were hoping for a spot in the Top 8 as well, and asked Herzog to play in an attempt to increase their chances.

"Anton just calculated that three things have to go right, and this is one of them," he said, clearly feeling regret that he had to force Oiso to play. "It's interesting. The same thing came up last round but I asked both Antoine and Anton at the last minute and they both said, 'It's okay, go ahead and concede.'"

A moment later he added, "There's an additional thing with Mike Turian…first of all he's a good friend, second of all, he always drafts White. It's nice to know what your fellow Top 8ers are drafting."

Eventually the competitors finished shuffling. Oiso started with Bonesplitter and Darksteel Pendant, then immediately used it on his next upkeep to ship a Mountain to the bottom of his library. Herzog had Grimclaw Bats and attacked for one point, then followed up with Emissary of Despair.

Oiso chose to put a Swamp on the bottom during upkeep, then drew Lodestone Myr and passed the turn with only three mana, sighing. Both fliers attacked and Herzog pumped twice, hitting for seven. He played a second Grimclaw Bats. On end step, Oiso used Pulse of the Forge to take Herzog to 14.

On his upkeep he declined to use the Pendant but didn't have a fourth land. He could only play Lodestone Myr and end his turn, bracing himself for a huge hit. Herzog sent the team and pondered how much to pump. It was seven damage minimum and he had four Swamps available, with Oiso at 12. Eventually he pumped twice and took Oiso to 3, then added Spincrusher with a Mountain up.

Oiso drew, thought, and sadly packed up his cards.

In the second game Oiso had no third land, though he did have a Talisman of Unity. He played Goblin Replica. It was killed with Echoing Ruin and Nicolai's Myr attacked for one. Oiso could only add a Morningstar, still stuck on two lands. Nicolai played a menacing Nim Shambler.

Oiso pleaded with his deck and it rewarded him with a Swamp. He targeted the Shambler with a Consume Spirit for one, but the Myr was sacrificed for a regeneration shield. Herzog played Wizard Replica and smashed in for three. Oiso found a Mountain waiting for him, then played a Dross Golem and gave it the Morningstar. The creature was Shattered on end step.

Herzog attacked for four, taking Oiso to 12 and started to play a second Nim Shambler. He held it back for a second, perhaps fearing Echoing Decay, but then realized that Oiso would have used it already if he had it. The Shambler hit the table.

Oiso played a fifth land and said go with three cards in hand. Nicolai summoned a pre-combat Dross Golem and sent the team. Oiso targeted one of the Shamblers with Betrayal of Flesh and scooped three of his lands into the graveyard, trading them for Goblin Replica. Oiso took five and fell to seven.

He drew, played a Mountain, and said go, sitting on mana to activate his Replica. Herzog swung into the red zone with Wizard Replica, Nim Shambler, and Dross Golem. Goblin Replica eventually jumped in front of Dross Golem and was sacrificed to kill the Wizard Replica after damage. Oiso fell to two life and Herzog flipped over Death Cloud. 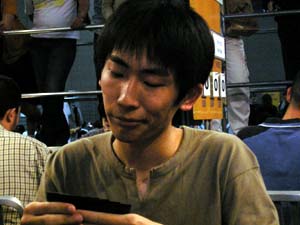 Both players were dejected as they packed up their cards in silence, with the language barrier preventing any meaningful conversation. Eventually Nicolai glanced over, saying, "I've never felt worse in my life about winning."

There's a happy ending to this story. When the final standings were announced, it turned out that all four of the people involved had somehow made it to the final day. Nicolai, Antoine and Anton all made it comfortably, and Masashi Oiso squeaked in as the only player at 11-4 to earn a spot. Tune in tomorrow to see these four, along with Mark Herberholz, Ben Stark, Angel Perez del Pozo, and Mike Turian in the Pro Tour San Diego Top Eight.