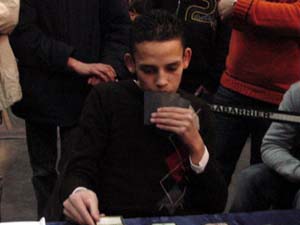 Maurice Palijama keeps his cards where he can see 'em

hails from Groningen, a town in the north of the Netherlands. He is playing for his first GP top 8. Hans Joachim (aka HaJo) was a pro tour regular with a PT top 8 back in the days. The last couple years this German took a break for Magic and devoted himself to the Versus System game. But he got back on the Magic scene again lately. An understandable move, and not only because Magic is just a lot more fun to play. HaJo drafted a Boros deck, while Maurice brings a Golgari/Selesnya deck to the table.

HaJo got to play first, but had to start with a double mulligan. Consequently, his Boros deck could not get off to a fast start. Maurice took advantage of this by playing Transluminant, Thoughtpicker Witch and Lurking Informant. The little beaters came in for a few points before HaJo played his first spell in Torpid Moloch, who wondered what it was doing in a Boros deck. On the next attack, the 3/2 wall blocked the incoming Thoughtpicker Witch. Seeds of Strength pumped it up to 4/4 size, and HaJo sacrificed the dying wall to a Fiery Conclusion. He killed the Lurking Informant with it. HaJo then drew into his 6th land and played Coalhauler Swine (nice deck). Maurice then figured it was time to play the Pollenbright Wings that he had had in his hand for a while already. He slapped it on Transluminant, for a lack of better targets. HaJo quickly used Faith's Fetters to take care of that problem and he stubbornly kept on sending his Swine in.

Maurice added a Dimir Guildmage and a Dimir House Guard to his board, while HaJo made a Sabertooth Alley Cat. Some trades followed and Maurice played Ursapine, hoping that HaJo was out of removal. He encountered quite the contrary; HaJo played Hour of Reckoning to clear the board. Well, except for Maurice's Dimir House Guard, whose regeneration ability allowed it to survive. HaJo was already low on life and he had no removal for the fear guy. Therefore, he relied on the top of his deck. He did find a Blockbuster (another nice card!), but ironically, he was down to 3 life at that point. Maurice just attacked a couple more times with Dimir House Guard for the win.

I'll apologize for the bashings of HaJo's deck. I don't mean it in a degenerative way, but a controllish Boros deck like HaJo's special is just a very rare sight. Usually, Boros decks tend to be blazing fast with lots of early drops. The Germans apparently tend to disagree…

No mulligans this time. Maurice stalled on two lands and a Signet for a while, unable to cast anything. HaJo made a Molten Sentry, but the die roll was not in his favor. Instead of getting a hasty 5/2 against his mana screwed opponent, he got a useless Wall. Maurice's deck then decided to give him some lands, enabling him to power out Golgari Rotwurm. HaJo quickly destroyed the Rotwurm with a Fiery Conclusion, sacrificing his unfortunate Wall. The German then made an Ordruun Commando and started to hit for 4. Maurice only played Lurking Informant and Thoughtpicker Witch. Surprising. I expected more impressive cards, now that he was up to 5 lands. 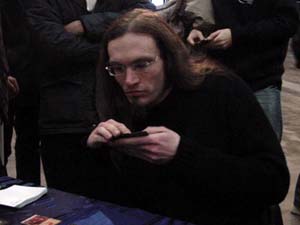 HaJo's deck surely did not fail to impress though, with … drumroll … an Instill Furor on the Informant. Next up was Viashino Fangtail, which was killed by Last Gasp right away. Maurice then cast a Watchwolf and used Seed Spark took care of the terrifying Instill Furor. Yawn. Okay, so what was going on? HaJo (at 17 life) had an Ordruun Commando that had hit Maurice to 12, while Maurice's board was much better; Lurking Informant, Thoughtpicker Witch, Watchwolf, and a couple tokens.

Nevertheless, by using his spells (Boros Fury-Shield, Galvic Arc and and Cleansing Beam) in cunning fashion, HaJo managed to take Maurice down to 3 life. This way, he maneuvered himself into a position where a Lightning Helix, Blockbuster or another burn spell would mean game. Unfortunately for him, Maurice cast Auratouched Mage and searched Pollenbright Wings out of his deck. Combined with the Thoughtpicker Witch, the 3 tokens a turn meant that HaJo wouldn't draw a spell ever again. HaJo saw he was done for and scooped it up.

The Dutchman's inexperience and nerves caused him to make a couple subtle misplays throughout the match, but it definitely seemed like he drafted the better deck.

Maurice beats HaJo 2-0 and advances to the top 8.