Round 15 Feature Match: Causing a Ratchet

Pro Tour Dark Ascension entered the next-to-last round of competition with three Pro Tour Hall of Fame members in contention for the Top 8: Jon Finkel, Brian Kibler, and Jelger Wiegersma. It was Wiegersma, however, who found himself at the feature match table. His opponent was Japan's Mamoru Nagai who was a lock for the Top 8, a fact wasted no time in trying to leverage.

"You're already in Top 8?" He asked his opponent. After a nod from Nagai he added, "You should concede!" The statement earned only a confused look from his opponent, its meaning lost in translation. 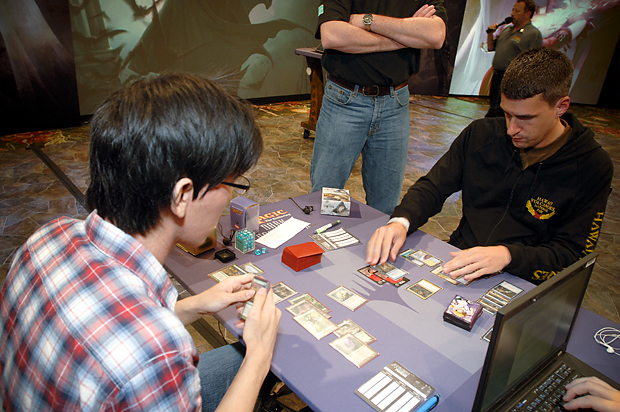 Hall of Famer Jelger Wiegersma was not getting out of this round the easy way. His opponent, Mamoru Nagai, came to game.

A first-turn Gitaxian Probe from Wiegersma revealed his opponent to be playing some type of black and green deck. The Japanese pro's grip included Solemn Simulacrum, Acidic Slime, and Rampant Growth, and he led with a Woodland Cemetery for his opening land. Across the table his European opponent went probe crazy casting a second, then third, then using Snapcaster Mage to flash one back from the graveyard all in a single turn! That left Wiegersma at just 12 life while his opponent accelerated his mana with a Rampant Growth.

A Lingering Souls for Wiegersma gave him a heartier ground force, but his opponent managed to stall things significantly with a Solemn Simulacrum. But the 2/2 Robot was dealt with via Dungeon Geists and Wiegersma was able to get his beat on, making the totals 14-12; they still weren't in his favor, but at least he was getting on the board.

The players traded back and forth, Nagai casting Acidic Slime while his opponent had Drogskol Captain. The 2/2 Captain allowed Wiegersma to drop his opponent to just 6 and Nagai found himself in difficult to maneuver territory. He needed a solution to his opponent's flier, Dungeon Geists, Drogskol Captain, and the spirit tokens being pumped by said captain.

Did he have it? He used an Evolving Wilds to find a Mountain, revealing a likely red, green, and black version of the Wolf Run deck as his chosen pick for battle. He used Doom Blade to take out his opponent's Captain, then cast a second Solemn Simulacrum. The play left him tapped out, however, and Wiegersma revealed a Vapor Snag in his hand to deal exactly lethal with his next attack; the players headed to the second with Wiegersma leading. 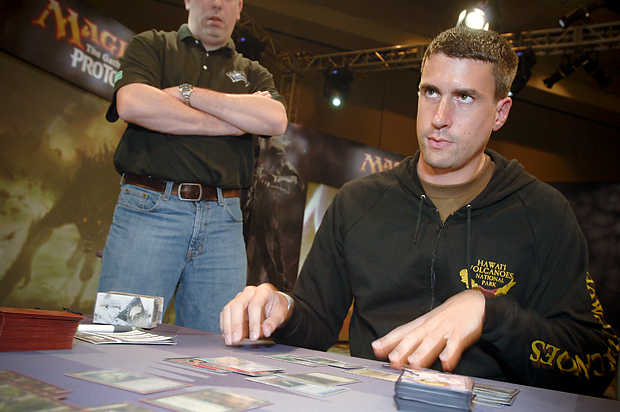 Wiegersma takes an early lead with his spirits.

With a language barrier impeding communication, the two players shuffled in total silence for the second game.

The infamous Delver of Secrets led the way for Wiegersma in the second game, though he was on the draw. In no time it was an Insectile Aberration before being joined by to spirits from a Lingering Souls. Doom Blade took out the 3/2 flier, but Wiegersma continued dropping elbows as he plunked Drogskol Captain to the battlefield. The 2/2 buffed his team of spirits and allowed him to put the totals at 20-12 in his favor.

Curse of Death's Hold for Nagai helped him scramble to catch back up but thanks to the Captain it served mostly to put Wiegersma's team back to fairer size. Solemn Simulacrum gave Nagai an extra land but what he was really looking for was a flying blocker. He wasn't finding one, and fell to 6 from Wiegersma's repeated attacks.

Black Sun's Zenith wiped Wiegersma's team from the battlefield as Nagai successfully stabilized. Without Captain on the battlefield Wiegersma's job of winning became a lot harder: the Curse of Death's Hold would keep his 1/1 tokens well in hand. A second Solemn Simulacrum joined Nagai's first and he began to beat his opponent down. 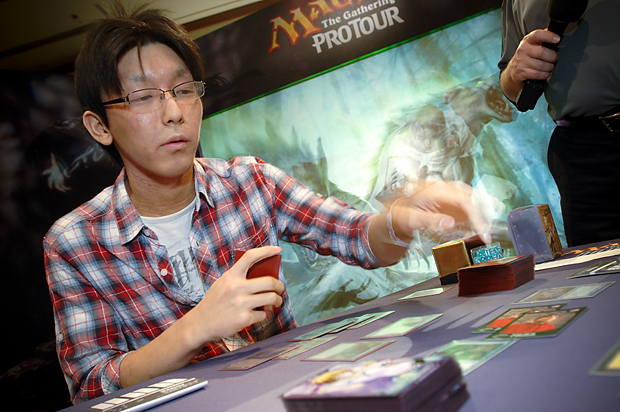 Nagai's three-color variant on Wolf Run Ramp proved to be a valuable tool for him throughout the tournament.

With things looking bad for him, the European Hall of Famer's Delver Spirits deck failed to assist. When Nagai resolved a Primeval Titan and searched up his deck's namesake Kessig Wolf Run it was over.

The early plays of the final game of the match moved slowly, and it wasn't until the third turn that Wiegersma cast a creature in the form of Delver of Secrets. The 1/1 became a 3/2 the following turn while Nagai worked on building up his mana via Birds of Paradise and Solemn Simulacrum. A second Delver soon joined Wiegersma's first and Nagai tried to catch up with a Glissa, the Traitor and Ratchet Bomb. The combo allowed him to take out his opponent's Insectile Aberration without losing the Ratchet Bomb and forced Wiegersma into the tank in order to come up with a new plan.

The Glissa/Ratchet Bomb combo left Nagai in the driver's seat and Wiegersma tried to dig his way to a new plan with Snapcaster Mage and Ponder. A Moorland Haunt was what he came up with, but the creature-creating land was unlikely to be good enough; the spirits it could generate were immediately vulnerable to Nagai's Glissa combo!

A Vapor Snag allowed Wiegersma to finally break up his opponent's combo, stranding the Ratchet Bomb in Nagai's graveyard, but he was still facing a superior board. To make matters worse, after re-casting the 3/2 Nagai could potentially get the Bomb back anyway if at any point in time his opponent had a creature die. Glissa began attacking for Nagai, but a Primeval Titan proved too greedy as it was countered via Mana Leak from his opponent. A Grave Titan, however, resolved successfully a turn later and Nagai had the match in hand. The following turn Wiegersma extended a handshake and scooped up his cards.

1 Go for the Throat 3 Doom Blade

4 Sphere of the Suns 2 Ratchet Bomb

1 Glissa, the Traitor 1 Liliana of the Veil 1 Viridian Corrupter