While Naoki Shimizu may not have a particularly high profile outside of Japan, the Pro Tour Austin Top 8 competitor is one of the most popular Magic writers and theorists within his home country. However, a second Top 8 finish here would certainly cause the rest of the world to take notice of the long time contributor to the game.

Shimizu's opponent for this round is another player on the verge of international stardom: Pro Tour Dark Ascension Top 8 competitor Denniz Rachid. 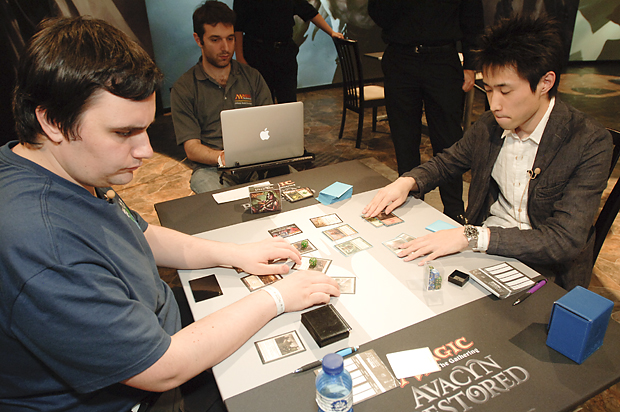 Denniz Rachid and Naoki Shimizu are both hoping to add a second Pro Tour Top 8 to their resumes. 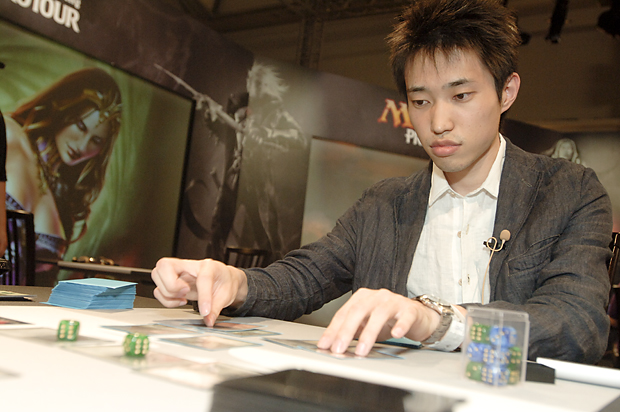 At a dangerous 1 life, Shimizu needs to tread carefully.

Shimizu got a glimmer of hope when Rachid passed his turn without casting a spell, allowing Huntmaster to transform into Ravager of the Fells (killing Thalia, Guardian of Thraben in the process), but Shimizu still needed a lot to go right for him to get back into the game.

Shimizu quickly assessed the situation and attacked with his Ravager of the Fells, prompting Rachid to cast a (would be lethal) Divine Reflection.

Shimizu then demonstrated that this was exactly what he was hoping Rachid would do by casting a Restoration Angel, flickering the Ravager (which came back as a Huntmaster of the Fells) and giving the Japanese pro a bit of breathing room.

However, all of Shimizu's hard work was for naught as a second Divine Reflection a turn later was enough to put Rachid up a game.

Shimizu got off to a good start with Avacyn's Pilgrim, Borderland Ranger, and a Huntmaster of the Fells, but Rachid came back strong with a Gather the Townsfolk, Silverblade Paladin, and Garruk Relentless.

Garruk Relentless took out Shimizu's Huntmaster of the Fells before dying during Naoki's next combat step.

At this point, the players were at something of a stalemate. 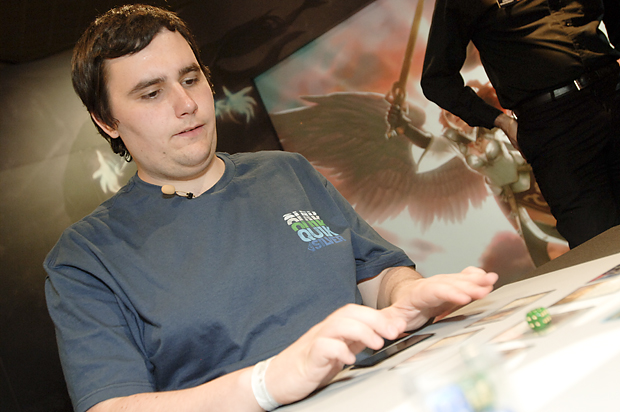 Rachid is one win away from locking up his second straight Pro Tour Top 8.

And while Shimizu had a Restoration Angel and a Wolfir Silverheart to give himself some seriously large threats, he just couldn't compete against Rachid's army of Sigarda, Host of Herons, Druid's Familiar, human tokens, and Gavony Township.

A few turns, and a few attacks with Sigarda, Host of Herons later, and Denniz Rachid found himself an intentional draw away from his second Pro Tour Top 8 of the year. Shimizu, however, would have to win his next match and then hope tiebreakers go his way.