Share Article
Share Tweet Share
is it folks, the big one, the match to see who gets to take on The Great One in the finals. Mattias comes in with the advantage, as a win for him gives him the slot outright. For Zvi to make it he needs to win here and then he needs Carlos to lose his match, allowing him to make it in on tie-breakers.

Zvi comes to this battle armed with a Psychatog variant sporting green for Pernicious Deed, which he hopes is the answer to the Affinity decks many expected to see in this format. And that's exactly what Mattias is running. How did it turn out? Let's find out.

Game 1 started impressively for Jorstedt's affinity deck. Over the course of the early turns he played out 2 Arcbound Workers, 2 Frogmites, a Myr Enforcer, a Disciple of the Vault, and 3 Thoughtcasts. What did Zvi play in answer to all that?

Stuck on two land, there wasn't even a remote chance he was pulling this one out in the face of that kind of start and he scooped a turn later facing lethal damage.

This one opened better for Zvi but his slow control deck felt outclassed unless it actually got out a Deed early, and this game the Deeds didn't make an appearance either. Mattias led with an Arcbound Worker turn 1, played a Skullclamp turn 2 (which Zvi stopped with Mana Leak) and then also dropped out a Frogmite. From here out Zvi was on defense, trying to find some way to contain the Onslaught of under-costed threats. Things continued smoothly for Mattias, who continued to flood the red zone with his beaters while replenishing his hand with double Thoughtcast. Zvi had lots of cheap removal in the form of Smother and Oxidize, but Jorstedt had too many threats that needed to be dealt with. Zvi tapped out for Deep Analysis looking for answers and then had to cast another one the next turn leaving just a green mana open. But it was Mattias that had all the goods, dropping out a Disciple of the Vault and 2 Myr Enforcers that meant business. On the next swing Mattias was coming in for lethal damage. Zvi used his last mana to Oxidize one of the Enforcers, but Mattias had a Shrapnel Blast to seal the deal and guarantee himself a slot in the final against Bob Maher Saturday night in San Diego. Congrats Mattias! 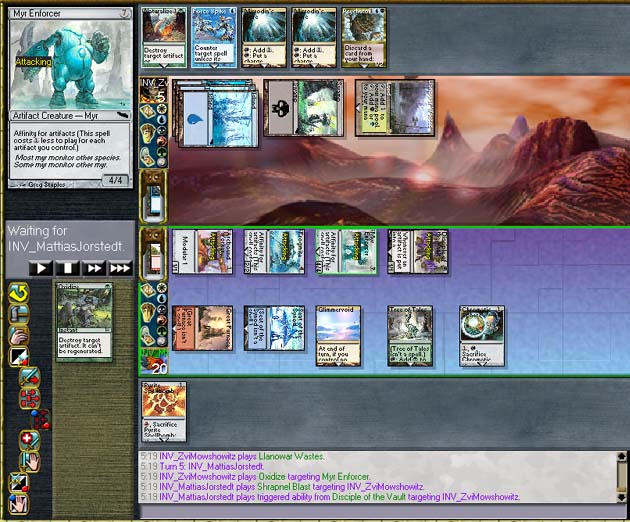