ith only two rounds left to play, No. 2 Ranked Player Reid Duke and Guillame Wafo-Tapa have a great deal on the line for this match. Sitting at 11-3, the winner will likely secure themselves the ability to safely draw into the Top 8 in the final round, while the loser will need to win the next round and then rely on fate to see if their tiebreakers carry them to the last one or two spots of the Top 8.

Sitting in second place in the Player of the Year standings, Reid Duke has the ability to leapfrog current Player of the Year frontrunner Jeremy Dezani with a Top 8, giving himself at least a three-point lead going into the home stretch of the season. As it stands, he sits with a four-point lead in the North American region over teammate and good friend Owen Turtenwald. Turtenwald is on course for a likely Top 50 finish, so he would keep the gap from widening too much, but Duke would still command a nearly twenty-point lead with merely a Quarterfinals finish. In addition to locking up the World Championship spot, Duke would secure himself the captaincy on his very first US National team for the World Magic Cup.

Wafo-Tapa, on the other hand, needs the Top 8 finish to lock up Platinum status for next season. The taciturn French deck-builder is up against tall odds to secure himself a spot in the World Championship or World Magic Cup, as Jeremy Dezani appears to have a vice grip on those positions at the moment. Still, with the points he would earn from a win, he would certainly vault high enough into the standings to be in the running for one of the at-large spots at the World Championships, so it's not out of the realm of possibility. 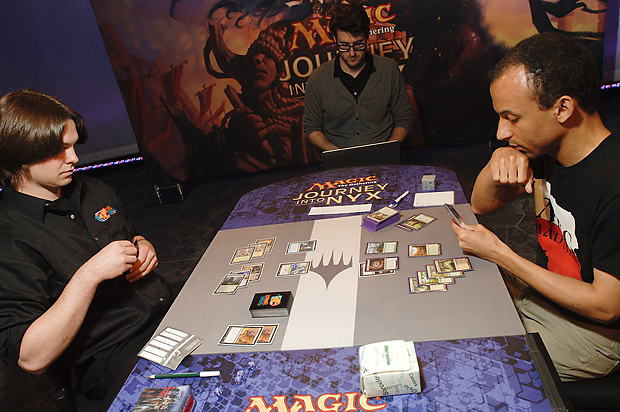 No. 2 Ranked Player Reid Duke and Guillaume Wafo-Tapa needed a win in order to lock up a Top 8 this weekend. Who would secure their spot into Sunday with this match?

Duke is running the Pantheon version of BUG Control, one of the most successful decks of the tournament. Courser of Kruphix and Sylvan Caryatid provide the defense and the acceleration, while a slew of removal spells keep the path clear for Prophetic Sphinx. This version of the deck is far more geared to dealing with the aggressive deck and synergistic decks, like constellation, than the more control-oriented ChannelTireball Prime version. This should provide him a bit of an advantage in this matchup.

Wafo-Tapa is playing the most-represented deck in the tournament: Junk Constellation. Like Duke's deck, the Junk Constellation deck runs Courser, Caryatid, and black removal, but opts for white over blue in order to cast cards like Banishing Light and Elspeth, Sun's Champion. Also, unlike Duke's deck, Wafo-Tapa's deck uses Eidolon of Blossoms and Doomwake Giant to take advantage of the numerous enchantments in the deck. The deck has certainly underperformed here in Atlanta, but Wafo-Tapa has obviously been able to make things work for him up to this point.

As far as threats go, Prognostic Sphinx is one of the finest in Theros Block Constructed. Able to turn most removal spells in the format into simple discard spells, the Sphinx also has the ability to deal with and evade one of the most powerful cards in the format: Elspeth, Sun's Champion.

Despite this incredible resilience, it was Wafo-Tapa's unwavering and timely attempts on Duke's Prognostic Sphinx that determined the outcome of this first game. It began early, with multiple Brain Maggots taking their toll on Duke's hand. Duke looked like he might have an easy out to a victory early with Kiora, the Crashing Wave, but a Courser of Kruphix from Wafo-Tapa revealed a Hero's Downfall that would arrive to save the day one turn before she began summoning her loyal army of krakens. Duke opted to get an extra card out of her, accepting her impending fate. 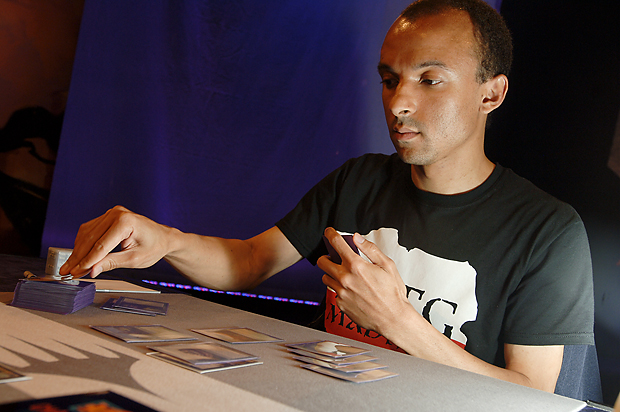 Despite forgoing his favored color of choice, blue, Wafo-Tapa's deck still aims to grind the opponent down to dust through card attrition.

Then, after landing a Prognostic Sphinx, the screws really started to tighten. Wafo-Tapa aimed a steady barrage of removal spells at the Prognostic Sphinx, slowly depleting the cards in Duke's hand. Courser of Kruphix gave Wafo-Tapa the cards he needed to keep attacking the Sphinx, eventually dropping Duke to his last card. Unfortunately, he couldn't use it to save his Sphinx from the ensuing Hero's Downfall because he needed the Downfall he himself was holding to kill the Elspeth revealed by the Courser.

With Duke completely out of cards, Wafo-Tapa had the clear advantage. Between the Courser and the two Doomwake Giants that followed it, the hard-fought first game ended up in Wafo-Tapa's corner.

The second game began with a pair of mulligans from Wafo-Tapa, putting his back against the wall early. He managed to gain a step back with Courser of Kruphix and Eidolon of Blossoms, but each was only able to net him one extra card before they died, effectively bringing the game back to parity. From there, Duke absolutely took over, netting two-for-ones with a variety of different cards. Psychic Intrusion took a Hero's Downfall from Wafo-Tapa's hand, using it to kill a Doomwake Giant a turn later. Multiple Read the Bones kept his hand full. Even Kiora effectively two-for-one'd Wafo-Tapa, forcing him to use both of the Hero's Downfalls in his hand to keep the planeswalkers off of the board.

While Duke's advantage grew in spurts and starts due to all of these little exchanges, it absolutely gushed when he landed a Psychic Intrusion and managed to steal an Elspeth, Sun's Champion. He used a Thoughtseize to strip Wafo-Tapa of the Banishing Light he also held on the following turn, leaving him completely defenseless to his own planeswalker. 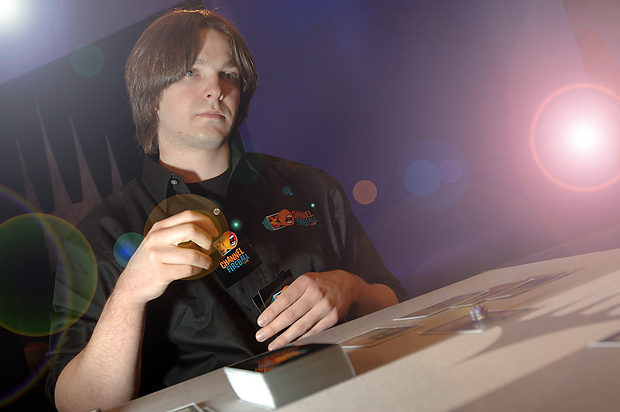 Duke shows off the power of his team's tech Psychic Intrusion.

The final game of the match was a bit of a downer given how interesting the other two games of the match were, even considering Wafo-Tapa's mulligans in the second game. Multiple copies of Courser of Kruphix came down for Wafo-Tapa, but each time they were sent packing with Unravel the Æther. When the second one went away, it took an Extinguish All Hope on the top of his deck with it, clearing the way for Duke to cast and begin attacking with his Prognostic Sphinx. Wafo-Tapa tried to slow it down with the occasional removal spell, but it wasn't good enough. His real problem was the lack of white mana sources that plagued him in the latter part of the game. With only one Temple of Plenty in play, he was forced to sit and stare at the Elspeth, Sun's Champion, that would have been able to take over the game had he been able to cast it the turn he drew it.

With his victory over Wafo-Tapa, Duke shook his hand with a big smile on his face, Reid Duke sauntered over to the edge of the feature match area, where the other members of Pantheon were assembled and waiting. Walking into a big hug from Owen Turtenwald and Huey Jensen, Duke radiated happiness. This win almost certainly locked him in to his first ever Pro Tour Top 8, the Player of the Year lead, and an almost guaranteed spot at the World Championships later this year.

4 Eidolon of Blossoms 3 Silence the Believers