Chang is the former Taiwanese National Champion and a Pro Tour fixture. William Moreno is a Texan - making the move to New York next week - playing in only his third Pro Tour. The winner of this match was hoping for a chance to draw into the Top 8 next round. The loser of this match was hoping for some lovely parting gifts - or at least a chance for a last-round win-and-in situation.

Chang was playing Red Deck Wins that touched white for Lightning Helix and some sideboard cards. He had plenty of burn, including Char, as well as Flametongues which could prove tricky for Moreno's deck. Moreno was playing a deck that Mason Peatross dubbed MadTog2020. He combined elements of Madness and Tog to create a deck that looks and feels quite different from the Golgari Madness deck that made so much noise on day one.

While he does feature From the Loam he only is running one cycling land - and it is his 61st card at that. Instead his deck tries to abuse Loam with Cephalid Coliseum and Centaur Garden.

Moreno trotted a Basking Rootwalla out on the first turn and Chang hit it with Firebolt. Aquamoeba on the second turn churned out another Rootwalla while Chang was tapped out. There was a Frostling for Chang.

Moreno attacked for two. He could not get any action off of either of his creatures since the Frostling would kill either in response. He just played a Chrome Mox and passed. Chang tossed out a hasty Slith and attacked with both his guys. Moreno Madnessed up Arrogant Wurm. While Madness on the stack, Chang Lava Darted the Aquamoeba. The Wurm grew fat on the Slith. 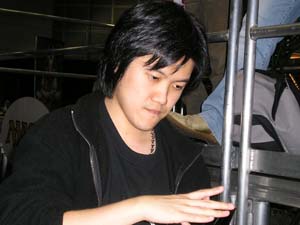 Moreno untapped and played Umezawa's Jitte. He equipped his Arrogant Wurm and attacked. Nick West, who was clinging along the wall like he had been bitten by a radioactive spider, drew a big laugh from the crowd as he stage whispered to Moreno's girlfriend, "That is really good."

Moreno removed one counter to kill the Lavamancer. Mike Flores made the boo-boo face and looked forlornly at the weapon wielding wurm, "I really wish I played that deck."

Chang had nothing and passed the turn. Moreno swung in again but did not remove the remaining counter to pump his attack. He was wary of Char. Chang realized he had litte time left to pull himself out of his pickle and used Magma Jet on Moreno end-of-turn. He scryed into Pillage and buried the equipment - Moreno gained 6 life.

It still appeared that Chang had no way to deal with a 4/4 trampler. He played Grim Lavamancer and put his Blinkmoth in the path of the oncoming bus and fell to 1. Chang killed the Wurm on the next turn by using everything he had. Both players seemed to be out of gas, with only Chang's Lavamancer still standing.

Chang attacked for one with his Lavamancer. Moreno played an Aquamoeba. Chang's Slith hung back on chump patrol and held off the Aquamoeba. Grim Lavamancer eventually took down the Aquamoeba with a little help from Lava Dart. Moreno seemed to be drawing nothing but lands. Eventually he found Deep Analysis, which resulted in yet another Aquamoeba. Chang used his Lavamancer on Moreno. He untapped and tried to Lightning Helix the 1/3, but Moreno had the Circular Logic. He had to madness it out though so Chang flashed back Lava Dart instead.

Moreno finally drew something and cast Gifts Ungiven for Tog, Mongrel, Basking Rootwalla, and Wonder. Chang gave him the latter two. Flametongue made short work of the Rootwalla and Lavamancer got in there for a point.

Moreno could not draw anything and despite being at seven had to flash back his Deep Analysis and got to four. He found a Wild Mongrel and Darkblasted the Lavamancer.

Chang sent in the Flametongue and Moreno blocked and pumped his dog to a 5/5. Chang finished it off with Lava Dart. He dredged up Darkblast and played his Wonder. Chang looked forlornly at the situation. He could only find one way out - a draw. He cast Char and it finished off both players.

Moreno had won the die roll and got the opportunity to play first for this game as well. He had to ship back his opening hand but seemed content with the next six. He made no plays on the first two turns but when Chang offered Slith Firewalker, it was Smothered.

He laid a third land and still had no play. Chang attempted to Magma Jet on upkeep but Moreno had the Circular Logic. Chang cast Molten Rain on the next turn. Moreno returned the land to his hand with from the Loam and replayed it.

There was an upkeep Jet from Chang again and Moreno's precious points of life were tricking away. Firebolt and an attack from the Lavamancer left him at 10. He imprinted a Mox and hard-cast Arrogant Wurm. Chang took advantage of a tapped-out opponent to cast Char on his own turn, dropping Moreno to five.

Moreno untapped with a relieved sigh. He played and equipped Jitte to his monster. He attacked for four and tossed a counter at the Lavamancer. Chang scooped on his next draw step as they announced time for the round - they did have 10 additional minutes from a deck check, but there was still a very real danger that the match could end in a draw - something neither of them really wanted.

Chang's turn-one Frostling was matched by a first-turn Mongrel from Moxy Moreno. Neither player attacked for two turns unwilling to get into a fight over the Mongrel. Finally Moreno attempted to madness out Arrogant Wurm. Chang killed it with Helix and Frostling. 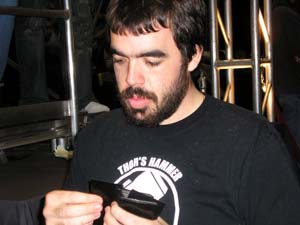 Moreno inched closer toward the Top 8 as the clock ticked down.

Moreno played a second Mongrel. Chang made another ersatz Mogg Fanatic. Moreno beat in for four a turn with his pair of dogs. Eventually Chang Charred one. He untapped and cracked a fetch land which ultimately dropped him to three for an untapped Foundry. Flametongue resolved and killed the other Mongrel.

Romero had no play and passed the turn back to Chang who played a morph, which was promptly Smothered -- and turned out to be Exalted Angel!!!

Moreno had one Rootwalla in play and another one showed up after Careful Study. Time was called and the players went into extra turns. Chang needed to win while Moreno only needed an incomplete. When Chang swung back with Flametongue he chump blocked with the Rootwalla. Grim Lavamancer and Lava Dart finished off the remaining Rootwalla. Darkblast got the last bit of damage to finish off the Flametongue. He dredged it back to kill the Lavamancer and assured that there would not be enough time for Chang to finish him off.