Round 15: The Gathering Storm

"Is this foil?" Paulo Vitor Damo da Rosa of Brazil asked his opponent as he shuffled his deck.

"No, double sleeved," Yoshihiko Ikawa of Japan pointed out. Both were in contention for Top 8 with a win in the final two rounds of the event and a blessing from the pairings fairy.

Though he was on the draw instead of the play, Paulo was the first to cast a creature dropping Lotus Cobra on his second turn. The 2/1 mana engine was quickly exiled by Journey to Nowhere from Yoshihiko, and the game settled into a "draw, go" affair with neither casting creatures. Yoshihiko's first nonland permanent was a Jace, the Mind Sculptor he used to start Brainstorming himself into extra cards. He didn't have long to do so, however, as Paulo promptly cast his own copy of the planeswalker and sent both to the graveyard. 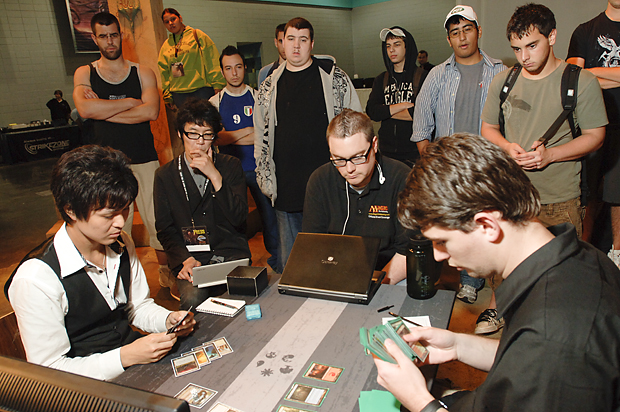 Oracle of Mul Daya was next up, and it hit for Paulo Vitor's blue-red-green Comet Storm deck. It was answered by a second Journey to Nowhere from Ikawa, but not before netting Paulo an extra land. The two struggled to get an edge, with the Brazilian side of the table using Lotus Cobra and Raging Ravine while the Japanese half of the battlefield cast Gideon Jura. Yoshihiko's planeswalker didn't last long, however, as the creature-land, Cobra, and a Burst Lightning teamed up to take him from eight loyalty to zero.

Paulo's Raging Ravine began causing problems for Ikawa as it ticked up to a 5/5 and took out a Jace, the Mind Sculptor; if the Japanese pro didn't find a solution to the land, he was going to find himself headed for sideboarding. He worked to prevent that end by casting Wall of Omens, netting himself both a blocker and a draw.

Deciding he needed to resolve another creature, Paulo Vitor Damo da Rosa began casting spells rather than simply attacking with his land. Each was countered, meaning Paulo was short two Avenger of Zendikar and an Oracle of Mul Daya. After all those spells hit the bin, he decided to start sending the Ravine at Ikawa again. Yoshihiko had bought himself enough time to come up with a solution: Gideon Jura. He used the planeswalker to tie up his opponent's combat step, then began attacking Vitor with the 6-powered creature ability. An Emeria Angel followed by a land drop also allowed Yoshihiko to begin clogging up the ground, and Damo da Rosa decided to stop attacking altogether. With his Ravine a whopping 8/8 when activated thanks to numerous attacks, he could use it to block Gideon if he needed.

Attempting to take out the Emeria Angel, Paulo cast Flame Slash on the 3/3, but the sorcery was countered with Deprive. The Brazilian was down to 6 from his opponent's slow, grinding attacks and needed help fast. Yoshihiko piled on casting a kicked Sphinx of Lost Truths, then dropped a land to make an extra Bird. Paulo was down to a final draw step, but whatever he was looking for, he didn't find it and the players were on to Game 2.

The second game started off with a mulligan for both players, but while Paulo quickly agreed to keep his hand of six, Yoshihiko took a long time to determine whether he was happy with his or not. Ultimately he decided it was good enough to keep, but when his opponent had a second-turn Lotus Cobra with Ikawa unable to use Journey to Nowhere on it, the Japanese player didn't seem happy. Paulo sent his creature to the red zone only to find Yoshihiko sitting on a surprise: Pitfall Trap. Paulo used Spell Pierce to counter, and the 2/1 stayed alive. 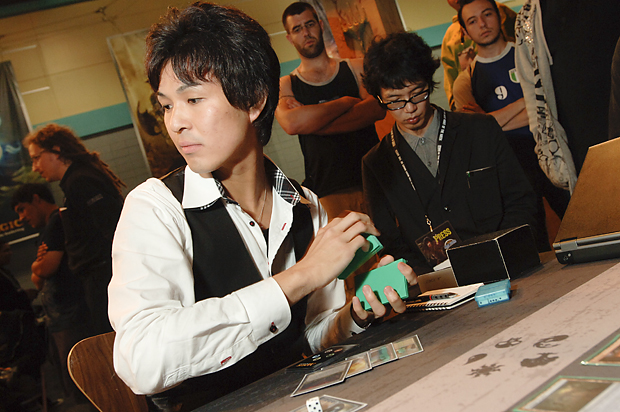 The dapper Ikawa keeps his eyes on the prize (figuratively).

A Jace, the Mind Sculptor from Paulo was Canceled by Yoshihiko while the Cobra continued attacking. Oracle of Mul Daya resolved successfully, however, and went to town exploding Damo da Rosa's land drops. Down to two cards in hand, it looked like Ikawa was out of gas to try to keep up.

Paulo Vitor put his opponent even further behind on card advantage, casting a Sphinx of Lost Truths with kicker. His Lotus Cobra had done admirable work, dropping Yoshihiko to 11, but it died at the hands of a Gideon Jura's Assassinate ability. When Damo da Rosa's Sphinx was followed up with Jace and a kicked Goblin Ruinblaster, it was Yoshihiko's turn to concede, and the players headed off to a rubber game.

In a repeat of the opening of the second game, both players were forced to mulligan for the final duel of the match. Content with six, the players got underway but to a slow start. Neither cast any relevant creatures or permanents over the first few turns, with a 0/4 Wall of Omens from Yoshihiko Ikawa looking decidedly lonely on a battlefield otherwise full of lands.

Yoshihiko tapped out to cast a Sphinx of Lost Truths unkicked, but his opponent used Deprive to counter. With Ikawa tapped out, Paulo cast an Oracle of Mul Daya and dropped an extra land for the turn. Journey to Nowhere took care of the 2/2, but Paulo was able to land a Sphinx of his own, also unkicked. The 3/5 began working on Yoshihiko's life total while Damo da Rosa managed to reload on Oracle of Mul Daya, successfully casting a second copy of the creature.

With his mana base supercharged thanks to the Oracle, Paulo was able to come up with enough mana to start attacking with Raging Ravine. Alongside his Sphinx, the two made a formidable pair and soon had Yoshihiko at just 12 life. Trying to hold on in the match, Ikawa cast Gideon Jura to Fog some attacks. His opponent was having none of it, casting Deprive to counter. Neither offered any hint they were surprised when Yoshihiko allowed the counter to resolve despite having counter mana of his own up. 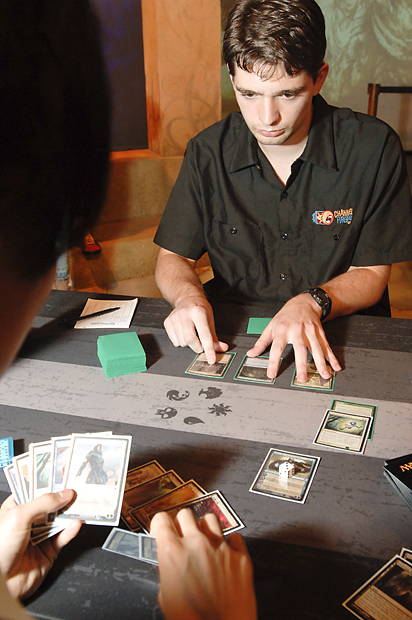 Paulo is at the ready.

A second Gideon from Ikawa did resolve, and Assassinated the Sphinx. He then cast Journey to Nowhere to solve his Oracle of Mul Daya problem and passed the turn. He knew his opponent was going to draw a Comet Storm for his turn thanks to a reveal from the Oracle before it was exiled, and that meant he needed to do some math. If he didn't have a counterspell of some type in hand, he would die to the burn spell provided Paulo had access to at least one land. At 9 life, Yoshihiko's time in the feature match arena was perilously close to ending.

Paulo drew for the turn and dropped a land to the table. He calculatingly tapped each of his mana sources, then revealed the Comet Storm. Yoshihiko tapped his remaining untapped Island and revealed ... Arid Mesa.

"You win," the Japanese player said with a smile.

3 Deprive 3 Cancel 2 Into the Roil