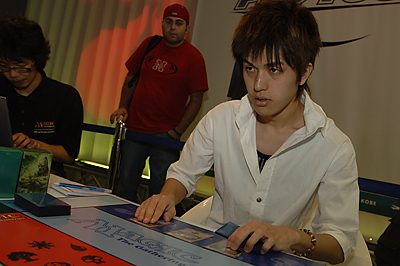 Kenji Tsumura was cool and confident heading into the final round.

reigning Player of the Year found himself with the wall pressed firmly against his back from his first game on Saturday morning. After narrowly making it into Day Two at the end of six rounds of play yesterday, Kenji picked up the dreaded third loss during the seventh round. Round 8 commenced on Saturday, and he had no losses to give if he wanted to reach the Top 8 for the fourth time in his young career.

Things started off well for him, and we caught up with him in a Feature Match early Saturday after he had rattled off three straight wins. He had not stopped winning by the time he reentered the Feature Match area for the fifteenth and final round of Swiss play. Things had exactly followed the game plan that Kenji drew up in the proverbial locker room before he took the proverbial field this morning: Win and in. But he would need to get through Norway's Thomas Gundersen to do it.

Gundersen has been playing Magic for eleven years, or as he puts it, "longer than this guy has been alive." After a couple of solid money finishes over the years - including a Top 16 finish in Prague - Thomas was hoping that this would be the event where he finally broke through into Sunday. If you are going to have a breakthrough event it may as well come against one of the game's brightest stars, amiright?

Thomas led off and had no plays for two turns while Kenji suspended Errant Ephemeron. Thomas flashed out Scryb Ranger at the end of Kenji's turn and nibbled away at the Japanese player's life total. Kenji patiently awaited his big flier and sent a Corpulent Corpse to the suspend zone to join it.

Thomas continued to nibble and played Gemhide Sliver. Kenji felt pretty comfortable hiding behind his Tolarian Sentinel and taking a paltry one from the pro-blue Ranger until Thomas added Might Sliver to the board. Kenji had one of the finest blue answers Time Spiral has to offer against a pro-blue flier and some busty Slivers - Ixidron. 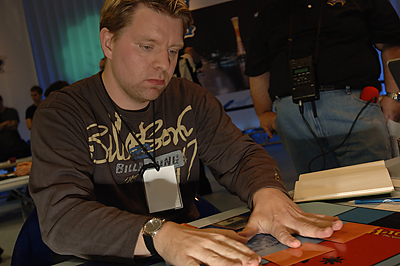 Thomas Gundersen hoped to break through to Sunday.

Thomas swung with all three face-downs. Kenji blocked two with Ix and his face-down Sentinel. Thomas trampled over the face-up guy with Strength in Numbers and added Greenseeker. Kenji's Ephemeron finally arrived and was joined by a Deepwalker, but he had no attacks.

After Thomas passed with no play, Kenji sent in Deepwalker - and pumped the **** out of it when Thomas chose not to block. Bonesplitter Sliver did little to hold down the board for Gundersen as the Corpulent Corpse showed up. Kenji was able to attack with it and the 4/4 flier to drop Gundersen to 6.

Gundersen did some math and decided to Greenskeeper on upkeep. He was trying to figure out if a Tromp the Domains (which he still needed to draw in this equation) needed the extra body to be lethal or if he needed the extra deck thinning to draw the Tromp. He settled on the latter play but just drew more land.

Thomas led off with Spinnneret Sliver, which ate Kenji's Withered Wretch. He made another after combat. Kenji offered another trade - this time with a morph - but a sideboarded Viashino Bladescout first struck the face-down Trickster.

Tolarian Sentinel was the next offering from the PoY. but it had to step aside and let the Spinneret Sliver get in for four when Thomas played Bonesplitter Sliver. Kenji tried to block again - this time with a Basal Sliver - but one more Bladescout forced Kenji to save his guy with the Sentinel, and he replayed it on his turn.

With an army of four guys, Gundersen swung with everyone. He had the Strength in Numbers, and they were quickly onto the rubber game.

Kenji took a deep meditative breath before looking at his hand. He looked crisp and calm as he fanned through his opening seven and said the one word you would not want to hear facing down Kenji Tsumura in Game 3 of a match with a Top 8 berth on the line: "Keep."

He led off with Looter il-Kor. Kenji may have looked crisp and calm at the start of the game but as he waited to see Gundersen's turn-two play he betrayed a bit of the nerves he was feeling, leaning from his seat over the table. The Looter got in and found a card - a soon-suspended Errant Ephemeron. Gundersen flashed out Scryb Ranger and untapped to play Mogg War Marshal. 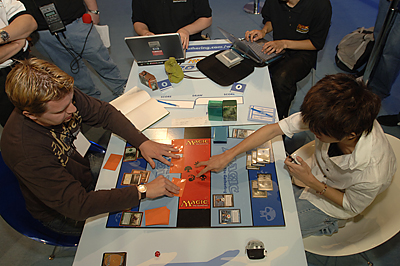 Pit Keeper was up next for Kenji with the Ephemeron looming. Kenji traded his little guy for half of the Mogg. Bonesplitter Sliver came down for Gundersen, while the Looter kept pecking away. Kenji dumped Corpulent Corpse and Eddy'd the Sliver on top of Gundersen's deck, but the Norwegian player made up for lost turns by powering out the Sliver through a sideboarded Coal Stoker. Kenji passed the turn with only a 1-point nibble from his shadow dude to show for it.

Gundersen attacked in, and Kenji ambushed the Coal Stoker with Teferi. Gundersen seemed unfazed. He played Cockatrice and "untapped" a land with the Ranger. Kenji madnessed out Gorgon Recluse with his Looter, then traded the Errant Ephemeron for the green flier. Kenji flashed out a morph at the end of the turn.

Gundersen decided to make his move and tapped out for Tromp the Domains with three basic land types in play. Kenji had Tendrils of Corruption, which, in addition to boosting him up to 11, allowed him to take out the Bonesplitter Sliver - and neuter the Spinneret. Combat became a less palatable proposition for Gundersen, but he finally just shrugged and sent the remaining three creatures into the red zone. He had 13 points of trampling creatures, while Kenji had considerably less to work with in the toughness department. When the dust settled Kenji had Teferi and Looter, Gundersen had Spinneret Sliver and Scryb Ranger, and Kenji was at 5.

Kenji ripped a Fathom Seer - and ultimately two new cards - and attacked for one with Looter. Gundersen went to peck away for one more point with his Ranger, but Kenji flashed out Basal Sliver, which could block the Ranger thanks to the Spinneret Sliver on the other side of the table. Gundersen slumped and played Sporesower Thallid.

Kenji flashed out Viscid Deepwalker. While his Basal Sliver play had been quite exciting, he was not yet done getting max value out of the black Sliver. Kenji attacked Gundersen down to 8 and then finished him off with a Phthisis that he was able to pay for with the sacrifice ability of the Basal Sliver.

Gundersen extended his hand and the room exploded. Kenji Tsumura had just completed an improbable run that began last year when all of his individual Top 8 finishes came in Constructed formats. That was enough to earn him the Player of the Year title, but it was not enough to satisfy him. Kenji vowed to become a better Limited player and had Kobe circled on his calendar for some validation.

After getting off to a 4-3, he rattled off eight straight wins and earned the fourth Top 8 berth of his career. His feat crackled through the room as spectators were drawn to the commotion in the feature match area and players from all over the world offered Kenji their congratulations.