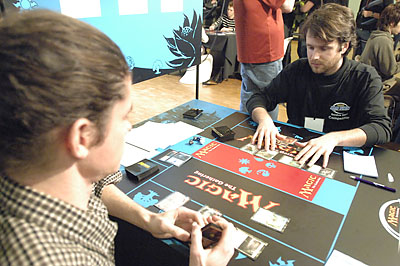 Neither Herold nor Hron had tasted the Top 8 of a Pro Tour before.he final round before the cut to the Top 8, this match pits Mike Hron of the U.S. against Jim Herold of Germany. At 10-2-1, Herold boasts the better record of the two, but was hoping for a pairing against one of the other players looking for a draw. While a loss might still get him into the final day of play, a draw or win would guarantee his slot. For Hron things were more difficult, as he'd need to win here to even have the chance.

Fortunately for both of them, as this match started word came that all of the other players had actually decided to play their final matches. With nobody else taking intentional draws this round, it meant Hron winning might be even more likely for both to still make it in, so the atmosphere was definitely intense as both players psychologically rolled up their sleeves and got down to business.

Not only have these two not played each other earlier in the weekend, they've never played each other ever. With these decks specifically, Hron is 1-1 so far, and Herold won his first match and then took an intentional draw last round with Kenji.

Winning the die roll, Herold chose to go first, a decision that's been universal in my experience so far this weekend, at least for Game 1. Going second, Hron was a bit slow with second-turn Dreamscape Artist followed by nothing turn three except using the Artist. On the other side of the table, Herold raced out onto the table with Durkwood Baloth (suspended, of course), Mire Boa, Yavimaya Dryad, Spinneret Sliver, and then an end-of-turn Sulfur Elemental, too. Watching all this, and having added only a Keldon Marauder for his own side during the whole thing, Hron shook his head with a laugh.

Herold was all smiles. "Yes, it really is. As long as the bad luck is just getting paired down with someone who couldn't draw, I think I'm in pretty good shape so far."

Down to 10 life in very short order, Hron tried to get back into it with a Torchling, plus Grapeshot on a newly summoned Spined Sliver that threatened to complicate his already difficult defensive position. In came the Durkwood Baloth, and an Evolution Charm fetched the Spined Sliver back from the dead. Herold played the Sliver back into the fray and swung with his beaters. Dreamscape Artist chumped the Baloth, Torchling killed the Dryad, and Herold dropped to 6.

The next turn, you could see the gears clicking into place for Hron.

Herold sent in his whole team again. The Torchling untapped and stepped in front of the Baloth, not having enough mana to get its toughness all the way up to 6 after getting its power high enough to kill the Baloth. With his opponent now down to 2 life, Herold added a Thallid Germinator to his already overwhelming offense. Mike drew his next card and conceded immediately, out of creatures and out of life.

This time it was Goblin Skycutter for Herold against a Spiketail Drakeling for Hron. Both creatures traded, and next up was… nothing. Herold seemed about to play something, but then just passed the turn. Hron passed it right back after laying land number four, but Herold had an end-of-turn Sulfur Elemental to press the attack, joined by a hasty Uktabi Drake on his own turn. He sent in for 5 points of damage, none of which had been there on his previous turn. However, Hron had a Sulfurous Blast to wipe the board. Having none of that, Herold slapped a Strength in Numbers on the Sulfur Elemental, making it 5 damage after all and saving the Elemental from the Blast in the process, making it Hron 13, Herold 18.

Untapping, Hron just laid land number five and immediately passed it right back. Sulfur Elemental yet again came across, and this time it was Teferi springing forth from the bushes or Æther or something, sending the Elemental to the bin. Shaking his head a bit, Herold had to be content with a Mire Boa. Things went from bad to worse at that point, as Hron added a Griffin Guide to the legend with the help of a Chromatic Star. The Boa cracked back, making it Hron 13, Herold 11, and then out came Pyrohemia.

Teferi bashed in again, and the turn was passed. Having learned exactly nothing from its predecessors, Mire Boa tried to attack Mike Hron, and for the third attack phase in a row something bad happened to the attacking team. This time it was a flashed Keldon Marauders powered out with the special Teferi gas. Herold's mana was so busy he couldn't even regenerate the Boa, needing to let it go so he had enough to tap out for Firemaw Kavu. That killed the Marauder, putting Herold down to 6, but on the end of his turn a morph sprang out too. Hron turned it upside-up after the untap, revealing it to be a Coral Trickster and tapping down Herold's only blocker. Between the fish and the legend, Hron had lethal damage, so that was that. Shaken at least a little bit by this brutal game, Herold seemed lost a bit deeper in his thoughts as they got ready for Game 3.

Coincidentally, I happened to watch both of these guys draft these decks, since we were recording the whole thing for the draft viewer, so I happen to know that Herold first-picked that Firemaw Kavu. Unfortunately for him, at least this game, it was Teferi that he passed to get it.

After two grueling days of play, it was time for the final game of the elimination rounds. Hron would be playing second, looking to break serve somehow, and then hoping the win would be enough to squeak into the Top 8 on tie-breaks. Meanwhile, Herold controlled his own destiny, as a win here for him would guarantee the slot, while a loss might still get in. With a lot of on the line, it was time to see whose tournament was ending tonight.

Against a reasonable draw, Hron's slower, more powerful late-game deck needed to find a way to establish a strong enough defense as early as possible. And for this one he did it with one of the best early defenses I've seen all weekend. Facing a Spinneret Sliver on his second turn, Hron went with the oft-maligned Keldon Marauder for his own second turn. Unable to attack into the 3/3, Herold had to pass the turn, settling for a suspended Baloth.

On Hron's third turn, the Marauder sent right in, which had to be a bad sign for Herold. After the attack, Hron played out a Chromatic Star, popped it for blue, and then played a Dream Stalker, saving the Marauder from its vanishing death, getting a 1/5 into play on turn three against red-green aggro, and dropping his opponent to 15 while still enjoying a luxurious total of 20 on his own end. Who's the aggressive deck here?

In came the Sliver, and fortunately for Herold a Rift Bolt was available to get the giant blocker out of the way. That was only the good news, though. The bad news was that now he was behind on the race, and he didn't have a fourth land to get his attack back on track. Passing the turn back, a morph joined the American's table, which flipped up into Coral Trickster on Herold's upkeep, tapping his only forest and getting basically another Time Walk against the aggro deck as Herold had to pass it back.

The Merfolk came in, the Marauder was re-cast (knocking Herold down to 12), and finally a Dreamscape Artist joined the board. Falling increasingly behind, Herold had to settle for Conflagrate for 1 on the Dreamscape Artist. Next came Griffin Guide on the Merfolk for Hron, sending it on the attack along with the Marauder! Herold looked helpless. Tapped out, and with two time counters still left on a Baloth that probably felt like it would be arriving an eternity from now, Herold really didn't have a good play to choose from. Able to chump block either, both of which were bad, in the end he decided to go with just taking it all, dropping to 5. Untapping, he leaned all the way back in his chair, thought a long time, then leaned forward with a pained expression, trying to figure some way out. Tapping for

, he discarded three cards to flashback Conflagrate, killing the Merfolk, then used the last two mana to play Mire Boa.

From here the Marauders vanished, dropping Herold to 4. Stingscourger bounced the Sliver, and the Griffin token served an attack to drop Herold down to 2. Hron added a Spiketail Drakeling to the board for good measure, surely locking up the win given the board and his opponent's lack of mana. Next turn Herold didn't have any way to stop both fliers, and that was that. It was the end of a dominating game, one which saw Hron finish with the same life total he started at while holding a dragon and Sulfurous Blast in hand, too!

It turned out to be a happy ending for both players. As I finished writing this, Randy Buehler announced the Top 8, and in the end both Hron and Herold made it in on tie-breaks, getting through what turned out to be a 5-way tie for 5th! Based on what I've seen from both of them so far this weekend, I'm greatly looking forward to seeing both of these competitors tomorrow. That goes double if they get paired against each other for a grudge match!