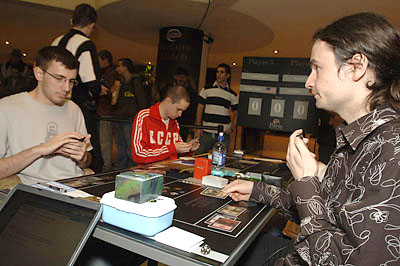 this match-up, Andersen is playing a straight-forward red-green beatdown deck while Lovett's sporting a four-color special that looks like a Rock deck splashing white for Loxodon Hierarch and blue for Gifts Ungiven.

Lovett was first this game and began with a fetched-up Swamp. While shuffling his deck after the fetch Andersen mused, "Wild Guess. Cabal Therapy me?"

"Maybe. You're not the first person to ask that."

The Swamp was tapped and indeed it was Cabal Therapy, naming Troll Ascetic. "No hit" Andersen said, laying out a hand of 4 lands, Sudden Shock, Kird Ape, and Call of the Herd. For his own turn he went with fetching up a Mountain and playing Kird Ape.

Next was Golgari Rot Farm for Lovett, while Andersen fetched up a Forest for his monkey to attack for 2, followed by Wild Mongrel. Lovett had a Pernicious Deed but was dropping quickly, eating a Sudden Shock to the face and then another attack before he could get the Deed off. Once the board was cleared Andersen played his Call of the Herd, getting the last known spell out of his hand before Lovett could flash back his Therapy, and keeping up the pressure. 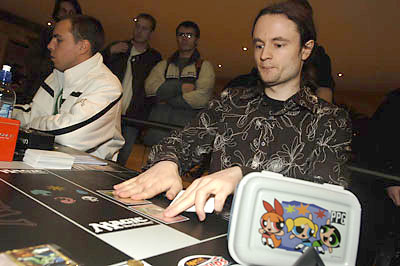 Andersen lights up the red zone.

Lovett had Plow Under, but dropped to 6. On his next turn he looked like he might be climbing back into the game with Birds of Paradise and Eternal Witness, but surprisingly he got the Plow Under back, not the Deed. I couldn't see his hand, so I figured that must mean he had some removal for his next turn and wanted to use that plus the Plow Under to push Andersen back. However, Andersen pointed a Volcanic Eruption at the board, making it one to the Bird, one to the Witness, and 2 to the face plus a smash from the Elephant, dropping Lovett to 1 in a brutal turn. Lovett drew his card and immediately conceded, wincing. "Maybe I should have brought back the Deed?"

Game 1 was quick, but this one was even quicker. That is, it was quicker if you don't count all the shuffling Andersen did as he went through the excruciating process of taking mulligans all the way down to four cards. Given such a meager starting hand he did surprisingly well, burning a couple Birds and playing a Kird Ape, but he was stuck on one land with a 1/1 monkey while his opponent began a steady stream of efficient creatures, removal, and card advantage. Playing a third fetch land and dropping himself to 17, Lovett quipped "I'm doing all your work for you." Andersen replied evenly, "Good, because I'm not going to do one single damage to you this game."

Lovett did what he could, but the deciding turn came when Andersen had to go for a gang block on a Hierarch, which was broken up by a Putrefy that basically sent both creatures to the graveyard. Andersen again tried to rebuild with what little land he had, but this time it was a Deed that wiped out his team, allowing Lovett's bigger beaters to continue in unmolested.

In the end, Andersen was right, he never did manage to get a damage through. To his credit though, he didn't concede until he was actually, completely dead. At least three times at this event so far I've seen players concede situations that were certainly bad, but not yet unwinnable. Losing isn't fun, but there's something important to be said for sticking out until the bitter end. As my mom used to say when asked why she'd never stop watching a sports game until it was all the way over, no matter how far her team was behind, "If you don't give yourself the chance to watch for that miracle comeback, you automatically never get to see it."

Again on the play but sporting what must have felt like a luxurious mass of cards compared to his previous game, this time Andersen had a much better start, ramping off a Llanowar Elves into Troll Ascetic. Lovett had a birds for his own first turn, but knew he'd have to scramble to deal with the problematic Troll. Playing a Cabal Therapy, he thought a bit and decided to go with Wild Mongrel, reasoning that his opponent could very well have one given the turn two Troll Ascetic. Andersen's hand was revealed to be a land, Char, and double Volcanic Eruption. Lovett leaned back, declaring for the whole amassed crowd, "I was thinking about naming Violent Eruption!" Andersen didn't look at ease, though, as Lovett could (and did) just sac his Birds and strip the two Eruptions from his hand.

Untapping, Lovett paused for effect after his attack and then slipped out a Wild Mongrel, which drew a good laugh from the crowd given the Therapy whiff just a half-turn previous, but the dog went down to Putrefy. Through all this, the Troll continued hammering in, with Lovett now down to 10 life and the clock starting to get low as well. He had a trump in Genesis, however, if he could just stay alive long enough to get full usage from the Incarnation. Genesis caught fire from Char and went to the graveyard, and Lovett dropped to 6.

From here the game swung wildly back and forth. Each turn Lovett had a delicate dance in deciding just how much mana to commit for Genesis while figuring out what to leave for what may be coming off the top of his deck. On a critical turn he decided he needed something big and skipped the Genesis draw - and ripped a Deed off the top, blowing it in the ensuing attack to clear everything but the Troll and buy another turn. Seeing the Deed off the top, a Lovett fan from the crowd cried out "Yes!" but Lovett, laughing, calmed him down. "No, I need a Loxodon!" Just holding off the Troll for now, Genesis kept coughing up the same doomed Sakura-Tribe Elder, getting his mana ready for the big comeback.

Almost dead on life, Lovett again went to the top of his deck and at last found the answer he'd been looking for. Though not a Hierarch, it was the next best thing in Living Wish, which got the lone Hierarch in his board. Without enough mana to cast it, however, and just the Elder to block the Troll and only 3 life left, he'd be pants-down for one measly, terrifying turn. At this point everyone in the room knew Andersen needed a burn spell. Gesturing to the last card in his hand, Lovett asked if he already had it. Andersen, deep in concentration, shook his head but pointed right at the top of his library, like Babe Ruth aiming his bat at the outfield fence. I swear you could feel the whole crowd holding its breath as Andersen drew his card and could only attack and then play a Wild Mongrel.

Lovett quickly got his Hierarch going, playing it out and saccing it whenever possible to bring it back with Genesis, getting back up to a much more comfortable 11 life. The problem at this point seemed to be that time was nearly out. Worse, Andersen finally managed to find a Tormod's Crypt, threatening Lovett's Genesis-powered control of the table.

Again the game went back and forth, this time with a new Genesis added to the table, meaning Andersen really wanted to wait on his Crypt to try and get both incarnations. Worse, time was really getting short at this point, and it seemed unlikely either player could put it away in time.

At this point time was called, and the players would have 5 more turns to play. Lovett sent his whole team in, and after combat and a post-combat Pernicious Deed to finally off the Troll (Andersen didn't have enough mana left to save it), there was just a Hierarch left in play and a new Birds for Lovett, with Andersen at 7 and two more turns for Lovett. Going to the top of deck and now clearly fighting just for a draw, Andersen found a rather nervous Grim Lavamancer. Lovett though hard on his next turn, weighing his options, and eventually went with a Gifts Ungiven for Vindicate, Loxodon Hierarch, Putrefy, and Ravenous Baloth, trying to put the whole thing away. 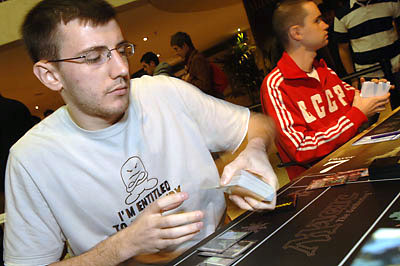 Lovett doesn't get lost in the shuffle.

Figuring out his best chances to pull out the draw by living one extra turn, Andersen opted for giving his opponent the fatties, denying the two removal spells in the process. The Hierarch ate the Lavamancer and was joined by a second Hierarch, all the mana Lovett had left for his next-to-last turn. And so we were back to Andersen needing a topdeck again, this time to survive one last turn and pull out a draw. Peeling off his final card, it turned out to be a Call of the Herd! With 7 life left, Lovett would need a removal spell to get both Hierarchs through for lethal damage.

The crowd was on edge at this point, with all other matches completed and everybody waiting to see how this one would turn out. Fortunately for Lovett, he had an Eternal Witness to put it away, returning Putrefy and smashing in for a lethal 8 damage on the final turn possible. It was an exciting finish to a grueling, complicated match, and both players looked wiped out from the battle. With three more rounds to go, though, there's no rest to be had yet!