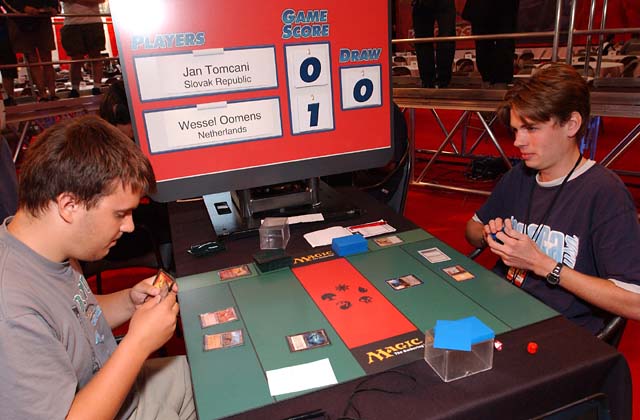 Today's portion of Worlds is interesting, because Extended hasn't been a relevant format for quite some time. Over the years, certain innovations have been introduced, and the Magic community as a whole has yet to see what these changes mean for the Extended metagame. Wessel Oomens's deck is a perfect example. It uses the old reliable strategy of white weenie, using Shadow creatures and Cursed Scroll. Plus, it has some modern cards, such as Ramosian Sergeant, Steadfast Guard and Meddling Mage. Shadow and Rebels may be two different white weenie mechanics from two different eras, but there's no reason why they can't be used together.

Tomcani is running Sligh, but with a few updates. The most notable of these is Urza's Rage, which easily makes the cut in an environment heavy with blue decks.

Tomcani won the roll and played first, casting a first turn Jackal Pup. It attacked on the following turn, but Oomens removed it from the game with Swords to Plowshares. A second Pup followed. Oomens played a Ramosian Sergeant, but it fell to Shock. Jackal Pup attacked, but Oomens had yet another Swords to Plowshares. Tomcani summoned Mogg Fanatic, and ended his turn. Oomens built up his side of the board with Steadfast Guard. This was enough to hold back Tomcani's attack, as he played a mountain and ended his turn. Steadfast Guard came through for two damage, and Meddling Mage was summoned, naming Fireblast. Oomens also played Soltari Priest.

The Guard and Priest attacked, and the Mogg Fanatic blocked and shot the Guard to kill it off. The Priest got through for two points of damage, and Oomens played Cursed Scroll. A second Scroll came out on the next turn, and Tomcani used Wasteland to kill off Tundra, Oomens's only blue source. He also played Ball Lightning, which came through for six damage. Still, the Scroll and Priest were hard at work dealing four points of damage a turn. They eventually finished up the job, giving Oomens the first game. 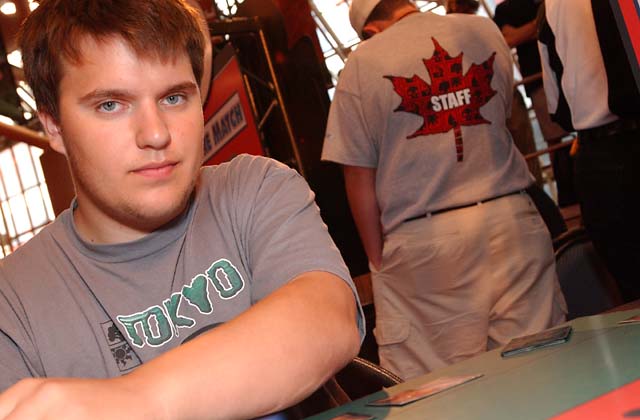 Tomcani went first yet again, and played Ghitu Encampment. Oomens summoned a first turn Ramosian Sergeant. Tomcani played Cursed Scroll and Mogg Fanatic on the next turn and said go, unthreatened by the Sergeant that could not be activated for another turn. Oomens knew his Sergeant wasn't going to survive, and attacked. Mogg Fanatic blocked, and shot Oomens for one after damage went on the stack. Meddling Mage was then played, naming Incinerate. Tomcani drew and ended his turn, missing his third land drop.

The Meddling Mage now attacked for two, and was joined by Steadfast Guard, as Oomens continued to apply more pressure on his mana screwed opponent. Seal of Fire took out the Steadfast Guard, while Oomens used a Brainstorm. A second Steadfast Guard, Ramosian Sergeant and Cursed Scroll all came out at once, making Tomcani's situation even worse. If it was any consolation, Tomcani drew the third land he needed, but had already fallen behind. Incinerate killed off the Sergeant, but the Guards still served for four.

Oomens used Tithe to grab some lands, and now had one card in hand, which meant his Scroll would be firing away as well. Tomcani destroyed it with Pillage, and Oomens activated it to deal damage before it headed to the graveyard. Mother of Runes was then cast, and Tomcani was running out of time. He played a second Cursed Scroll and Incinerated a Guard, but went down to four life points when the other attacked. Ball Lightning was summoned and attacked, and Oomens blocked it with the Guard, which was given protection of red from the Mother of Runes. Oomens took four trample damage.

The Guard attacked once again, bringing Tomcani down to two life points. Meddling Mage was played, naming Fireblast. Tomcani untapped and targeted Mother or Runes with Cursed Scroll. Oomens responded by giving his Meddling Mage protection from red, and it died to Incinerate. This left Oomens with Steadfast Guard, which Tomcani had to kill with Steadfast Guard in order to stay alive. Tomcani was at two, but had two Cursed Scrolls running, as well as a Ghitu Encampment that could be used at any time. Oomens slowly lost two life with every turn, and drew a Bottle Gnomes. Tomcani targeted it with Urza's Rage, and Oomens sacrificed it in response to gain three life. Oomens was still looking to draw an answer, but instead drew his fourth Tithe of the game. He reacted with a word that cannot be reprinted on this family oriented website. At this point the end was inevitable, as Cursed Scroll eventually went all the way, with some help from various burn spells.

Tomcani seemed relieved to win a game that was so close, and commented, "That's the first game I've won today." 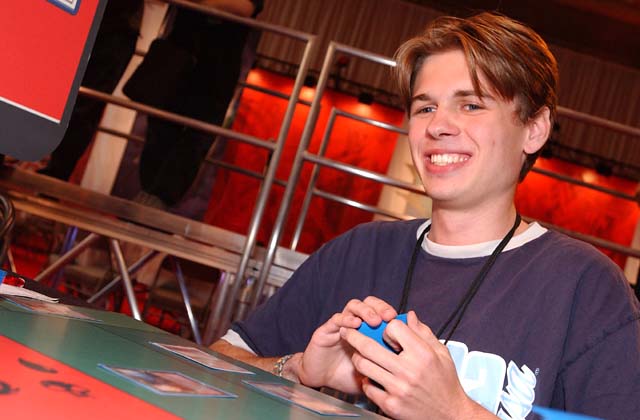 Oomens mulliganed his opening hand, and Tomcani did the same. Tomcani mulliganed the following hand, going down to five cards. Oomens opened with Ramosian Sergeant, while Tomcani played Mogg Fanatic. The Fanatic attacked, and was sacrificed to kill off the Sergeant before Oomens could get to three lands. Tomcani then played two Cursed Scrolls, while Oomens cast two Tithes on end step. Steadfast Guard came out, and a Mogg Fanatic was summoned, and eliminated with Swords to Plowshares. The Guard died to Shock, and Tomcani played Bottle Gnomes, while Oomens played his own Gnomes.

Tomcani then summoned Viashino Sandstalker, which was handled with Swords to Plowshares. At this point, parity had been achieved. Creatures had traded with creatures or removal spells on both sides of the table, leaving both players' hands with very few cards. The difference maker here would be Tomcani's Cursed Scrolls. Oomens tried to keep up by playing multiple threats in one turn, but the Scroll did its job and took them out one by one, before being used to deal damage directly to Oomens. However, Oomens played a Scroll of his own, and the race was now on. Each player had a Scroll going to work and a Bottle Gnomes.

However, once Tomcani got to six lands, he would be able to use both of his Scrolls to deal four damage a turn, while Oomens dealt only two. Tomcani tapped on his deck and was not happy with not drawing a land, and played another Sandstalker, which died to the Scroll. Oomens then played Seal of Cleansing, taking out Tomcani's extra Scroll. A second Seal followed, and Tomcani was now left with no Scrolls in play. This advantage was enough to carry Oomens to victory.