Round 15: Jelly Got Back 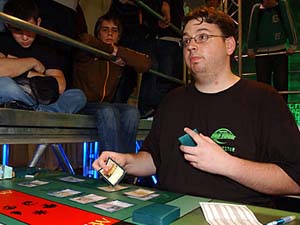 Scott-Vargas set up an imposing board.

was a great deal of discussion as the players were sitting down about the permutations of drawing versus playing this one out. Tomi Walamies was under the impression that a draw between the two would probably leave him in 8th place and put Luis Scott-Vargas in 9th - not an ideal situation, but it would at least guarantee a lot of prize money. A loss would drop one of them to 12th or 13th place, but both men seemed much more interested in the glory of a Top 8 appearance than pedestrian concerns like locking up thousands of dollars in prize money.

Walamies had a slow start in Game 1, making no plays before turn 4, while Scott-Vargas played Inner-Chamber Guard, Moonfolk Illusionist, and Honden of Cleansing Fire, then followed that with the very impressive Kiri-Onna, bouncing Walamies's fresh Azami back to his hand.

Walamies replayed the Legendary creature but lost it the next turn to Kagemaro's Clutch. Tomi cast Floating Dream Zubera and Matsu-Tribe Sniper on the next turn, trying to shut down Scott-Vargas's air force while further gumming up the board. Luis was now gaining four life a turn, two from the Honden, two from Ghost-Lit Redeemer, and the players settled in for a lengthy match.

Luis's deck decided to stop coughing up plays for him while Walamies gradually went on the offensive; at first just keeping life total parity, but soon whittling 32 down to 28, and then 24. Shimmering Glasskite followed by a Kiri-Onna reprise bouncing Kami of the Tended Garden further complicated the board.

While Tomi was trying to fight the ground war, Luis's Glasskite found his aerial path unobstructed and dropped the Finn to 10. Walamies found a Glasskite of his own, but Reciprocate on his Kami of the Tended Garden took the heftiest of his beaters and removed them from the game, and then a second Glasskite from Luis drew a flag from the ref for piling on. Soon Luis's life was up to 34.

Murmurs from Beyond splicing Consuming Vortex targeting one of Luis's Glasskites fizzled when Moonlit Strider stepped in to protect it, but that was just part of Tomi's brilliance, as he used that play to set up a victory down the line. Walamies doggedly continued his attacking and Scott-Vargas's life total began to hover at 43. Freed From the Real turned Tomi's Matsu-Tribe Sniper into a mini-Hurricane, wrecking Luis's air force and posing some real problems for his defense as well. With Luis's pressure dissipated, now it became a question of whether Tomi could kill Luis before he ran out of cards in his deck.

Scott-Vargas cast Choice of Damnations and Walamies named seven. Luis thought about it for a moment and then told Tomi to sacrifice down to seven permanents instead of losing seven life, effectively earning a fifteen-for-one. The game again stalled as Scott-Vargas simply gained life, waiting for Walamies to draw the rest of his deck. However, Tomi had a plan.

With two cards left in his deck, a Hinder in his hand, and a flipped Callow Jushi, Tomi cast Tomorrow, Azami's Familiar - a card that, when in play, meant he could not get decked. Scott-Vargas apparently had a plan of his own and started taking massive amounts of mana burn every turn for an as yet unknown reason. He then waited until Walamies was down to zero cards in his library and then cast a Teardrop Kami to bounce his Kiri-Onna and then recast Kiri-Onna targeting Tomorrow, shipping it back to the Finn's hand.

During Walamies's own upkeep, Tomi put Consuming Vortex on the stack and then Hindered it, putting the card on the top of his completely empty library so that he could draw it and not die. The crowd erupted with applause and Scott-Vargas merely nodded, conceding the nice play and dying on his upkeep because he too had no cards to draw. 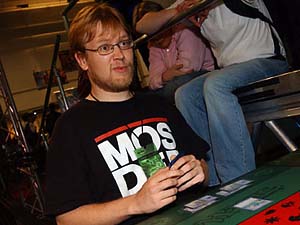 Walamies opened up the beatdown in Game 2.

Tomi's first play for Game 2 was a Genju of the Cedars on his Forest, followed by a Callow Jushi on turn three. The Genju was disenchanted by Terashi's Grasp as Scott-Vargas hit his three-color Magic Online manabase in stride. The Jushi traded with Kitsune Healer, and Kagemaro's Clutch took down a fresh Azami from Walamies, but that just indicated it was time to start swinging with fat, as Tomi cast Scaled Hulk, Kami of the Tended Garden and Nightsoil Kami on successive turns.

The man the Finns call Jelly (Yay-leh) is back in the Top 8!

At the end of the match, Vargas revealed that he was mana-burning in order to set up a Reverse the Sands against Tomi, but none of the observers were quite certain how he would have been able to attack for the win at any point at the end of Game 1.