Round 15: Jerry Freedman vs. Philip Freneau

This is it. Fourteen rounds, two days and countless stories later, these two players meet in the final round of Swiss with Top 8 on the line. Freedman is using black-green-red, while Freneau is with blue-red. Despite the fact that mistakes here would be the most costly, both players kept a brisk pace of play. 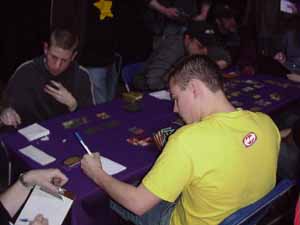 Mistform Dreamer followed by Mistform Wall by Freneau set the pace of the match. With the Dreamer racing through the air, Freedman played a Noxious Ghoul to clip its wings. Glintwing Invoker came to replace the Dreamer, although it would be quite some time before the Invoker would reach its full power. The Ghoul attacked, coaxing the Wall to block, but Freneau wouldn’t bite. That left Freedman’s mana open to play a Symbiotic Beast, which was enough to take down the Wall. Things were starting to go downhill for Freneau. Lapsing into thought, he considered his options, eventually settling keeping Freedman in the dark, with a morph creature, although one could smell an Echo Tracer lying beneath. Not to be outdone, Freedman made a morph of his own, and sent the crew in. The Invoker and Mistform Wall double-blocked the Noxious Ghoul in case of tricks like Primal Boost. Freedman flipped his morph to show Patron of the Wild, and Freneau flipped over Echo Tracer.

Maybe things were more predictable than people thought they were.

With the tempo advantage secured, Freneau went ahead to try and ride it to victory, expanding his forces with a Skirk Outrider and a Riptide Biologist. The Outrider was sure to be a threat, since the Mistform Wall could coax the Outrider to grow large enough to take down the Symbiotic Beast. A Nantuko Husk from Freedman spelt trouble with a capital “T”. In the event of a Dirge of Dread, the Husk could easily eat up the remains of the Symbiotic Beast to get a sweet +10/+10. It was only a matter of time.

Freneau tapped seven and showed Macetail Hystrodon. He now sat at seven mana, and was one short of sending the Glintwing Invoker to the skies. Freedman swung with the Husk, and Freneau let the Wall take its full impact. His next trick involved bringing out a second Invoker- this time of the Flamewave species to make things more difficult, but still desperately lacked the eighth land to go with his Invoking duo.

Bear in mind that with a morph, a Noxious Ghoul and a Symbiotic Beast in play to accompany the Husk, the Husk was potentially 16/16. That was bad news indeed for Freneau, who stood at a deceptively high life total of thirteen.

The Husk swung yet again. This time, a newly summoned morph took one for the team. Finally, Freneau got his eighth land. The Glintwing Invoker took to the skies, knocking Freedman down to seven. Freneau controlled more than enough chump-blockers to stop the Husk from eating him down. One activation from the Flamewave Invoker and a Shock was all it took for Freneau to take the first game. 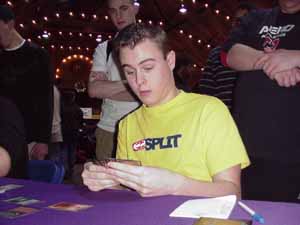 With the Top 8 seat slipping away from Freedman’s grasp, this was no time to joke around. An uneasy silence settled over the table. Neither player spoke a word in between games, and even the spectators followed suit in this silence. Choosing to play first, Freedman’s hand was not what he wanted- three Swamps and a fist of non-black spells (with the exception of a lone Thrashing Mudspawn). He sent it back to get a fresh new hand that was only slightly better. Peeling the third land that he needed for a Nantuko Husk, things started to look up. Then Freedman’s face fell when Freneau opened with a Sparksmith, but luckily did not have the second goblin to kill Freedman’s morph. Freneau cycled a Choking Tethers in an attempt to bring his Sparksmith online, while Freedman opted to race, playing out a second secret agent.

Freneau drew. No goblins for Freneau. He cycled a second Choking Tethers to try and get a second Goblin, but still got nothing. Freedman turned up the heat with a third morph creature. Finally, a Flamewave Invoker showed up, but was offed with a Solar Blast from Freedman, but not before the Sparksmith took out Freedman’s first morph creature- a Thrashing Mudspawn. Freneau made Face down creature #4, and now Freedman had to stop and think. Besides, it was starting to get difficult to keep track of all the morphs on the table.

Freedman attacked, and flipped over a second Thrashing Mudspawn. Freneau showed Echo Tracer. Land number seven gave Freneau Macetail Hystrodon, to which Freedman played out both Nantuko Husk and a morph, presumably the Thrashing Mudspawn that was sent back earlier. Echo Tracer went for it, and ran across the red zone alone. Freedman’s Gempalm Strider blocked the Tracer, and then the Husk ate the Strider after damage was on the stack.

Things weren’t so clear and cut however. In response to the Nantuko Husk’s ability, Freneau targeted the Husk with a Pinpoint Avalanche, forcing Freedman to sacrifice all his creatures just to keep the Husk alive. His next turn made it easy to understand why he valued the Husk’s life so highly- Symbiotic BeastThreatened a “Make-Your-Own 12/12” creature, which would have been lethal. Choosing to race, Freneau attacked with both a morphed-up Mistform Seaswift and his Hystrodon, knocking Freedman down to thirteen. Freneau sat at the unsteady life total of eleven, and the four Insect tokens that remained after Freneau’s Sparksmith tried to single-handedly take down the Husk was probably enough to ensure a lethal Husk. The race was on. Chump blockers against the skies.

Freedman played out a Wirewood Herald, Threatening to fetch a Symbiotic Elf to make things a little bit more interesting with the Husk. Freneau’s only response to that was to play out a second Macetail Hystrodon, Threatening the Husk with eight, full points of first-striking damage. That was obviously enough to deter an attack from Freedman, who then opted to sacrifice his Herald first, which fetched a Tribal Forcemage instead of the Symbiotic Elf. The situation still was not fantastic for Freneau, although the scales were slowly tipping. 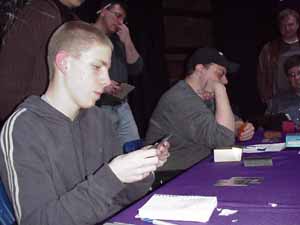 Freedman made a morph (Guess what), and sent everything in. The Hystrodons blocked an Insect and a Husk, to which the Forcemage was flipped over, giving all Insects +2/+2 and trample. I personally wonder why Freedman did not then sacrifice the Forcemage to the Nantuko Husk to put lethal damage on the stack, but I guess he felt that reducing Freneau down to one life was enough. Freneau sent in his Seaswift, knocking Freedman down to seven. The third Choking Tethers of the match bought Freneau an extra turn, but nothing came up. Choosing to save time, Freneau conceded the game, saying “Neither one of us wants a draw out of this.”

The clock showed just fifteen minutes left in the round.

This was it. For (most of) the marbles.

For a game as important as this, things went slowly on both sides, with nothing in play except for Freneau’s turn-three morph, that Freedman matched with one of his own (Surprised?). Seeking to buy tempo, Freneau offed Freedman’s morph (Spined Basher) with a Shock and swung for two. A second morph joined Freneau’s side, while all Freedman had was a solitary Husk.

It was pretty obvious that Freedman wasn’t very happy at his four black lands in play, with a grip that held numerous green and red cards. Noxious Ghoul provided temporary protection against the masked onslaught, but Pinpoint Avalanche cleared the way. Flipping over Echo Tracer got rid of the Husk temporarily, which Freedman replaced with a morph. Going for all-out tempo, Freneau cycled a Choking Tethers to tap the morph, then took the game, match, and Top 8 seat with a Macetail Hystrodon and an all-out attack.