Round 15: Jon Finkel vs. Gary Wise

Finkel may have designed Dying Shadowmage as his card this time around, but not even his self-deprecation can stop him this weekend. Suited up in a retro-Finkeltron haircut, it seems like some of that old spark has come back. A 2-4 start to the weekend, the result of a miserable 0-3 performance with Battle of Wits. Figuring his chance had passed, Finkel set out to play Battle in all constructed formats, buying it in the Auction and setting it up as his Standard deck. What he didn't count on was hitting 2-1 with it, then sweeping the Rochester draft. Suddenly, he was in contention for Top 2, and he was playing a deck he would describe as "horrible". He won his first two, and now a win would tie him for second place. If the breakers fall the right way, Jonny Magic could be the first player featured on two cards. Just the thought forced his features into his trademark winning smile. 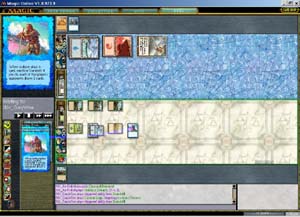 (click to open full-size in a new window)In his way is ex-Canadian, ex-Englishman Gary Wise. Sideboard Online's own Limited mouthpiece, Wise is best known for his set analysis and brash, outgoing attitude. Underneath all that bluster is a player who not only has some serious skills, but also cares about the game, its history and its culture. In fact, the enormity of his being voted into the Invitational never really hit home in previous years. Sure, he appreciated the opportunity, and thanked his fans for supporting him, but it never really dawned on him the amount of support he had in the public. Watching the Invitational room scroll by with countless lines "GO WISE! YOU R0X0R!" and "Do it for Canada, Gary!", his celebrity finally sunk in. Even with all that and just one match away from greatness, Wise maintained a light-hearted outlook. For him, the Invitational is a chance to game with the best with nothing on the line but good times.

After a quick "Good luck, Jon" and a sarcastic "Bad luck, Gary" they were underway. Wise brought rapid beatdown in the form of two Rootwallas and a Werebear before making a Standstill. Finkel had set up his hand and accelerated with Charcoal Diamond.

Wise passed his fourth turn, and Finkel calculated maximum damage. It was nowhere near enough. Finkel baited his four open mana with Insidious Dreams, discarding down to just land and Battle of Wits. Wise bit, and played Circular Logic. Now, he didn't wait until his Standstill trigger had resolved, so he gave Finkel three cards instead of taking them himself. It didn't much matter, with Finkel having the win in hand, but if Wise drew into a sequence of Careful Study, Careful Study, Centaur Garden, he would have been able to swing for the win with Battle on the Table.

As it was, Finkel played the enchantment, and won. Wise didn't even give him the satisfaction of loading the Battle trigger onto the stack.

Finkel kept Wise's beatdown sluggish thanks to a Smother on his turn-two Wild Mongrel. That left Wise with just lands in hand and a Mongoose on the table. A Ray of Revelation in the yard meant he'd need more than a Battle to take it, but he had plenty of time to set up. Wise drew Basking Rootwalla, increasing his clock fourfold.

Inspiration put Finkel up more cards. He fell to ten from Wise's assault. Wildfire undid his board, leaving him with Wonder and an unknown card in hand, and just one land in play. Finkel had three, a Diamond, and more in hand. He was short on action, though, and Wise had two Rays in the graveyard. He Complicated a pair of Werebears, getting up some cards. Psychatog gave him the go-ahead He struck. 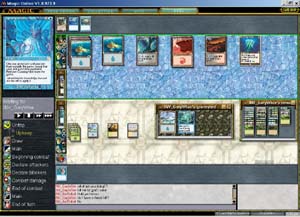 (click to open full-size in a new window)Insidious Dreams set up Concentrate and then Haunting Echoes. Finkel spent his Counterspell on Wonder, and then left Wise with just a single threat between deck and hand: Aquamoeba. A Mental Note turned over Chainer's Edict to take care of it, and now Finkel was in total control.

He slow-played it, a fact that agitated Wise. Cries of "Kill me already!" echoed through the halls. Finkel was not to be undone by some random draws on Wise's part. He spent turns stacking his deck with Counterspells before playing out his 'Tog. Not that it mattered. If worse truly came to worse, Finkel could turn off all his stops and wait for Gary to deck himself.

He eventually powered up the 'Tog with double Counterspell backup. Wise said "I choose decking", and Unsummoned the Psychatog, protecting his spell with a pair of Circular Logics. Mercifully, he sped up the process with a pair of Careful Studies.