Round 15: Jun Nobushita vs. Tadayoshi Komiya 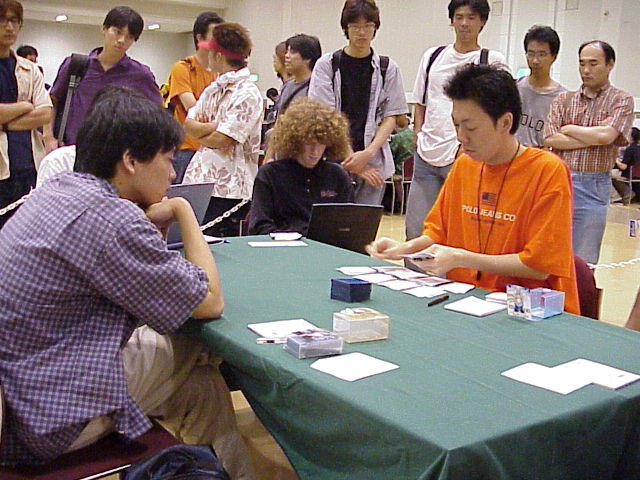 The always-expressive Jun Nobushita glowered his way to his Feature Match against former Japanese National Champion Tadayoshi Komiya, the "Blue Master". He earned this nickname after a number of high-profile finishes in blue-dominated environments. If blue is the color to beat, Komiya is a safe bet to win.

Nobushita stunted his mana growth early, dropping Treva's Ruins to make a Meddling Mage to stop Collective Restraint. His Goblin Legionnaires on the next turn met Evasive Action. Still, his Mage was relentless and Komiya was short on defense.

Komiya played Fact or Fiction and the result was a disappointing mess of cards. Two Fact or Fiction, mountain, Sunscape Familiar and Evasive Action. Nobushita put the mountain with one of the Fact or Fictions, in hopes of cutting off part of the Domain. He was successful, as Komiya took the other three cards.

Nobushita hit again, and Komiya played his newfound Fact or Fiction desperately. He was still without green mana. This time he got his wish, taking Elfhame Palace and forest over Collective Restraint, Global Ruin and Restock. He untapped and played Sunscape Familiar, hoping to stabilize at twelve.

Nobushita Raged the Familiar at end of turn. Komiya answered with a Harrow that let him play Dromar's Charm on the Mage. Nobushita made him pay, blitzing with Lightning Angel and making an Angelic Shield for backup. Komiya put out Collective Restraint, but had nothing to follow it up, and took a one-two punch from the Angel.

Komiya played Fact or Fiction, looking for a way out. He managed to get Sunscape Familiar, Fertile Ground and Dromar's Charm over a pair of Restraints. He played them all, Charming to gain life on Nobushita's next attack. 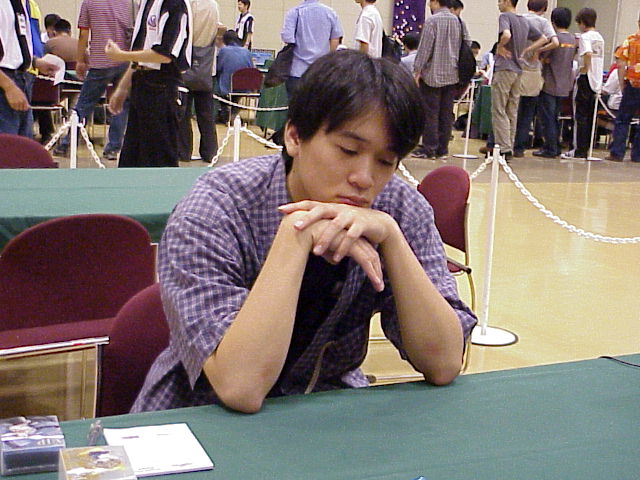 The time it bought was well worth it. He cast Global Ruin, and had Evasive Action for Nobushita's Absorb. This knocked Nobushita down to mountain and island. He topdecked plains and passed the turn. Komiya laid Legacy Weapon. Nobushita's deck continued to be kind, offering up Battlefield Forge and allowing him to knock Komiya to two.

With Komiya's Weapon now online, Nobushita had only one draw phase left. It was Shivan Reef, and he went to the head with Prophetic Bolt, taking the game with style.

Komiya mulliganed to start things off in game two, and grimaced at his one-land hand. He chose to keep, but was unhappy about it. He missed his second land drop. Nobushita had no early pressure, however, and let him peel into three more land.

Nobushita continued to pour on the pressure, making a Meddling Mage and Gainsaying a Gainsay to keep it. The Mage made sure Collective Restraint wouldn't be entering play any time soon. Komiya continued to bust out lands, Harrowing into a Fact or Fiction that gave him two lands and two Harrows over a Rakavolver.

He wasn't done yet. He played both Harrows, up to nine land in play, then played another Fact or Fiction. This gave him Questing Phelddagrif, Mystic Snake and Sunscape Familiar over two truly unfair Pernicious Deeds.

Nobushita was soon in dire straits. The Familiar smoothed the way for the hippo, and Mystic Snake took care of an interfering Absorb. Short on answers, Nobushita made a Lightning Angel and ran it into the Hippo to draw a card. He added a Meddling Mage to his team, this time taking care of Dromar's Charm.

Komiya swung for six with hippo and Snake, and then decided he needed another Phelddagrif. Nobushita was fast running out of time. He took two more single hippo hits, drawing counters instead of action. Komiya thought hard before sending both hippos to the air. The two cards Nobushita drew were no help at all, and he shuffled up for the next game. 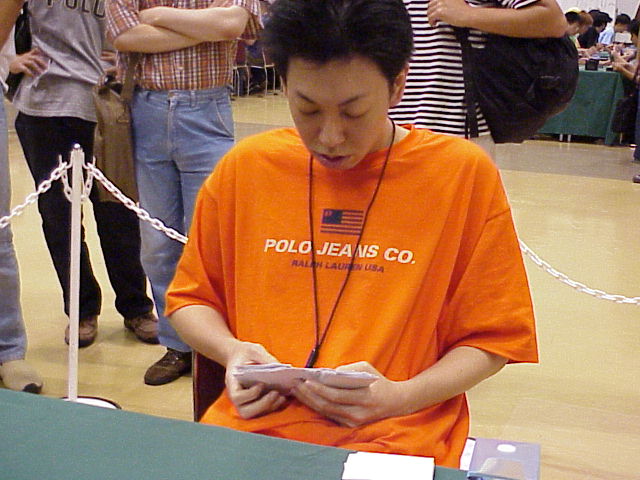 Nobushita was happy with his hand in game three. He'd gotten the coveted double-Legionnaire draw. Komiya stopped the rocking with Evasive Action, then untapped and Harrowed into Sunscape Familiar. Nobushita found a third Legionnaire and put it into play. He tried to Gainsay the mighty purple beatdown hippo, but Komiya also had the power of Gainsay.

Komiya's hippo stayed on defense, and Nobushita was hard-pressed to get damage in. He hit for four while Komiya was tapped out and added the last Goblin-Soldier to his team. Komiya untapped and doubled-up on Familiars.

Nobushita swung with all his men. The hippo forced one to blow up, and the Familiars blocked the other two. Nobushita wiped them both with Fire. However, Phelddagrif made sure he would make no further attacks.

The two played draw-go for awhile. Nobushita Absorbed a Harrow from Komiya to prevent his hitting the full Domain. Komiya came back with a Pernicious Deed that cleared Nobushita's side of the board. At ten, Komiya was sitting pretty. The hippo visited twice while Nobushita drew worthless Disrupts. On the final turn he aimed a Rage at Komiya, and tried to Disrupt into more burn. He failed, and Komiya took the match.