Round 15: Katsuhiro Mori vs. Masaya Mori 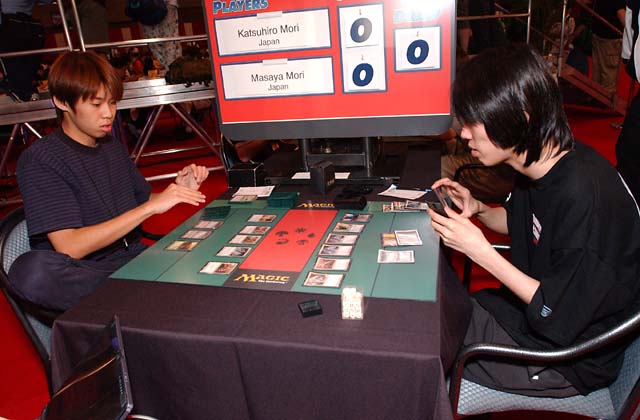 After scoring three Pro Points at Grand Prix-Taipei, Katsuhiro Mori is making a run at the Rookie of the Year title. Going into this round he is in sixteenth place, and if he can keep it up he will steal the title from struggling hopefuls Ken Ho and Lawrence "The Creecher" Creech. Standing in his way is two-time APAC Champion Masaya Mori, no relation. Both are piloting the same white weenie deck designed by Tokyo finalist Tsuyoshi Fujita. It's just trouble all around.

Masaya was forced to paris in game one, and kept his next one-land hand. It didn't develop until turn three, but Katsuhiro's draw was less than lightning. His Soul Warden met a Swords to Plowshares, and dueling Warrior en-Kor stared at one another.

Katsuhiro decided to risk it, and Armageddoned away four lands to two. Masaya pulled a plains off the top and the two traded hits. Unfortunately, Masaya's draws were cooperating, and though a Plow took down his Warrior, he had two more. He made a Soltari Monk, taking firm control of the game.

Katsuhiro turned it around. He stalled the Warriors with two Mothers of Runes, and made a Priest to protect the shadow flank. The buildup continued. Katsuhiro didn't have enough creatures to press, and without Mother of Runes, Masaya couldn't penetrate his defenses. His next attempt at one was thwarted with a Plow. Katsuhiro found another Warrior. Masaya Armageddoned in desperation.

Unfortunately, his opponent held plenty of land, and came across with one pro-white Warrior. Masaya tried to throw a wrench in the works with Empyrial Armor on his Priest and an all-but-all-out attack, but plenty of en-Kor and Mother of Runes ensured his victory. He topdecked an Armor of his own, and swooped through Masaya's nearly-empty board for the win.

Masaya kept a one-land hand again in game 2, and was punished for it. His Mother of Runes stared at an opposing one, as well as a Warrior en-Kor and a Meddling Mage blotting out Tithes. It wasn't really a game, as Katsuhiro played a creature on each successive turn. He only stopped attacking when Masaya's life total fell below zero.

This win continues to distance him from his Rookie of the Year competitors. Many already consider him a virtual lock.