Resident Genius Guillaume Wafo-Tapa well-known for his Constructed mastery, cemented himself as an all-around threat with a Top 8 in the Limited-format Pro Tour–Kuala Lumpur. He enters this round with three draws and a loss; two wins in a row will put him in his third Pro Tour Top 8. In a somewhat surprising twist, Wafo-Tapa is not playing his own deck in this tournament; his five-color control deck was designed by Magic Online savant Manual Bucher and uses Vivid Creek, Vivid Grove, and Reflecting Pool to play cards of every color of the Magic rainbow. 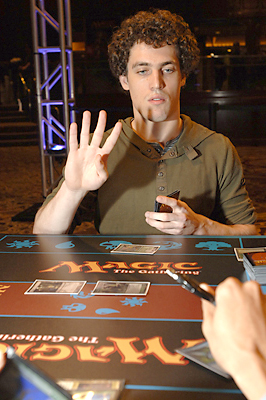 Aaron Nicastri is a man with a plan... Aaron Nicastri, on the other hand, is sitting with an impressive four-loss record in his very first Pro Tour. He hails from Sydney, Australia, and he won his ticket to California at a PTQ in Brisbane that he proudly says he “stole.” The island nation gets around five PTQs each season, with only one per state, and according to Aaron players in each state do their best to keep outsiders from stealing their PTQ. Aaron was fortunate enough to do just that, and is playing a green-black Elves deck with a twist: he has Bitterblossom and Gaea’s Anthem!

The first words from the always demure Guillaume were “High roll?” Aaron nodded and rolled higher, choosing to play. He mulliganed once, while Guillaume kept his seven.

Nicastri led with a Wren’s Run Vanquisher followed by a Llanoawar Elves, but lacked a third land. Wafo-Tapa sensed an opening, and used a Vivid land to make red mana and Firespout away the two Elves. Aaron had a Tarmogoyf to replace them, but still not another land. Guillaume evoked a Mulldrifter on his next turn, and Nicastri had nothing better to do while his opponent was tapped out than attack with a Mutavault and the Tarmogoyf.

Wafo-Tapa played a Wall of Roots and passed the turn with the Wall and three untapped lands, perhaps representing a Cryptic Command. When Aaron attacked with the Mutavault and Tarmogoyf, however he encountered an unpleasant surprise: Guillaume had a Makeshift Mannequin, which returned the previously evoked Mulldrifter. Wafo-Tapa moved to trade it for the Mutavault in combat, but Aaron was already packing up his cards in the face of Wafo-Tapa’s overwhelming card advantage. He had only two lands and a Tarmogoyf to Wafo-Tapa’s seven lands, Wall of Roots, and seven cards in hand, and decided that it wasn’t worth playing on.

Aaron chose to play first for Game 2. The action began with a second-turn Thoughtseize that revealed Wafo-Tapa’s hand of Shriekmaw, Kitchen Finks, Makeshift Mannequin, Oona, Queen of the Fae, and two Yavimaya Coasts; perhaps remembering the unpleasant surprise from Game 1, Nicastri took the Mannequin. He followed on the third turn with a Kitchen Finks, but predictably, Guillaume matched it with his own. Those two Finks traded -1/-1 counters, but Aaron was determined to maintain Finks advantage and played a second Finks and a Llanowar Elves.

Nicastri paused on his next turn, pondering a Nameless Inversion in his hand and Guillaume’s now-smaller Kitchen Finks. Wafo-Tapa had Cryptic Command mana untapped, so what was the best way to handle the turn? He chose to first declare his attacking creatures, then played Nameless Inversion on the Finks before Guillaume declared blockers. Aaron’s trepidation was validated when Guillaume did protect his Finks with a Cryptic Command, then used it to trade for his opponent’s Finks. 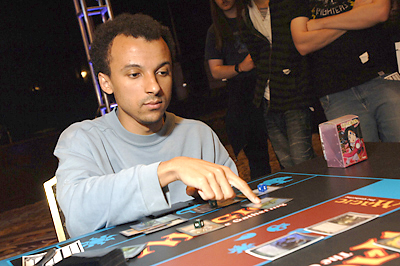 ...but Guillaume Wafo-Tapa beseeches the Queen.Guillaume rebuilt with a Mulldrifter, but Aaron had a five-mana Elemental of his own in the form of Shriekmaw that cleared the way for his second Kitchen Finks to keep attacking. Guillaume, still at an impressive 16 life, dropped the bombshell: Oona, Queen of the Fae. Aaron’s eyes widened as he sat up in his chair. Oona is immune to Shriekmaw and Nameless Inversion, so there wasn’t much Nicastri could do about it other than race.

Nicastri Thoughtsiezed Wafo-Tapa, taking a Shriekmaw and leaving Guillaume with two Vivid Creeks, Rune Snag, and a Cryptic Command. He followed with a Tarmogoyf, then hopefully made a futile-looking alpha strike that cost him his own Shriekmaw and dropped Guillaume to 10 life. His second alpha strike took his opponent down to 5 life but lost the Tarmogoyf. Aaron now had no hand, and Oona had been working her token-making magic, so he needed some impressive draws to get back in the game. The best his deck could do was a Gaea’s Anthem, and Aaron’s third alpha strike failed to do any damage at all and resulted in a dead Mutavault and Llanowar Elves.

Wafo-Tapa had by now accumulated ten lands, and he smelled weakness. For the next three turns, he simply attacked with Oona and played defense against Aaron’s meager attack force with Faerie Rogue tokens and a Wall of Roots. At a mere 6 life, Nicastri played a Bitterblossom, shook his head, and conceded rather than let Wafo-Tapa deal the killing blow himself.