Round 15: Lévy Reaches for a Bluff 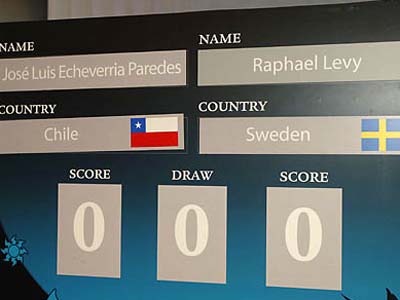 e're reaching the endgame now. Both Chilean José and French/Swedish (Sweden has apparently annexed Raph this weekend) Lévy were within striking distance of the final eight. In José's case, a win either this round or the next would secure his berth. Raphaël was in slightly tighter straits, as he needed both a win and a draw over the next two rounds to make it in. Clearly both players wanted to win here quite badly to (practically) lock themselves in. As one might expect, the crowd for this one was quite large, both for the high stakes and the chance to see fan favorite Lévy perform.

Despite the pressure, both players were amiable and communicative with each other. Even though Lévy was in a tighter contest, he still seemed easy-going and talkative. José stayed involved in the conversation, but his stiff demeanor implied discomfort or serious focus. Either way, both players got down to business once the round began.

Despite the extraordinary few turns this game lasted, Game 1 was characterized by some very subtle nuance. Lévy, playing mono-red, started extremely well with a Blood Knight on the second turn and an end of turn Sulfur Elemental on the third. José did nothing but play four lands, one of which was a key player in the matchup, Urborg, Tomb of Yawgmoth. Urborg-powered Tendrils of Corruption has been a major route to victory against the red decks all day. Raph, happy to see no Damnation, attacked with his 2/2 and 3/2. José pondered the attack step and decided to take all the damage, going down to 8. 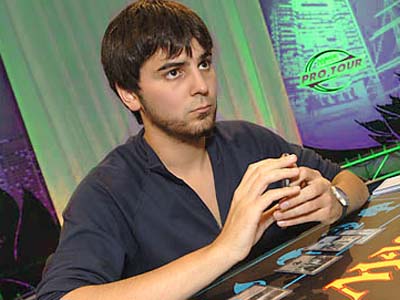 Win or lose, José Luis Echeverria Paredes has made an impressive run.

Why would José have kept a hand with no Damnation or Tendrils against an aggro opponent? The answer, it turned out, was he wouldn't. José played his Tendrils of Corruption at the end of Raph's turn. Lévy pondered and played a Sudden Shock on the doomed Sulfur Elemental, foiling José's life gain attempts. José did nothing again on his next turn, and the Blood Knight brought José down to 6. In response to an end-of-turn Mystical Teachings from José, Lévy tapped all 6 and double Fiery Tempered his opponent out of the game. José gave a sigh and picked up for Game 2.

After the match I asked José why he waited until the end of the turn to cast his Tendrils. José told me Raph's Fungal Reaches scared him. He wanted to keep Cancel mana open to protect against Stormbind. José said the matchup was slightly in a red deck's favor, due in no small part to the presence of Stormbind. The interesting part here is that Lévy isn't playing with Stormbind. His Reaches are for sideboard cards and (apparently) to fool opponents. The unintended bluff and/or a lack of being scouted paid off big-time for Lévy, and he was able to parlay his small-seeming advantage into a game win.

José, on the play, looked at a triple Damnation / Island hand and had to send back. The next one was a little sketchy in the mana department but was better than a hand of five. Lévy laid down his hand of five Mountains and two Fungal Reach and asked his opponent whether he should mulligan before smiling and shuffling for six. The next hand was land free, and then the hand after that. At four cards Raph found a hand that fit his exacting standards.

Yet for four cards, the hand wasn't bad at all. Mountains powered out Magus of the Scroll (!) and a pair of suspended Greater Gargadon. Lévy even had the Fiery Temper to take down a potentially backbreaking Shadowmage Infiltrator. The fourth land was right on time, and Lévy took out José's lone Swamp via Avalanche Riders.

José wasn't completely defenseless with a bunch of Islands and a Prismatic Lens, but it looked like Lévy had the advantage, even after the Magus ran into Teferi. Unsurprisingly, Lévy's next card, a Browbeat, dealt exactly five to the bemused Chilean. The turn after, Raphaël laid a land and stared at the board with his single card. What does one do against an untapped Teferi with five mana? ERON THE RELENTLESS THAT'S WHAT! WOO HOO! 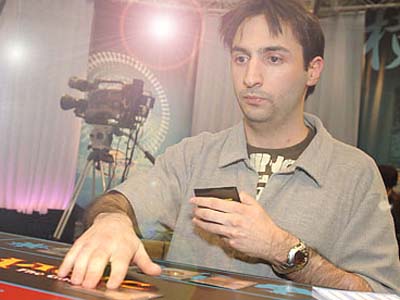 Raphaël Lévy has followed his induction into the Hall of Fame with a hell of a season—if you'll pardon my French.

The omni-cool timeshifted legend swung in, immediately receiving a Snapback. An end-of-turn morph implied an easy block the next time Eron came around. José could only look frustrated at his pair of Sudden Death, uncastable and sodden. Raph drew his fresh card, considered for a beat, and, due to the morph, attacked with just Avalanche Riders. A bold bluff? Perhaps it was, but that Teferi was extremely valuable as a suspended Gargadon stopper. José didn't want to risk his Zhalfirin, and he traded his facedown for the Darwin. Eron came down post-combat.

José finally drew his Swamp. Eron suddenly died, and in came Teferi to bring the life totals to José 8, Raphaël 4. With one counter on one of the Gargadons and three counters on another, Raph could instantly win this game with a topdecked Disintegrate for Teferi. It wasn't there, so Lévy played his Keldon Marauders and suspended Rift Bolt instead, making the life totals 7 all. José played another Sudden Death on the Marauders and attacked with Teferi, bring the life totals to 6-1. The resolved Rift Bolt brought José to 3, and Lévy, in a calmness most of us can only dream about, flashed another Rift Bolt to José, earning the Hall of Famer the game, the match, and (probably) his spot in the Top 8. The audience calmly applauded, although the Swedish contingent was heard to let loose a small whoop.

Editor's note: The play sequence in the last game was compressed, and Levy did not suspend Rift Bolt with Teferi in play. You can read Raphael's paraphrased answer in his Ask the Pro column from April 24.