Round 15: Mike Gilmore vs. Jon Becker 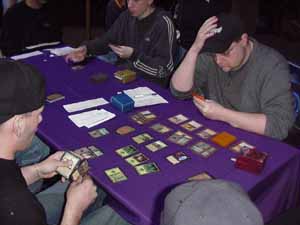 Mike Gilmore is a Boston local player who came to the event unqualified for Pro Tour Yokohama. He has two previous top 32 grand prix finishes, but he is looking for a top eight here.

Jon Becker is a lawyer from Philadelphia. As a member of defunct Tongo Nation, Jon has been playing Magic since before the world had ever heard of Zak Dolan. He has played in ten pro tours, but has yet to earn that breakthrough finish.

Mike has a black/green deck with beast and zombie tribes. It has a few tricks, but one of them is the incredible Tribal Forcemage.

Jon has a slow black/white soldier/zombie deck. It is light on removal but has excellent creatures.

While both players are normally very chatty and relaxed, they were completely silent as they shuffle up for the match that could get them the recognition they did not have before. Since both players are sitting at 10 – 3, a win for either of them could give them Top 8. 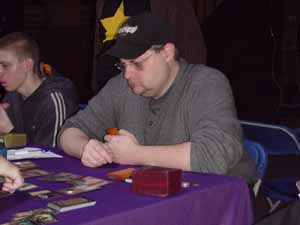 Gilmore won the die roll and chose to play. He led with a turn three morph, which was met by Becker’s Nantuko Husk. The morph came through for two damage and was joined by Symbiotic Elf.

On Gilmore’s next attack, Becker’s recently summoned Battlefield Medic managed to trade for Gilmore’s morph creature, but a fresh one promptly replaced it.

Becker brought out his Corpse Harvester, a creature that would allow him to tutor for his Skinthinner and help with his tight land situation. It promptly ate a morph that was chump blocking a Barkhide Mauler, fetching a Swamp and the Skinthinner.

The Skinthinner killed off the offending Barkhide Mauler and Jon gave itself up for another Swamp and Gluttonous Zombie. All the while, though, Gilmore was summoning and attacking with more creatures, bringing Jon down to 10. On his next attack, Mike unmorphed Tribal Forcemage, naming Elf to deal lethal damage. 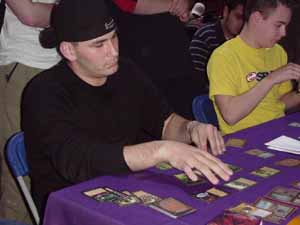 Jon chose to play first, but was beaten out of the gate by Gilmore’s turn two Shepherd of Rot. Both players played turn three morphs. Gilmore decided to try to end the game quicker by activating his Shepherd at Jon’s end of turn, continuing to do so throughout the entire game.

Jon tried to play the evasion game, employing a Dive Bomber, but that simply met Gilmore’s Swat. Jon tried some more evasion, summoning Aven Warhawk and amplifying it for two, revealing a Daru Lancer and a Grasslands Crusader. An unmorphed Sootfeather Flock joined the four-damage evasion creature. Suddenly Gilmore’s fourteen life wasn’t looking too impressive. He tried to get some offense going, but there just wasn’t enough time as the fliers came through for the win.

Mike opted to lead off, summoning a turn three Frightshroud Courier. The courier offers Gilmore what he lacked last game: evasion. Unfortunately for him, he was unable to follow it up with a high-powered zombie like Spined Basher of Fallen Cleric. For his part, Jon summoned a turn three morph and turn four Gustcloak Skirmisher.

On turns five and six, Gilmore brought out the most impressive feature of his deck. He cast Seedborn Muse on his turn five and Centaur Glade turn six. Suddenly, Jon was in danger of being mauled by a sea of centaurs. Knowing just close the end was, Becker unmorphed his Sootfeather Flock and powered it up with Crown of Suspicion, allowing him to attack for seven damage, reducing Gilmore to nine life and leaving lethal damage on the table for next turn.

Gilmore made more centaurs and brought Jon down to seven with more than enough to win if he had the opportunity. Becker saw the attack, and having no real way to play around Swat took a gamble and attacked. Gilmore did not have it and Jon took the match.