Round 15: Pour the Poison in my Ear

We were at the home stretch in Nagoya, so, as you would expect, we had Magic superstars battling in the arena for a spot in the Top 8. On the left sat Grand Prix Atlanta and Pro Tour Paris Champion Ben Stark. On the right was Grand Prix Tampa and Grand Prix Denver Champion Gaudenis Vidugiris. Two would enter. One would leave victorious… unless the match was a draw.

Vidugiris won the die roll and chose to play first. Vidugiris took a mulligan to six cards while Stark kept his opening seven. The first plays were Stark's Memnite and Vault Skirge on turn one. Vidugiris had neglected to play a spell on his turn, which allowed him to Virulent Wound the Skirge at the end of Stark's. Stark now had one poison counter. Stark attacked with his Memnite, which dropped Vidugiris to 19 life. Stark added Glint Hawk to the battlefield on the second turn.

Turn three showcased Inkmoth Nexus and Phyrexian Crusader from Vidugiris and Origin Spellbomb from Stark. The Spellbomb triggered Glint Hawk Idol and Vidugiris was attacked down to 17 life. Phyrexian Crusader and Inkmoth Nexus brought Stark up to four poison counters. This was a losing race for Stark, and he decided to add a Memnite to his side of the board and leave his team back on defense. This proved not to matter, as Vidugiris had a second Virulent Wound for Memnite and Piston Sledge for his Crusader. Stark activated Glint Hawk Idol for the block, but Dismember cleared the way. Six poison later, one from Virulent Wound and five from the crusader, and we were on to Game 2.

Still with no action, Vidugiris could only draw for his turn and pass back to Stark. Stark kept the beats coming and attacked with his team. Vidugiris attempted a Dismember but was thwarted by Stark's double Mutagenic Growth. Stark stood at 16 life with three poison counters, while Vidugiris dropped to 6 life. Vidugiris added a second Inkmoth Nexus to his board in hopes of defending himself from the onslaught of artifact creatures, but a Dispatch from Stark sealed the deal these players were on to Game 3.

Vidugiris chose to play first, and both players kept seven-card hands. Vidugiris laid a Swamp while Stark opened with Inkmoth Nexus, Memnite, and Signal Pest. Vidugiris played his second Swamp and a Mortarpod. Vidugiris used the Germ attached to Mortarpod to deal 1 damage to Stark's Pest. Stark played a Plains and attacked with Inkmoth Nexus and Memnite. Vidugiris went down to 19 life and up to one poison counter. 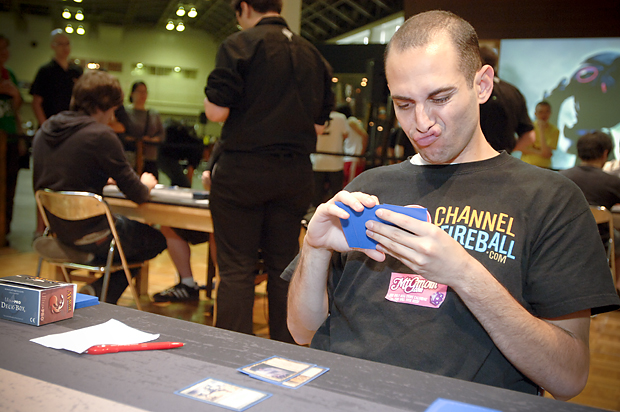 Vidugiris played an Inkmoth Nexus of his own and Phyrexian Crusader on the third turn, and Stark added Blade Splicer to his board. Vidugiris used Grasp of Darkness to clear the way for his Crusader. The Golem token went down and Vidugiris attacked Stark up to three poison counters. Stark swung back with his team of Memnite and Blade Splicer, dropping Vidugiris down to 18 life. Perhaps Stark would have left one of his creatures back if he knew what Vidugiris had in store on his turn. Piston Sledge entered the battlefield and snap-attached to Phyrexian Crusader. That, alongside Mutagenic Growth, brought the Crusader's power to 7. That meant seven more poison counters for the defenseless Stark, which brought his total to ten.