Nothing draws a crowd quite like Kai Budde. If he gets a win and a draw in the last two rounds here in Amsterdam, he will get up to double digit numbers of Pro Tour top eights. With White Weenie, Kai has been crushing all weekend, and at table 4, he was looking to be in a position to dream crush in the final round.

"All I've heard about this match-up is that it is pretty bad for me," remarked Conley Woods, who is probably not the first person to have felt this of playing Kai. Woods went from 8-0 to a heartbreaking 8-3 following a rough second draft, but his dream was, at least for moment, alive.

Kai won the roll, prompting a call of "great start" from Conley.

Budde kept his opener, and led with Flagstones of Trokair into Steppe Lynx. While he didn't have a second copy of the legendary land to get things really silly for turn two, he did have a fine follow up in Figure of Destiny and Student of Warfare for his second turn.

While Kai was filling the board with creatures, Conley's first creature was Noble Hierarch, and it stayed that way. Honor of the Pure came next, then a Knight of the White Orchid for Kai resolved, and the land it fetched, along with one from Kai's hand, made for some huge attacks.

"Neither of them are Brave the Elements"

Kai smiled and pointed to his deck.

Woods elected to leave Kai's hand as it was, and started to build up a base of blockers to get back into the game. A Tarmogoyf came down, which became just big enough to block successfully following a Bant Charm to put Student of Warfare on the bottom of Kai's deck. When Conley untapped, he had another Charm, leaving Kai with a more manageable team. 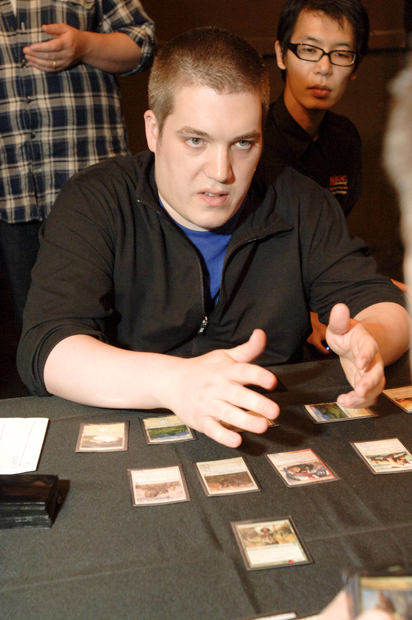 Kai Budde explains that that's a nice deck you've got there, and it would be a shame if something happened to it.

Just as Conley was building up his team, Kai was running low on cards. Having played so many one-drops, he was getting low on gas in the tank, and while he was able to bash Conley to 1, a Knight of the Reliquary came down and soon got pretty hefty. Meddling Mage briefly made an appearance before chump blocking, while Knight of the Reliquary set up some Celestial Colonnade attacks.

Kai's draws remained live every turn as he dug for a Brave the Elements, but when a second Knight of the Reliquary joined Conley's side of the board, things looked bleak. Conley committed a Jace, the Mind Sculptor to the board, and started going to work on the top of Kai's deck. Kai's team was not able to find that last point, and the German Juggernaut found himself a game down.

As the players looked through their decks to sideboard, Conley casually asked if Kai was likely to show up to many more events this year.

"If I do well here, then I might go to Worlds."

At only three losses on the tournament with two rounds to go, it wasn't quite clear how well Kai would need to do to consider his performance good.

On the play, Budde had a mulligan. Conley looked at his hand, thinking for a little.

"I will take a mathematical keep."

Kai frowned. Is that a thing? It was enough of a thing for Conley.

If Conley had hoped that a mulligan on the play for Kai might have helped him, he was out of luck. A turn-one Steppe Lynx was followed by a turn two fetch land into a pair of copies of Student of Warfare. Honor of the Pure followed soon after, and when those Students levelled up, even the Rhox War Monk Conley had could not stop them doing their thing.

Kai had Ranger of Eos for a Student of Warfare and Figure of Destiny, playing around a potential Meddling Mage from Conley. As it was Conley had a pair of copies of Meddling Mage, stranding the creatures in Kai's hand.

Ultimately though, Kai was able to break through with Brave the Elements, levelling the score in brutal fashion.

This time it was Conley on the mulligan, showing a hand without a way of casting any spells, due to awkward mana. He led with Celestial Colonnade, and looked on as a turn one Steppe Lynx hit for Budde.

"Can I name Plains?" asked Woods jokingly as he cast a turn-two Meddling Mage. In the end, Conley named Honor of the Pure, and looked a little sad as a fetch land allowed a pair of copies of Figure of Destiny for Kai. 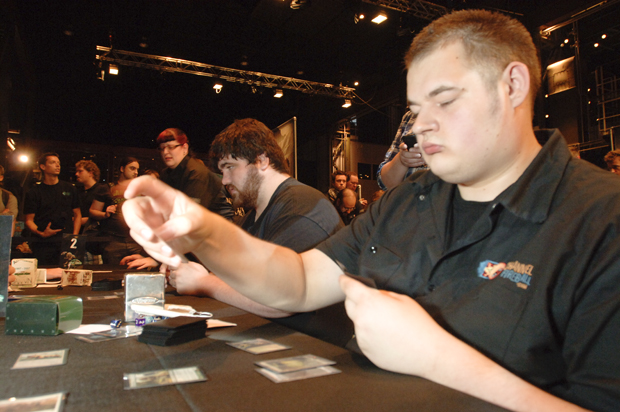 Conley Woods closes his eyes and trusts in the power of the Force.

While Woods had a Mana Leak for Knight of the White Orchid, he had nothing to stop the gradual levelling of Kai's team, and the gradual whittling down of his own life total.

While Game 1 had been a real fight, it seemed that the fight was gone from Conley Woods. As he looked at lethal damage on the table, he extended his hand.

1 Path to Exile 4 Brave the Elements

2 Rule of Law 2 Lapse of Certainty