Round 15: Sam Gomersall vs. Gabriel Nassif 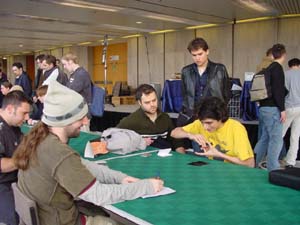 Sam is the closest hope to a gravy trainer that Britain can boast of at the moment, and with 19pt points Sam only needs either top 16 here, or top 128 at Yokohama to stay qualified. His opponent the lively Frenchman Gabriel Nassif is renowned for his English crushing skills, and is one of the more flamboyant Frenchmen on the circuit.

Game 1 was missed, as the feature match for this round was going to be Alex Witt vs. Raphael Levy. They agreed to split, and ID, which could have possibly knocked Alex into 9th. Rather than leave the round uncovered I dashed over to cover Sam and Gabriel, who were both playing for Top 8, just in time to see Sam scoop up his cards.

He said only 2 words "Unanswered Sparksmith"

In the run up to game 2 there were many Jokes made about Gabriel Nassif and his "Protection from English ability." He has yet to lose a Match that matters against an Englishman.

Sam decided to play first, and kept his 7 card hand, as did Gabriel, who opened up play with a turn 1 Sledder. Sam busted out a Morph on his turn 3, and Gabriel played his 3rd land, and passed the turn. Sam attacked for 2 and made a Thoughtbound Primoc. Nassif answered in great fashion with a turn 4 Sage Aven, looking to either steal or block the Primoc. 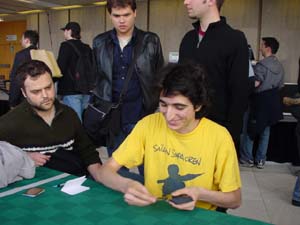 Sam thought long and hard at end of turn, but in the end untapped, and unmorphed his Nameless one with the Primoc Ability on the Stack. With nothing else to do, he passed the turn.

Gabriel's next turn was a peach, casting a Sparksmith and a Lavamancer's Skill on his Sage Aven to shoot the Nameless One. Sam cast pinpoint Avalanche on the Aven during his Upkeep to try and keep the Primoc, but Gabriel sacrificed both Goblins to keep it alive and stole the Bird Beast. On Sam's next turn he was forced to kill his own Primoc with the a Crested Craghorn to try and slow the beats from a Skirk Outrider Gabriel had summoned, but Nassif had a Battering Craghorn and on the next turn managed to attack Sam down to 11.

Sam made his Chromeshell Crab Morphed, and a Mistform Dreamer in the vain hope Gabriel would shoot the wrong card with the Sage Aven, letting Sam steal the Bird. Gabriel did not take the bait, and 2 turns later attacked for the win.