A pair of up-and-coming Japanese players, Ken Yukuhiro and Naoki Nakada both enjoyed Grand Prix success last year. Yukuhiro posted a Top 4 performance at Grand Prix Kitakyushu, while Nakada walked away with the trophy at Grand Prix Manila, beating Yuuya Watanabe in the semifinals along the way.

Yukuhiro is playing a green-blue-white deck called Death Snow, while Nakada is playing a new-style Caw-Go deck. Whoever wins this match will need only a draw to advance to the Top 8. 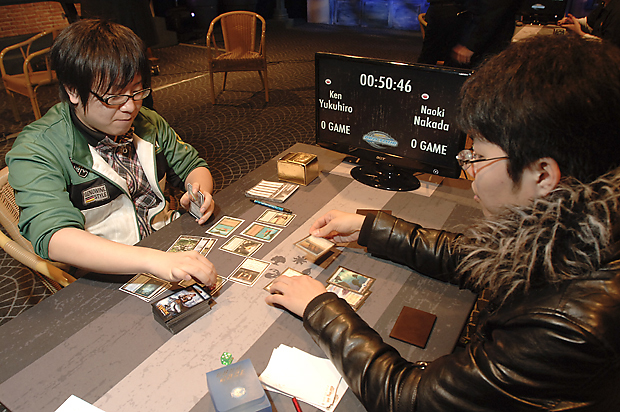 Ken Yukuhiro and Naoki Nakada battle for the chance to represent Japan in the Top 8.

Nakada Preordained, and Yukuhiro answered with Birds of Paradise. Nakada stocked his hand with Squadron Hawks. Yukuhiro went farther, first tapping two for Lotus Cobra, then playing a land for two more for Stoneforge Mystic, tutoring up Sword of Feast and Famine. Nakada played a Colonnade and a second Hawk, holding back his creatures.

Yukuhiro seized the opening to get Jace, the Mind Sculptor into play off a fetchland. He Brainstormed, and then used the two mana he had left over to play out Llanowar Elves and Birds of Paradise. Nakada sent his Hawks at Jace and played two more, tapping out again.

Yukuhiro counted his mana. His hands were shaking from nerves. He scryed with Jace to get him to three loyalty. After a moment's thought he brought out Sword of Body and Mind and put it on his Stoneforge Mystic, swinging in and killing a Hawk. He moved the Sword over to his untapped birds after combat.

Nakada sent his squadron at Jace again, but the equipped Birds could block one to keep Jace on the board. Nakada cleaned house with Day of Judgment. Yukuhiro's Sword was lonely with no one to pick it up. He Brainstormed with Jace and passed the turn. Now the Celestial Colonnade could come over and finish off the planeswalker.

Unfortunately for Nakada, Yukuhiro was quite Jacey. He played another Mind Sculptor and scryed away his top card to put him out of Colonnade range. Nakada dropped Jace back to one loyalty and passed his turn. Yukuhiro Brainstormed again, this time coming up with Sword of Feast and Famine, but still no-one to pick it up. Nakada was happy to send Jace to the bin on his next turn. 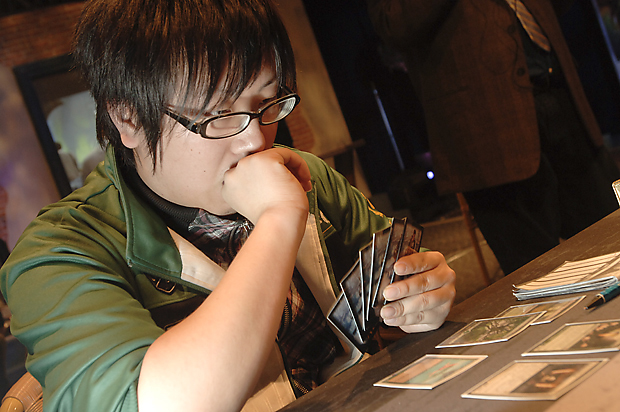 Naturally, Yukuhiro held a replacement. He declined his top card and passed. The Colonnade did its job, leaving Jace at one loyalty, and now Nakada had mana left over for a Stoneforge Mystic, but Yukuhiro was ready with Mana Leak. At last, a Jace Brainstorm for Yukuhiro yielded a Lotus Cobra, and he gave it a Sword to hold. Nakada tried a Tumble Magnet, quickly Negated, but also had Journey to Nowhere to eliminate the threat.

Yukuhiro kept on Brainstorming. This time Jace turned up Birds of Paradise, who quickly picked up both Swords. Somehow Nakada still had gas in the tank, and six mana completely flipped the game thanks to the backbreaking Sun Titan, bringing back Sun Titan. Yukuhiro used Jace's 0-loyalty ability again and cast a pair of Stoneforge Mystics, bringing his Sword count up to four.

Nakada swung at Jace with his Sun Titan, getting back Stoneforge and finally getting him a Sword of his own. One of Yukuhiro's Mystics stepped in the way. Nakada tried to ratchet up the unfair with Gideon Jura, but Yukuhiro had Negate. Still, Yukuhiro's way was dismal. He binned his Jace to bounce the Sun Titan, but still couldn't get a meaningful attack in thanks to the Magnet. The Sun Titan came back down, this time getting Squadron Hawk. After the Magnet tapped down his Birds of Paradise, Yukuhiro put all his Swords on his Stoneforge Mystic to keep the Sun Titan at bay, but it was hardly enough. The Colonnade picked up the Sword of Feast and Famine and bashed in, then Nakada played Elspeth Tirel and gained some life, just because. Yukuhiro had had enough.

Yukuhiro had no early acceleration this game. He Negated a turn-two Preordain from Nakada when it looked like Nakada needed lands, but Nakada had lands in hand. Yukuhiro untapped and boldly played Jace, the Mind Sculptor in the face of Nakada's untapped lands, and Nakada held no counter. Yukuhiro Brainstormed and passed the turn.

Nakada played a Jace of his own to get Yukuhiro's off the table. Yukuhiro's fifth land came into play tapped and he passed the turn, watching as Yukuhiro played a Sword of Feast and Famine. He responded with Gideon Jura, but Nakada went one better with Sun Titan. Yukuhiro let Gideon attack for 6, then played Thrun, the Last Troll with regeneration mana up. 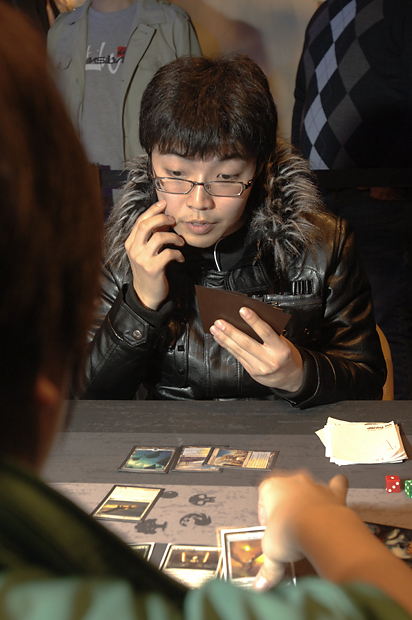 Nakada's Hawk looks lonely, but not for long.

Nakada untapped and put the Sword on his Titan. He also got rid of Yukuhiro's only untapped blue source with Tectonic Edge, and Yukuhiro jumped the gun. He not only floated mana with the intent of putting a regeneration shield on the Troll, he also hit the Sword with Nature's Claim. When Nakada attacked with his Titan, he got the Sword right back into play. He re-equipped it after combat.

Yukuhiro animated Gideon again, then cast and equipped Sword of Body and Mind and charged in. Nakada was happy to see his graveyard fill up with goodies for his Sun Titan. He untapped, animated his Colonnade and hit with that and his equipped Sun Titan, then used his bonus mana to play his own Gideon Jura. That earned the concession from Yukuhiro.

1 Into the Roil 1 Deprive

4 Day of Judgment 3 Jace, the Mind Sculptor 3 Leyline of Sanctity