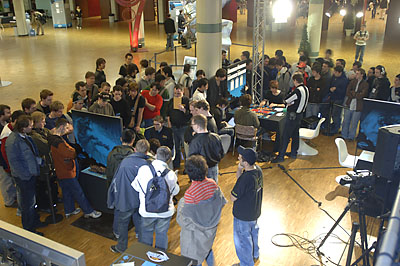 A huge crowd gathered around the feature match pit.oing into the final round, there were still many players playing for Top 8. Kenji Tsumura wasn't playing for his Top 8 though. That spot was assured. He was playing against Sebastian Thaler specifically to improve the chances of his friends and countrymen Tomohiro Saito and Katsuhiro Mori, who with the right results could both potentially make it into the Top 8. The tension was heightened by Mori and Saito being only a few feet away at another feature match table.

Sebastian won the roll but had to take a mulligan on the play. Kenji had a turn-one Minstab suspend, with a Feebleness all ready for Thaler's turn-two Thick-Skinned Goblin. He built his mana base with a Foriysian Totem and Prismatic Lens before laying a Thick-Skinned Goblin of his own, just around the time that Thaler was hitting his third land.

Mindstab hit Brute Force, Brine Elemental, and Draining Whelk after Thaler played his morph for the turn and passed. The morph was deemed good enough that it didn't block Thick-Skinned Goblin, and with his little man safe, Kenji played Flamecore Elemental without having to worry about the echo. Very much on the back foot, Sebastian played another morph and passed.

Knocked down to 13, Thaler played Prodigal Pyromancer and passed. He took another hit from Flamecore Elemental and looked disconsolately at his hand, which was just a single Plains that got played before the German passed. A Feebleness killed the pinger, and Flamecore Elemental rumbled in again.

Thaler looked at one of his morphs and was forced to block. It was Akroma, Angel of Fury. Sad times for Thaler, as his Angel died without ever having a moment to shine. The following turn, when he drew nothing, Thaler scooped them up and went to his board for Game 2.

For the second game there were to be no mulligans, and Thaler led with Looter il-Kor, which was hit with a quick Feebleness. It was followed up by a morph, which got in for two when Kenji elected not to block with a freshly played Flowstone Channeler. Primal Plasma (as a 3/3) was the next of Thaler's curve of creatures, and it soon became the only one in play when Kenji used an Assassinate on the morph - which turned out to be a Brine Elemental.

Thaler played Prodigal Pyromancer and passed. The Wizard was not going to live long, though, as Flowstone Channeler gave it +1/-1 and enabled a Reckless Wurm to be played via madness along the way. The new threat crashed in and was soon joined by the Thick-Skinned Goblin that made the Flamecore Elementals in Tsumura's deck so effective.

A second attack from Arrogant Wurm met a Bogarden Rager, which traded happily with Tsumura's color-shifted monster. Thaler then followed up with a Battering Sliver. Battering Sliver is one of the new breed of Slivers that doesn't really need its friends around to be good - it's quite the threat on its own.

Of course, as had become customary for the match, Kenji had an answer, in the form of Feebleness, a block from Thick-Skinned Goblin (who gained protection from red), and a Flowstone Channeler activation. The life totals were 13 to 16 in Thaler's favour, but it was definitely the former Pro Player of the Year who seemed most at ease with the way the game was progressing.

Kenji played a Mindstab into Draining Whelk but batted not an eyelid, using his Flowstone Channeler to kill the potentially troublesome flyer with its comes-into-play ability on the stack.

The next move from Thaler was to reload the board with powerful creatures. His choices were Flamecore Elemental and Prodigal Pyromancer. How he hoped his pinger to survive Flowstone Channeler was uncertain, but one way or another he seemed desperate to commit some sort of threat to the board. Kenji played a Basal Sliver and passed, allowing the Pyromancer to become active. He could rest unconcerned, without obvious targets for "Tom's" ability and with a card in hand to use if needs be. As it turned out, though, that last card was a Feebleness, which was put to better use killing Thaler's Primal Plasma when it attacked and was blocked by Basal Sliver. It wasn't until the following turn that the Pyromancer was killed by Kenji's pseudo-pinger.

Thaler's Flamecore Elemental had stuck, and it looked that it might make it all the way, taking Kenji to 3 on an attack that followed Riftwing Cloudskate to bounce one of Kenji's team. A morph followed, and depending on what it was, there was potential for the match to make it to Game 3. This wasn't what Kenji was hoping for. He played a Flamecore Elemental of his own, but with 2 damage coming in the air and the Japanese player almost out of cards in hand to deal with it, it seemed somewhat inevitable. Tsumura went to 1 and drew for his turn. He carefully surveyed his graveyard and ultimately scooped it up. Thaler was still in the fight. 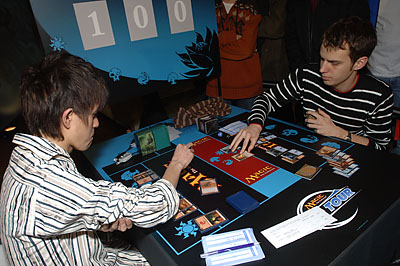 Kenji showed no remorse until after the match was over.

For the deciding game, both players had a mulligan, but it was Kenji who seemed most immediately to draw out of it. While Thaler had a turn-two suspended Riftwing Cloudskate, he didn't have another land to go with his turn-three suspended Veiled Oddity.

Kenji, meanwhile, had Urborg Syphon-Mages on turn three and turn four, and while he only had Swamps, he did have a Foriysian Totem to fix his mana. Riftwing Cloudskate bounced the Totem, but was quickly dealt with by a Feebleness from Tsumura. Thaler had just an Island and a Plains, and looked visibly shaken with his situation. Eventually he drew a Mountain and made a morph, but this creature (which turned out to be a Slipstream Serpent) was forced to block and trade with a Syphon-Mage almost immediately to keep Thaler, who was now at 10, in the race.

Kenji looked critically at his hand before playing the potentially game-ending Coal Stoker and Flamecore Elemental all in one turn. Thaler had a Prismatic Lens, but that really wasn't the answer that he needed as his time was running out. Kenji's two red creatures ran into the red zone. Thaler blocked the Elemental with his Veiled Oddity, and used Brute Force to keep his blocker alive and kill the big red man. He then looked to have turned things around with Numot, the Devastator, but it took Kenji barely a second to play his Cradle to Grave. On his turn, he followed up with a Mindstab to clear out Thaler's hand. From here, Foriysian Totem could mop up Thaler's remaining life points.

Thaler drew his card for the final turn and dropped the land in his hand on the table. It was all over. Tsumura, who had been stonefaced and calm, looked a little shaken as he reached for the results slip that sealed Thaler, a friend from the GP circuit, out of the Top 8. Kenji looked across to his teammates and signed the result.